(Photo by Cecille Joan Avila / Partners In Health)
Natacha Jean Paul stands outside her room at Kay Manmito, the maternal waiting home at University Hospital in Mirebalais, Haiti, that welcomes women with complicated pregnancies or mothers with newborns in the NICU.

This pregnancy was different.

Natacha Jean Paul had already given birth to three girls, so she thought she knew what to expect while expecting. But the 39-year-old mother began feeling unbearable pain while seven months along. No matter how she shifted her body, her baby lay in an awkward position.

She visited a hospital near her home in Port-de-Paix, a coastal community along Haiti’s northern shore. Doctors there recommended she travel to the capital of Port-au-Prince for specialized care. But that was half a country away and the price of public transportation would cost her dearly. Her sister, who is a trained nurse, recommended she travel to the closer University Hospital in Mirebalais, Partners In Health’s 300-bed teaching facility in the Central Plateau that offers free care.

Paul arrived at University Hospital on Sept. 18, 2017, and was seen by an OB-GYN, who confirmed that her baby boy was breech, or not head down. She also learned he was hydrocephalic, meaning his head was abnormally large from a buildup of fluid on the brain. The doctor recommended she stay nearby so that staff could monitor her risky pregnancy.

Normally, staying nearby would have been impossible for Paul. She had no family in MIrebalais, and she definitely couldn’t afford two months of lodging as she waited for her Nov. 23 due date.

Luckily, Zanmi Lasante, as PIH is known in Haiti, had a new maternal waiting home to accommodate women in situations like Paul’s by providing free lodging at the University Hospital campus. Paul was admitted that same day, given a welcome kit including basic toiletries, and settled into a room she shared with two other expectant mothers.

Since opening in February 2017, Kay Manmito—“mothers’ house” in Haitian Creole—has welcomed 420 women with complicated pregnancies, along with mothers whose newborns were in the hospital’s neonatal intensive care unit (NICU). They come from all over Haiti, traveling from Cap-Haitien in the north to Léogâne and Les Cayes in the south. The facility will eventually host 44 women at a time—12 expectant mothers, 18 NICU mothers, and 14 mothers participating in kangaroo care.

Once key infrastructure is in place, kangaroo care will begin May 2018 and will allow mothers of premature infants to stay in the same room as their babies so they can maintain constant skin-to-skin contact, which helps underweight newborns regulate body temperature and feed more frequently.

A nurse auxiliary is always on hand at Kay Manmito to answer women’s questions, take vital signs, and help determine when labor has advanced enough to go to the delivery ward. Other PIH staff visit daily to offer educational sessions on topics such as breastfeeding, nutrition, breast exams, and more. Thursday afternoons have featured prenatal yoga, taught by Amos Sampeur, a program assistant. Staff also have taken the women to a nearby hotel pool to cool down on particularly hot days, and organized plays to recognize special occasions, such as Mother’s Day or Christmas.

Residents get three meals a day, eaten in a communal dining room. Before a recent lunch, the women broke out into song—as they do before every meal—to bless the food and each other. Staff said most women share their stories and possessions with each other, creating a home away from home. 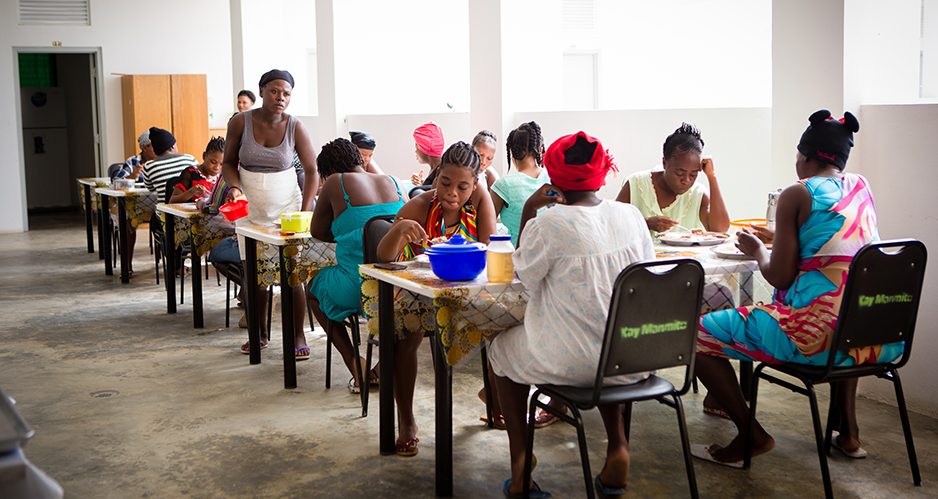 (Photos by Cecille Joan Avila / Partners In Health)
Women staying at Kay Manmito share meals three times a day, only after singing a prayer of blessing.

“The mothers are really proud about Kay Manmito and the way we treat them,” said Sophonie Joseph Sylvestre, the maternal home’s director. “They feel like they’re part of a family.”

Kay Manmito is an anomaly in Haiti. Roughly 40 percent of women still give birth at home, often without electricity, running water, or a sterile birth kit. There is no doctor, surgeon, or anesthetist on hand, either, in case an emergency cesarean section is required, for example.

But many health centers are not properly equipped or staffed for deliveries either, a fact that doesn’t encourage women to give birth there.

All of these factors translate into dangerous situations for Haitian women, who have a 1 in 90 chance of dying during or after childbirth. In Canada, that risk is 1.1 per 10,000.

The million-dollar-question is: What must happen to prevent maternal death in Haiti?

As every woman who has given birth knows, babies don’t arrive on anyone’s schedule but their own. False alarms and premature labor are common everywhere. Expectant mothers in Canada, for example, often make several trips to the hospital before “real” labor begins.

Most Haitian women don’t have that luxury. They can’t afford multiple trips to their local health facility whenever they suspect labor has begun. Instead, they pack a small bag and trek to the closest clinic or hospital as their due date approaches and wait—sometimes sleeping outside for days in anticipation.

When University Hospital opened in 2013, staff frequently saw full-term pregnant women camped overnight on the cement sidewalks and courtyards. Mothers of NICU babies slept outside the ward so they could be available for regular care and feedings. There had to be a better solution—for mothers, babies, and the hospital. 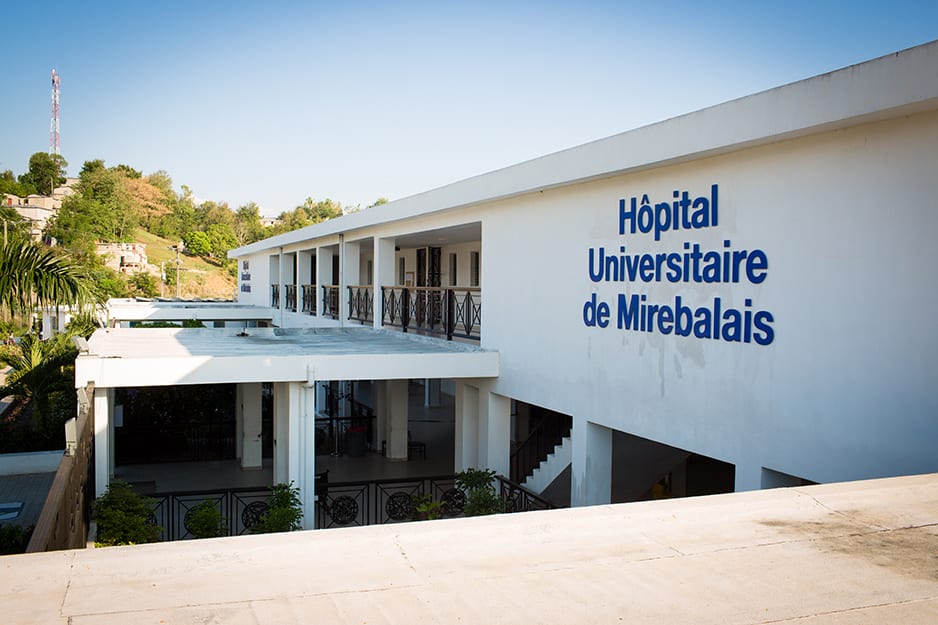 (Photos by Cecille Joan Avila / Partners In Health)
The front entrance at University Hospital in Mirebalais.

Kay Manmito was born out of that need, and inspired by the success of similar facilities in other countries where PIH works. Having maternal waiting homes near health facilities in Lesotho, for example, has increased the likelihood that expectant mothers will give birth at those facilities rather than at home, dramatically improving their chances of a safe delivery.

In the PIH-supported districts where Lesotho’s national health reform is taking place, the rate of facility-based deliveries has doubled in just four years, from 25 percent in 2013 to nearly 50 percent in 2017. Each clinic and hospital is home to a maternal waiting home where expectant mothers stay until labor begins, just like Kay Manmito.

Sylvestre said many women who have stayed at Kay Manmito found it clean and comfortable, and the staff welcoming and friendly. They enjoy the food and camaraderie and participate in the educational activities. One mother, she remembered with a smile, was disappointed that her c-section got scheduled earlier than anticipated. She was so comfortable that she wanted to stay longer.

After delivering in the hospital, most mothers swing by Kay Manmito to show off their newborns before returning home. Those are joyous occasions—new mothers beam, and pregnant residents realize that, someday soon, they too will cradle newborn daughters or sons. But there also are tragic moments, when mothers who have lost their babies return to the waiting home, pack up their things, and leave feeling hollow. Not every story has a happy ending.

For her part, Paul had faith that everything would turn out alright. She was five days away from her due date and feeling heavy, but hopeful. She had enjoyed her stay and marveled at how much it would’ve cost if she had had to pay for the free, comprehensive care she’d received so far.

“The care found here,” she said, “is priceless.”

Keep up to date

Yes, please sign me up to receive email updates about the important work of Partners In Health Canada.