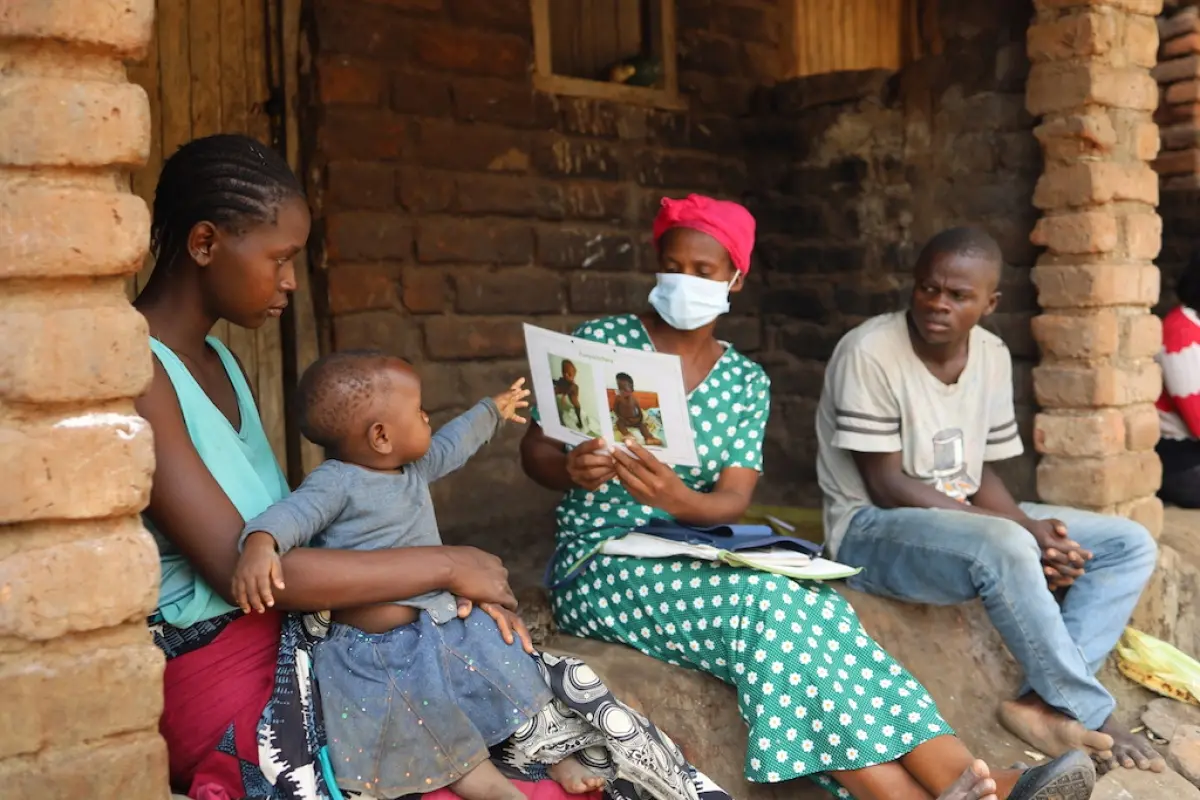 For Catherine Benito, a community health worker (CHW) in Neno District, Malawi, Cyclone Ana may have ripped out an entire wall of her home in January, but it didn’t stop her regular visits to 26 households nearby.

Benito, a divorced mother of four children, has been a community health worker for six years, making the rounds by foot through Neno, an impoverished, rural area with about 140,000 residents, still incomplete tarmac roads and scarce electricity. She visits each household once or twice a month, she said, speaking in Chichewa translated into English. If someone in the home is sick—with HIV or diabetes, or if she hears of pregnancy complications or a child appears malnourished—she visits more often.

This so-called “household model,” in which CHWs tend to everyone living in the house whether they are ill with a specific disease or not, represents an evolving approach to care and was designed in partnership with communities. From Benito’s perspective, it’s effective. “Now people don’t wait until they are very sick to go to the hospital,” she said. “We can identify the disease faster…and refer people to where they can access treatment.

Everyone Under One Roof

A study published in BMJ Global Health in September 2021 found various benefits from this “household model” compared to an earlier approach in which CHWs were assigned to visit individual patients already diagnosed with a specific illness. Under the new model, many more residents enrolled in health care, the study found, and fewer dropped out of the system.

But even before the research study concluded, it became clear that accompanying all members of the households made sense, said Dr. Chiyembekezo Kachimanga, chief medical officer of Partners In Health Malawi, or Abwenzi Pa Za Umoyo (APZU), as PIH is known locally.

Now, each of Neno District’s 1,228 CHWs visit and monitor households, offering check-ins and medical and social support as needed to everyone under one roof.

“I think the biggest takeaway is that every house—whether they have an illness or not—has a community health worker,” said Kachimanga. “Most programs are geared to specific conditions, so if you’re not sick, you’re not visited. Here, the work of the CHW is not narrow, it’s broad, they are monitoring eight disease conditions, and they do other things. If they see that people require other medical intervention, the CHW can help.”

The flexibility to address what’s needed is built into the household model, clinicians said. For instance, during the recent cyclone, about one-fourth of CHWs reported some losses, and about 179 of them received food packages, household items, or other support. “Otherwise for the rest, work is continuing as normal,” said Kachimanga. A number of CHWs also worked at the camps for displaced people set up in the district, offering referrals for psychosocial support, medical supplies, food, and other basics.

CHWs as Core of Primary Care

As part of the study, CHWs are assigned to visit 20 to 40 households each month, focusing on a set of priority conditions, including HIV, TB, pediatric malnutrition, maternal and child health, and non-communicable diseases. Additionally, pregnant women were enrolled in primary care programs and any symptomatic individuals were accompanied—literally walked— to the nearest health facility to help them navigate screening, care, and treatment. Certain patients, like those with HIV and other chronic conditions, were seen more frequently.

The study had significant findings for patients with chronic diseases, such as HIV, or a non-communicable disease (NCD) such as diabetes or asthma. The household model approach reduced the monthly “default” rate – when patients are lost to care – by approximately 20%. This amounts to about 1,200 additional patients being retained in care and treatment every year and has great potential for impact because this program continues to rapidly grow in Neno and currently cares for more than 15,000 patients with HIV and/or an NCD.

Dr. Emily Wroe, the study’s lead author, and now a PIH senior advisor on COVID-19 response, said the research led to several important findings. First, she said, under the household model, CHWs helped more women get antenatal care early in pregnancy. This connected women throughout pregnancy to routine care, such as checkups and accessing vitamins, and, when complications arose, enabled swift action since the women were already linked to a health care system.

This type of research, a stepped-wedge randomized controlled trial, is a big deal for understanding the impact of the CHWs and the household model. But the team was confident it would work and had an earlier success story in mind when formulating the new study: a program providing ongoing CHW support to patients with HIV in Neno led to high treatment and retention rates. Indeed, as of late 2021 in the Neno district, 94% of people living with HIV (ages 15-49) were enrolled in life-saving antiretroviral treatment; in 90% of these patients the virus was undetectable.

The recent study was fashioned to achieve that level of impact for all other conditions: household support means identifying problems early, whether it’s adherence to medication regimens, dealing with side effects, or missing medical appointments.

For Benito, the CHW, there can be a few bumps in the system. Sometimes, she says, if no one is sick in the household, families can be reluctant to open their homes to her. “But we are able to continue to visit,” she said, “and it helps the community.”

Recently, a woman in one of Benito’s households was complaining of weakness and fatigue. Benito urged a medical appointment, but doctors found nothing and sent the woman home. Still, she told Benito, she continued to feel unwell and began suffering from numbness on one side of her body that ran down her leg. Once again, Benito arranged for a hospital visit. This time the woman was diagnosed with high blood pressure and put on medication. “Now,” Benito said, “she is starting to feel better.”