The Rise of a Lifesaving Blood Bank in Sierra Leone 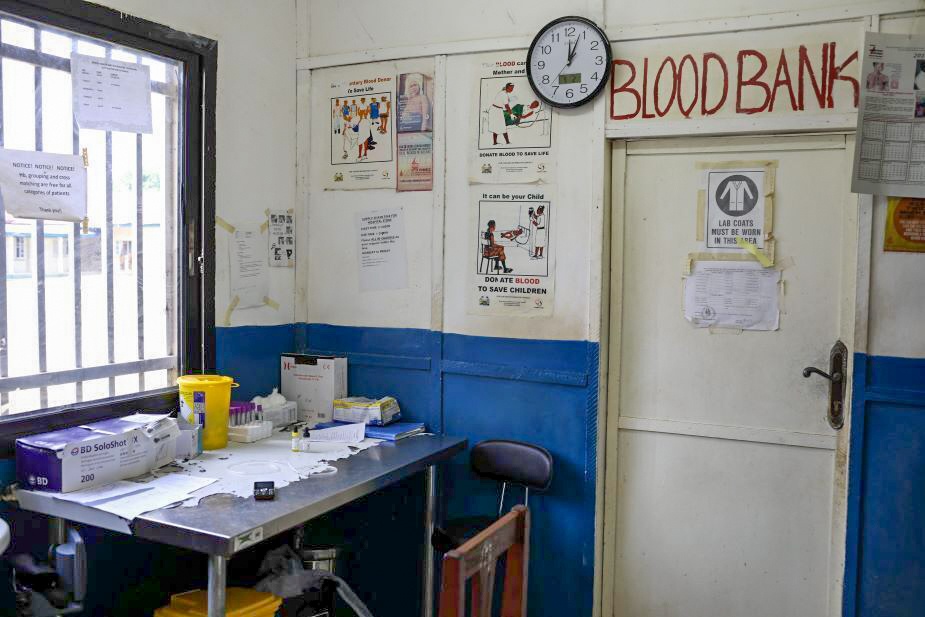 “Limitless,” said Nurse-Midwife Isata Dumbuya, describing the access she had to blood as a clinician working for the United Kingdom’s National Health Service. “As many units as you needed would be available at the drop of a hat.

“It’s a real life-changer in the maternity unit,” she continued. “When a woman starts bleeding, whether it’s during or after pregnancy, there are a lot of drugs and maneuvers that can hopefully stop the bleeding. But if she’s still bleeding, she needs to have replacement. If you cannot get her this blood, then ultimately she would die.”

In wealthy nations with well-resourced health systems, where blood banks are stocked, and transfusions are an unremarkable part of clinical practice, this fatal consequence is rare. In a poor country like Sierra Leone, it’s an unjust norm. One key fact behind the country’s unmatched rate of maternal mortality—women in Sierra Leone face a 1 in 17 lifetime risk of dying in pregnancy or childbirth—is that most health facilities are without a functional blood bank. And even if such a facility exists, clinicians often lack the training on how to properly perform a transfusion, let alone enough blood to freely provide one to every patient in need.

Limited is the best descriptor for blood bank services in Sierra Leone.

But for clinicians like Dumbuya, who since 2018 has managed the maternity ward at Partners In Health-supported Koidu Government Hospital (KGH) in Kono District, this reality is changing. And for the women she and her team care for—as well as patients in the pediatric and emergency wards, the other departments most in need of access to blood—health outcomes are changing, too.

Thanks to PIH’s partnership with the Sierra Leone Ministry of Health, and its investments in the KGH blood bank, made possible in part through the support of Global Affairs Canada, safe transfusions are widely available. What once was a single, unreliably cold refrigerator has turned into what Dumbuya called “a real game changer for us.

“Nine times out of 10 that we need emergency blood, we have it,” she said. “It’s saved countless lives.”

Before PIH’s support, blood transfusions were few and far between at KGH, regardless of how many patients needed blood to survive, such as women suffering postpartum hemorrhage, victims of car accidents, and severely anemic children. The refrigerator kept in the hospital’s clinical lab typically held only a handful of units of blood at any given time—up to 10, if clinicians were lucky.

“Imagine,” Dumbuya said, “you’ve only got 10 units of blood for the month, for the whole hospital. There was always a limit on how much one department could use without having it replaced.”

A lack of staff, stuff, space, and systems were to blame for the constant shortage. Served by the national power grid, KGH had spotty access to electricity, so blood often went too long unrefrigerated. Supplies like reagents, blood bags, and tubing were often out of stock, preventing safe blood collection and screening. Blood bank staff had to share a space with other lab services. Too few systems were in place to ensure the blood’s adequate collection, safe delivery, and transfusing. And the one community blood drive held every six weeks didn’t collect enough blood to comfortably stock the bank.

Meanwhile, Dumbuya recalls the era when clinicians, without a specialized blood warmer, would run a bag of blood under hot water, ruining the integrity of the cells and the overall safety of the transfusion. Or the countless times clinicians would give a patient blood at the wrong time.

“There wasn’t any sort of formal training,” Dumbuya said. “Cleaners could go and get the blood. And any person, whether they’re trained, untrained, volunteer, was being allowed to put up blood. Somebody would write down vitals that were blatantly worrying, but because the person writing it didn’t even know what they were writing, they would carry on. The blood transfusion would continue until the woman had an adverse reaction, and all hell would break loose.”

Investments in KGH’s blood bank were inherently urgent, and became even more so as patient levels increased. PIH’s efforts to encourage more of Kono’s population, pregnant women in particular, to seek health care required an improved and expanded blood bank.

“The KGH medical superintendent approached PIH and asked us to fully get involved in supporting the blood bank,” said Musa Bangura, PIH laboratory manager in Sierra Leone. “We replaced the faulty, broken-down fridge. We expanded the blood bank space. Now, it has a phlebotomy room, a testing room, a room for the refrigerators, and a reception area. And then of course we added full support with supply chain,” including items such as blood bags and reagents.

Relocated directly next to the maternity ward and powered by PIH generators ensuring 24-hour electricity to the hospital, the blood bank could help save more lives than ever before.

“We established a lot of standard operating procedures and did a lot of refresher trainings on how to manage a blood bank, ranging from the screening process, to storage, to cross-matching, to the distribution of blood in the wards,” Bangura said. “And we did some crash training on how you can identify and mitigate blood transfusion reactions.”

“Now,” Dumbuya added, “we have a system before you are allowed to do blood transfusions. You have to have gone through the training that Musa and the team organized. We have a better check-off system between nurses and blood bank staff to reduce the incidence of somebody being given the wrong blood. And there are forms that must be completed before transfusion.”

Blood bank staff and clinicians feel newly empowered, Dumbuya said. And, last but not least, they no longer have to ration blood, thanks to an ever-lengthening list of local blood donors and regularly held blood drives.

“We have mobile blood drives two or three times a month throughout Kono District,” Bangura explained. “We normally target 50 donors, and can get 35 units minimum. Then we have static drives—people from our database of donors we call and transport to KGH to donate when we are in need of fresh, emergency blood.”

All told, these system-wide changes enable KGH to have between 50 and 80 units of blood on hand at all times. Whereas before 10 units had to be split amongst the whole hospital each month, Dumbuya said, “now I know we can transfuse 10 units a week just in maternity.

“It’s truly not comparable,” she continued. “It’s going from being able to use one unit of blood per week, to performing three or four transfusions a week—and a transfusion can be up to four units.”

These numbers should only go up. “Because of the impact we’ve created in the district and the donor groups we’ve set up,” Bangura said, “we should try to increase the donor target to 70 [people per blood drive].”

The success of KGH’s blood drives is notable in Sierra Leone, where fear, mistrust, and mythology characterize a common sentiment against blood donation.

In response, blood bank staff begin every mobile blood drive with a community education event. “Every blood drive lasts 48 hours,” Bangura explained. “Once you get there, you call a town hall meeting. You talk to communities. ‘We are PIH. This is the importance of donating your blood. These ae the kinds of lives you are going to save.’

Slowly but surely, a cultural shift is taking place in Kono—one that promotes a new vision of blood donations, and a new trust in health care in general.

In a country like Sierra Leone, though, poverty remains the largest barrier to blood donation, as well as the biggest driver of demand. Dumbuya has witnessed instances in which a patient needed emergency blood, but family members were often not healthy enough to donate, for lack of proper nutrition and overall poor health. Other times, hospital visitors would offer to donate, but only for a price.

Meanwhile, maternity ward staff often see pregnant women so severely anemic—with hemoglobin levels half of what is normal in a healthy adult—that they suffer complications.

“Women come to the hospital in a state of collapse—without enough red blood cells to take oxygen around the body, which eventually affects your lungs and other organs, and with this baby trying to survive,” Dumbuya said. “It’s a lot about nutrition, and that resting is a theoretical concept for someone whose daily meal for their family depends on what she earns that day.”

This reality “still amazes” Dumbuya, even after two years working full-time in Sierra Leone, her country of birth. “I can still stand their gawking and thinking, ‘How did she die?’ I understand the physiological how,” she said. “But it’s how, in this day and age, a woman, a human being, can be allowed to deteriorate so badly.”

“We never gave up on her“

And yet, in the nick of time each day, KGH’s revitalized blood bank saves patients’ lives, particularly those of expectant mothers.

“The most rewarding part is when you see those lives saved,” Bangura said. “The blood bank is functioning, the staff are doing their best, and we’re contributing to reducing maternal death.”

Dumbuya echoed this sentiment, recalling numerous patients she and her team have saved with easy access to safe blood.

“We had a patient, Margaret, who had choriocarcinoma—a cervical cancer,” Dumbuya said. “Today, she’s healthy and happy. The drugs helped, the other care helped, but there were times that Margaret would stand up and lose two, three liters of blood. Had she been in a place—this includes some of Sierra Leone’s other bigger hospitals—where you cannot access a safe blood bank, she would never have survived. Or if it was a few years ago, when there was one fridge with hopefully 10 units.

“She has been the biggest user of the blood bank in the history of KGH,” Dumbuya continued. “Forty-two units over her weeks of treatment. We are in a really privileged position at KGH. In settings without blood banks, the value of one person’s life eventually has to be measured in terms of availability of resources—not using up more than your fair share. But we never gave up on her.”

Now, the KGH team has higher aspirations for their blood bank. “We’re not yet able to separate blood components. This has got to be one of the things we start thinking about, because too much blood is also not good; you can overload the system,” Dumbuya explained. “Sometimes you only need parts of it—platelets, plasma, packed red blood cells.”

This new function would further increase the quality of care at KGH, and allow clinicians to save even more lives. The investments needed are familiar: the supplies and machinery that separates blood, staff training on when and how to do so, and systems to ensure safety.

“We’ve passed that sort of beginner’s level. So now we want to move to the intermediate stage and aim for the advanced stage,” Dumbuya said. “I truly believe we’ll get there some day.”