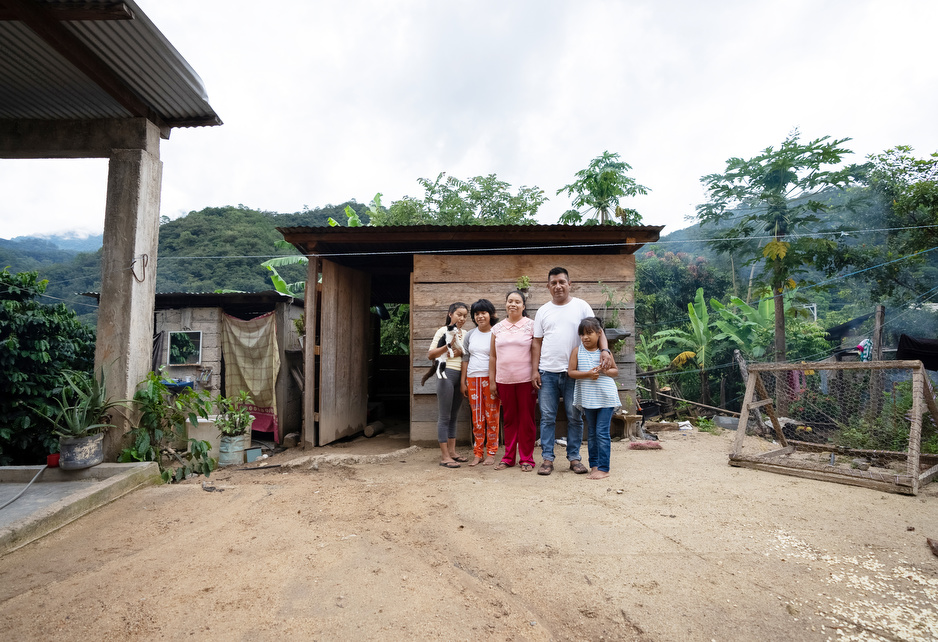 Ángela Velasco had tried everything: Herbal tea. Acetaminophen. Another pill from the medicine cabinet. But her daughter’s fever was only getting worse.

“I didn’t know what to do,” she recalls. “It was about 5 or 6 o’clock in the evening and the girl did not get any better.”

Ariadna had started to vomit. She could no longer walk. And the pain, once confined to the 9-year-old’s stomach, had spread throughout her body.

Then the rain started to fall. During the rainy season in Chiapas, Mexico, rain often meant a torrential downpour, turning the dirt roads of Plan de la Libertad into mud and making any travel on the side of the mountains dangerous.

Velasco rushed her daughter out of the house and, with her husband’s help, put her on a relative’s motorcycle.

Reaching the nearest open clinic—nearly an hour away—felt like a race against the clock. But they had to try.

Plan de la Libertad is one of nine communities in Chiapas, Mexico, where Compañeros En Salud, as Partners In Health is known locally, has worked for more than a decade, providing medical care and social support in partnership with the Mexican Ministry of Health.

Although Mexico provides universal health care, costs like transportation and lodging near advanced hospitals in major cities make accessing that care difficult, especially in Chiapas, where 1 in 3 families lives in poverty. That’s a reality that Compañeros En Salud is working to change.

For many—like Velasco—that fight is personal.

“Getting medical attention should be a right, but unfortunately it is not,” she says.

After rushing her daughter to the health center, Velasco and her husband were sent from clinic to clinic and passed from doctor to doctor—all of them private, out-of-pocket services—leading to a series of tests, consultations, and even a surgery, but ultimately no answers. The diagnosis wouldn’t come until months later, during a follow-up appointment—this time, at a public clinic run by Compañeros En Salud and the Ministry of Health: Ariadna had ovarian cancer.

“It was like a bomb had exploded in my face, without me realizing it,” she says. “The whole situation made me sad.”

Ariadna would need six rounds of chemotherapy—immediately. At some point, maybe a blood transfusion. Maybe platelets.

“The doctors at the time were worried,” says Dr. Alejandro Hernández, Right To Health Care coordinator at Compañeros En Salud. “The family was very worried about Ariadna.”

‘We Didn’t Have One Peso Left’

Doctors were adamant: Every three weeks, Ariadna would have to travel to Tuxtla for chemotherapy at the advanced hospital for specialized care, at least five hours from Plan de la Libertad. After each round, she would have to return to the hospital within three to four days for follow-up testing.

To save time and money, Velsaco decided to stay with her daughter in Tuxtla during the chemotherapy. But the bills were stacking up.

She asked everyone for help in those days—friends, family, even strangers. The savings from the family’s coffee farm and her husband’s seasonal work were running out.

“We didn’t even have one peso left,” she says. “My husband said, ‘Well, at some point we’re going to have to sell, whether it is the coffee plantation, the house or whatever, to be able to support the girl.’”

It wasn’t just the finances weighing on her. The chemotherapy was taking a toll on Ariadna. As she watched her daughter lose her hair, pass out, and struggle to breathe, Velasco didn’t know how much longer she could cope.

“She told me she felt like she was dying,” Velasco recalls. “It was a really distressing moment for me. How do you think straight? How do you respond to a situation like that?”

‘They Never Left Her Side’

But even in her darkest moments, Velasco wasn’t truly alone.

From diagnosis to chemotherapy, Compañeros En Salud was there to support her and Ariadna—and not just medically. A clinician at Compañeros En Salud’s clinic in Plan de la Libertad referred Velasco and her family to the Right to Health Care program.

Since 2013, the Right to Health Care program has helped 1,787 patients in the rural communities where Compañeros En Salud works get referrals to advanced hospitals for specialized care. The program has also connected patients with social support—essential resources such as food, housing, and transportation that are often barriers to health care for patients living in poverty.

Guided by PIH’s value of accompaniment, the Right to Health Care team helped Velasco schedule each of Ariadna’s chemotherapy sessions and arrange for food, transportation, and lodging in Tuxtla, free of charge.

“We started mobilizing all the resources and talking to hospitals to follow up in a third-level hospital with oncology,” says Hernández. “This is how we managed to get them to follow up at the pediatric specialty hospital in Tuxtla.”

Compañeros En Salud helped Velasco navigate a complex health system and communicate with clinicians, even sending a pasante, a first-year clinician completing their year of service with Compañeros En Salud, to attend chemotherapy appointments with her and Ariadna—accompanying them through each step of the process.

“As soon as the medication started, they were there to be with her, to watch her,” Velasco recalls. “They never left her side, not even for a second.”

There were other signs of hope, too.

As the rounds of chemotherapy progressed, Ariadna was starting to respond to the medication. By the fifth round, her side effects had become mild and her body was recovering.

“For me, it was a lot of emotions,” Velasco recalls. “I was standing up. I sat down. I cried with joy.”

The journey wasn’t over. Ariadna’s condition would have to be monitored for five years to make sure the cancer did not return. The family currently sees an oncologist once a month to track her progress, with transportation, lodging, and food supported by Compañeros En Salud.

But Velasco, who has since returned home with Ariadna, is breathing easier.

“The support that Compañeros En Salud has given us has been very valuable,” she says. “I really don’t know what we would have done.”

Although roughly 70% of cancer deaths occur in low- and middle-income countries, they receive only 5% of global cancer resources. See how PIH Canada is working to change this and help patients with cancer and other non-communicable diseases receive the care they need.