As COVID-19 Cases Mount in Peru, Medical and Social Support Are Key 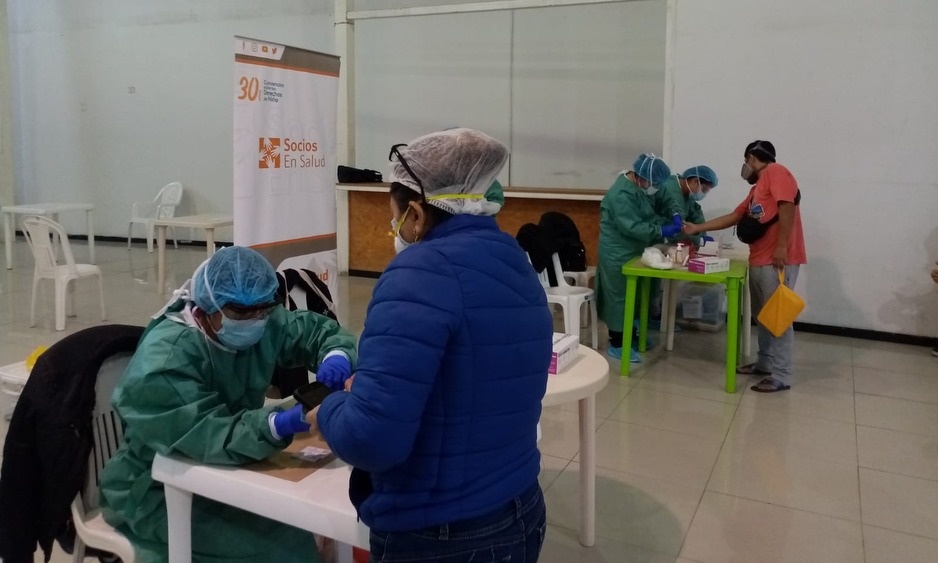 From mobile clinics to chatbots, Partners In Health is bringing technologies old and new to the fight against COVID-19 in Peru – one of the hardest hit countries in South America, despite its early success in curtailing the virus.

Known locally as Socios En Salud, PIH has focused its work in Lima and Carabayllo, a poor neighborhood stretched along the northern hills of the capital. For decades, PIH has strengthened these local health systems in partnership with Peru’s Ministry of Health, focusing on infectious diseases, community health, and mental health.

PIH’s systems strengthening over the years has paved the way for a quick and comprehensive response to COVID-19, even as the country scrambles for resources to stave off a stubborn pandemic and an alarming surge of cases.

Since March, the country has seen more than 288,477 cases and more than 9,860 deaths, according to Reuters. PIH has conducted contact tracing for more than 41,000 people, tested 12,000 people, and donated 30,000 tests to Peru’s Ministry of Health—all of which helped identify North and East Lima as hotspots. PIH has also expanded beyond its typical reach in the North to fight COVID-19 in additional regions of Peru.

Daniela Puma spends her days knocking on doors in some of the most remote neighbourhoods in North and East Lima. As supervisor of PIH’s Rapid Response Team, she leads a group of nurses and community health workers on the frontlines of PIH’s COVID-19 response in Peru. They go door-to-door in communities where COVID-19 cases have been identified and offer free screening and testing. She estimates her team runs about 120 tests per day.

If a person tests positive, the team asks them to quarantine for two weeks and educates them about the disease.

“We try to do education on washing hands, but there are many people who don’t have water in the house,” says Puma. “It’s very difficult to do the work.”

To address this concern, PIH provides families with a hygiene package, including hand sanitizer, bleach, and face masks. Puma’s team also connects patients in quarantine with social support, including money for food. Social support is especially crucial in Carabayllo, a district where extended families often squeeze into small apartments, making isolation nearly impossible. In response, PIH has rented rooms in nearby hotels for individuals who need to isolate and provided more than 366 families with social support since the start of the pandemic.

As cases are confirmed, Puma and her team begin the process of contact tracing. They ask for the name and information of anyone they’ve been in touch with over the past two weeks, and reach out to inform those individuals that they’ve been exposed to the virus. Then they test the patient’s contacts and track the spread of the virus.

The team mainly works in residential neighbourhoods but has also looked for the virus in crowded areas, such as bus depots, food markets, and hostels.

People are often willing to take a test when offered one, Puma says, even when approached on the street. As the pandemic’s toll has mounted, testing – once stigmatized – has become a new normal.

Despite its early successes in curbing the virus, Peru has been one of the hardest hit countries in South America.

Systemic inequalities have fueled the disease’s spread, says Dr. Marco Tovar, medical director of PIH in Peru. The virus is often initially spread by travellers who visit Peru and bring the disease with them. A large part of the PIH team’s initial response was focused on screening passengers arriving at the Jorge Chávez International Airport in Lima. The virus is then transmitted by workers who cannot afford to stay at home and commute to work in the city, especially from Carabayllo.

As the Rapid Response Team tracks cases at the community level, Tovar works to mobilize resources in Peru’s health system and tackle the systemic issues that have made the virus especially deadly for Peru’s most vulnerable communities, supporting hospitals across the country.

In hospitals, the situation is especially harrowing, as long lines form outside of facilities running low on beds and oxygen. PIH is supporting facilities in need by delivering personal protective equipment and oxygen across multiples regions in Peru.

Realizing this gap, Tovar and his team are working hard to find innovative ways to help more people in need of hospitalization. Meanwhile, they are closely watching the virus. Even as Lima has shown signs of improvement in recent weeks, the disease has spread to other regions of the country, creating new hotspots. And plans to reopen Peru’s economy have sparked concern.

“Now the economic activities are beginning again, you now have more people on the streets,” he says. “We are preparing our response in case we have a new wave of the disease.”

In the fight against COVID-19, PIH has drawn from past lessons in fighting infectious diseases in Peru, specifically the multidrug-resistant tuberculosis epidemic of the 1990s. Again, PIH has turned to the old standbys of contact tracing and testing, but also employed technological innovation.

For example, mobile clinics – a staple of PIH’s TB program – have been revamped to respond to COVID-19 as well as tuberculosis, screening for both diseases simultaneously and helping health care workers reach even the most remote neighbourhoods.

And as COVID-19 cases have mounted, PIH and government partners have turned to another innovative approach—a mobile molecular testing lab. Molecular tests are crucial for diagnosing COVID-19 and stopping the spread. Unlike antibody or antigen tests, they detect the virus’s genetic material and have a high level of accuracy. But despite the demand for molecular tests, Peru lacks enough labs to process them.

PIH’s lab in Carabayllo can process 100 tests per day. But with thousands of new cases emerging daily, more capacity is needed. So PIH teamed with Peru’s Ministry of Health to launch a new mobile molecular testing lab, a truck with lab technicians and equipment, that provides a way to scale up testing capacity and provide faster, more accurate results. The lab can process as many as 500 to 600 tests per day, according to Peru’s National Institute of Health.

Innovation in PIH’s COVID-19 response extends to mental health as well, through the creation of a phone app.

For years, PIH’s mental health program has helped patients with conditions ranging from anxiety to schizophrenia through innovative programming and resources. Now, as the death toll from COVID-19 rises, mental health has become even more critical, as Peruvians grapple with the loss of loved ones and the daily realities of a pandemic with virtually no end in sight.

To meet the demand for mental health resources, PIH has created an innovative new tool—the ChatBot App. The chatbot asks a set of mental health screening questions and notifies a team of 95 PIH- and government-employed psychologists about people with mental health conditions so they can follow up with a phone call and additional support. Of the 473 people who responded to the app in May, 76% were in need of mental health support.

The chatbot can communicate in Spanish and Quechua, an indigenous language spoken by around 13 percent of Peruvians. Most Peruvians who lack access to health services – around 60 percent – speak Quechua, according to a 2014 World Bank study.

Tovar hopes that technological innovations like this can help address systemic barriers that have prevented marginalized groups from receiving care.

PIH’s decades of work in Lima and Carabayllo have laid the groundwork for and ensured trust in its COVID-19 response, pointing to the value of strengthening health systems.

“Here, in the north of Lima, we know the leaders of that community,” says Puma. “If you say ‘Socios En Salud,’ people in the community know about Socios. I think it is an advantage that Socios has been here as an institution for many years.”

See how the PIH team is responding to COVID-19 in rural Chiapas, Mexico.

DONATE NOW
Read the detailed report of the four-pronged strategy to save lives in the vulnerable communities we serve, and support global efforts to contain the spread of COVID-19.
Read Strategy
Categories: Featured Stories
Tags: CoronavirusCOVID-19InnovationPeruSocial Support