Nuts for Nouri to fight child malnutrition in Haiti 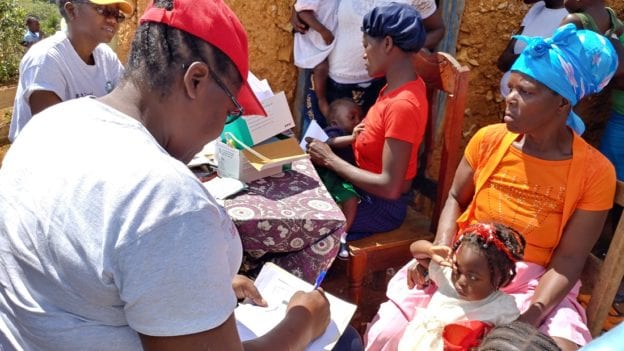 We sometimes say the solution to child malnutrition is easy — it’s food after all, not rocket science — but in practice things aren’t quite that simple.

Malnourished toddlers and young children need food that is nutrient-rich and easy to digest. Because malnutrition requires an extended course of treatment, caregivers need to be engaged in the plan for months at a time. In a place like Haiti, that engagement requires a system that understands the challenges faced by parents often so poor or so busy or so sick themselves that they – and their kids — can’t travel long distances for screenings or check-in appointments.

The lesson is, if we are to properly serve children’s needs rather than blaming their parents for their poverty and rural living, the health care system needs to come to them.

And that’s when the magic happens. Time and again, the experience of Partners In Health has proved that the only way to measure demand for health care is to start providing dignified and accessible services and see who shows up.

In this case, it was way more malnourished children than we imagined.

In 2017, when our Haitian colleagues began rolling out mobile clinics for detection and treatment of under-five malnutrition in the hills near Saint-Marc – just one district among many where PIH works in Haiti — we thought we’d treat 4,000 children under-five over a three-year period. Instead, we treated more than 3,400 in the first 18 months.

The treatment is a ready-to-use therapeutic food called Nourimanba, a high calorie, nutrient-enriched peanut paste, scientifically developed to give kids what they need to recover and thrive. Nourimanba is made in central Haiti at a factory built by Partners In Health that employs more than 40 people and uses peanuts from nearby farmers. Nourimanba is central to all our malnutrition work in Haiti, but due to the successes in case detection and treatment in and around St-Marc, our need far exceeds original estimates.

The heavy demand is proof we’re doing good work. So are the reports we receive from the inpatient pediatric malnutrition ward at the hospital, where we know that fewer children are dying from malnutrition-related causes than they were before this project started.

It’s still not good enough, of course. Every child death tied to malnutrition is an outrage.

That’s why we’ve launched a new campaign, Nuts for Nouri, and asking for your generous support – and the support of your friends and family.

We want to raise enough money to pay for 150 additional malnourished children to receive Nourimanba and a fair shot at a better life. One kilogram of Nourimanba costs about $8. An average treatment course to cure a child is 12kg. So for less than $100, we can put a malnourished child on a path to a healthier future.

As our Haitian colleague and pediatrician Dr. Martine André said last year of the mobile clinic program: “I think it is the best thing we could ever do.”

Let’s do it together.