Cancer Care in Rwanda Goes Beyond Chemo to Heal a Family 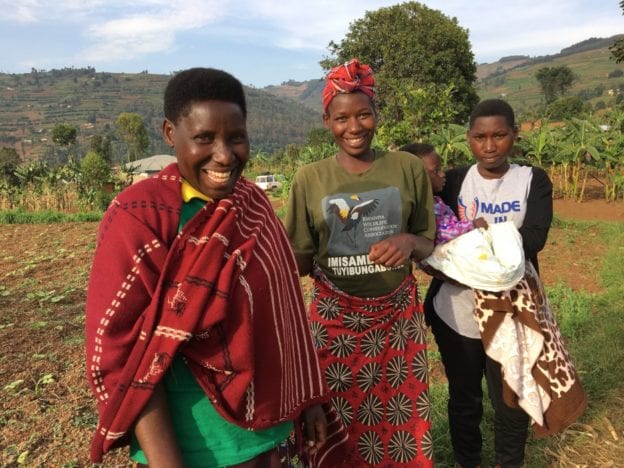 When Françoise Umutesi looks at her 1-year-old grandson, Blessing, she has the smile of someone who once thought she’d never have the chance to meet him.

Umutesi, 45, is a breast cancer survivor. She had a mastectomy in 2012, at Butaro District Hospital in northern Rwanda. She was one of the first patients at the hospital’s Cancer Center of Excellence, which opened that year. The cancer centre now treats nearly 2,000 patients annually, young and old, from across Rwanda and from nearby countries, such as Burundi and the Democratic Republic of Congo, where affordable, quality cancer care is scarce or nonexistent.

Umutesi’s home is much closer to Butaro than most of those patients’. She lives less than an hour’s drive from the hospital, a multi-faceted medical campus that serves nearly 400,000 people in Burera District and is supported by Partners In Health, known in Rwanda as Inshuti Mu Buzima. PIH has supported Umutesi and her family for years, in ways that extend far beyond health care and reflect PIH’s treatment philosophy of including social, mental, and emotional support along with physical.

Albert Ndayisaba, the Burera manager of PIH’s Program on Social and Economic Rights, or POSER, has overseen that support. His team helps about 200 students in Burera District with materials or money for education, and about 800 households with economic development assistance such as small business loans.

Gilbert Rwigema, chief operations officer for PIH in Rwanda, said those numbers apply to each of the three districts, including Burera, where PIH works—meaning PIH helps 600 students with education and 2,400 households with economic development, across the East African country. POSER teams also have provided food packages to several thousand people in Rwanda this year alone, and direct support for health insurance costs to several thousand more.

Umutesi and her daughters are just a few of those recipients. Ndayisaba and his POSER team have helped the family with ongoing money for education, food packages from 2012-16, and transportation costs—because even with their proximity to Butaro District Hospital, travel there is rarely easy.

The dirt roads are steep, winding, and rugged in Butaro, a rural region where the Virunga Mountains and Volcanoes National Park loom large on the horizon. Subsistence farming is a way of life for many residents of Butaro communities. Umutesi is a farmer with land and a small livestock enclosure across the dirt road from their home.

Umutesi has been a Butaro resident for all her life. She was born in the house where she lives, which is owned by her mother, 73-year-old Pauline Nyirabazungu. Nyirabazungu still lives there, too—meaning the birth of Blessing added a fourth generation under their small, shared roof.

It is a house full of mothers and daughters. Umutesi has three girls, now grown women. Blessing, the little man of the house, is the son of Umutesi’s 19-year-old middle daughter, Charitine Umamwiza.

On a sunny afternoon in mid-March, Umutesi sat with two of her daughters at a table in the front room, a warm red blanket around her shoulders. Her eldest, 23-year-old Pierrine Uzatuza, held Blessing on her lap. Charitine, the middle daughter, wasn’t home that day, but Umutesi’s youngest, 16-year-old Anitha Dukundane, also joined the conversation.

Ndayisaba was visiting the family that afternoon for a routine POSER checkup, along with Dr. Akiiki Florence Bitalabeho, head of medical education and training for PIH in Rwanda.

The talk was light, but the topic was heavy. The family shared memories of the time, years ago, when Umutesi was not able to be home, her health was in doubt, and Nyirabazungu had to take care of all of them.

“Life in this house was so difficult,” Pierrine said. “Our grandmother supported us with everything she had.”

In the fall of 2011, Umutesi found a lump in her breast. That November, she had an initial consultation at Butaro District Hospital. Two months later, she stayed at the hospital for a week, and two months after that, in March 2012, she had her single mastectomy. That was followed by a year of chemotherapy, with regular trips to the hospital and exhausting recovery periods that effectively left Umutesi’s mother in charge of the family.

That initial treatment wasn’t fully effective. Francoise needed radiotherapy, which at the time was not available in Rwanda.

While work is underway to provide radiotherapy at Rwanda Military Hospital in the capital, Kigali—itself a drive of more than two hours from Butaro, down out of the mountains—patients needing radiotherapy still, today, must travel outside the country.

In March 2013, Umutesi went to a hospital in Kampala, the capital of neighbouring Uganda. The border is not far from the family’s home, but the trip to Kampala is long. Going by bus can take eight hours. Flights are 45 minutes, but are expensive and first require a long, costly ride to the Kigali airport. Additionally, customs and border crossings are not always certain; as recently as this spring, tensions between Rwandan and Ugandan governments were severely affecting border crossings between the two countries.

Umutesi made the trip by bus—and she made it just once, staying in Kampala for two months to receive radiotherapy.

At that time, Pierrine and Charitine were teenagers in school, and Anitha was just 10. Nyirabazungu, their grandmother, took care of them all. (The responsibility was not new to her. Nyirabazungu had two sons and seven daughters, including Umutesi.)

In the end, the sacrifices and hardships were successful. Umutesi beat cancer and, with regular follow-ups and continued support from PIH, has fully recovered.

Now on the other side of their mother’s illness, the girls have grown into strong women themselves. Pierrine has an associate’s degree in tourism and works for the Rwanda Wildlife Conservation Association. She’s married and lives nearby. Charitine and Anitha are in secondary school, a fact that has not gone unnoticed.

During today’s visit, Bitalabeho—the medical education and training leader—pressed Anitha on plans for her future.

Anitha mentioned that she was focusing on science and hoped to be a doctor one day. Bitalabeho leaned forward and spoke to her intently, describing potential scholarship options, explaining steps she would need to take to reach her goals, and asking questions about her future.

Just across a valley from Butaro District Hospital, where Umutesi received cancer care, is the University of Global Health Equity. The university is a PIH initiative that inaugurated its campus in January, hosts students pursuing master’s degrees in global health delivery, and will accept its first medical school students this summer.

That university, the University of Rwanda, or other institutions could be within reach, Bitalabeho said, if Anitha continued to work hard. Their discussion was friendly and open, but the doctor used the stern tone familiar to parents and educators worldwide, making sure Anitha knew that she would be watching, and that the stakes were high.

“I will be looking for her name at the university level,” Bitalabeho said.

As the visit ended, the family stood in front of their home. Umutesi held Blessing, their newest generation. She reflected on how during her surgery and treatment, there were times when she had no hope. But those times have changed.

“I didn’t know that one day, I would be a grandmother,” she said.

Although roughly 70 percent of cancer deaths occur in low- and middle-income countries, they receive only five percent of global cancer resources. See how PIH Canada is working to change this and help patients with cancer and other non-communicable diseases receive the care they need.