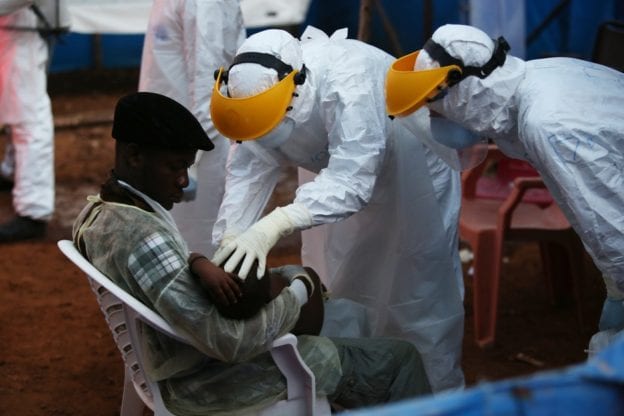 The world’s latest Ebola outbreak now has spread for nearly a year in the Democratic Republic of the Congo, where the virus has infected more than 2,500 people and killed nearly 1,700.

PIH has sent two of our top Ebola clinicians to work with partners in the conflict-torn region to help care for the sick, support response efforts, and share lessons learned during the 2014 to 2016 outbreak in West Africa, where the virus infected more than 28,000 people and killed more than 11,000.

Our efforts to rebuild the public health care systems continue to this day in Sierra Leone and Liberia, where we work alongside each country’s Ministry of Health to support comprehensive primary care.

Dr. Paul Farmer, PIH co-founder and chief strategist, and Dr. Sheila Davis, PIH CEO, were deeply involved in PIH’s contribution to the Ebola response in West Africa five years ago. Following the WHO declaration of the current outbreak as global emergency, Farmer and Davis share their thoughts on the necessity of ensuring that patients receive quality care, along with containment efforts, as the international response continues to develop.

Last week, not long after two of our most Ebola-experienced clinicians returned from the Democratic Republic of the Congo, the World Health Organization declared the country’s Ebola outbreak a “public health emergency of international concern,” or PHEIC.

That brought to mind the last such declaration, made on August 7, 2014. Partners In Health arrived in Sierra Leone and Liberia that fall, to join the global response to what remains the world’s deadliest Ebola outbreak thus far. Over the five years since that time, both of us have played significant roles in PIH’s work in Sierra Leone and Liberia, and learned a great deal from our colleagues in both countries.

We wish to reflect on that ongoing experience, and share some of the lessons we’ve learned, in contemplating the potential significance of this new PHEIC declaration and the dangerous, unstable conditions in the DRC’s North Kivu and Ituri provinces. We seek not only to share lessons, but also to address some of the pressing issues we saw tardily addressed, or not at all, after the last such declaration, in 2014.

In West Africa at that time, the greatest tensions, and much open conflict, stemmed from the unnecessary and wrongheaded elevation of containment over care. Both must be top priorities for responders in DRC, as must the cultivation of trust within communities where there are scant reasons for having much trust beyond the immediate bonds of family and small communities of worship and work.

This opposition of containment and care tracks closely with tensions between public health and clinical duties. In past outbreaks and pandemics, such tension has served us poorly, whether we look at past epidemics of Ebola and Marburg, Zika, or SARS, or reflect on colonial-era epidemics of plague, Spanish flu, or trypanosomiasis. The list goes on. But we both learned this by coming of age as clinicians during the years AIDS came to be the leading infectious cause of death among young Americans.

Prevention and care are meant to be complementary and, indeed, mutually reinforcing tasks: High-quality and respectful clinical care can help build trust, especially when it is offered for all ranking health problems as opposed to just one. An Ebola response that ignores other causes of premature death, whether in childbirth or from trauma, has usually engendered mistrust and loud complaint, as is now the case in the DRC.

A control-over-care paradigm is announced whenever case fatality rates (CFR) are high. In the current DRC outbreak, which has gone on for a year, the CFR is well over 50 percent. It can likely be reduced to lower than 10 percent, given the human and material resources of a modern intensive care unit. However, Ebola outcomes in DRC are also shaped by the following:

• Quality of care (which biosecure emergency care units known as ALIMA cubes and new therapeutics are helping to address) and attention to all medical problems, which are neglected side-by-side with these new Ebola interventions and are key to building trust.

• Widespread resentment, not only to 25 years of armed conflict in the region, but also to more than a century of (neo-) colonial extraction.

• Blaming the continued spread of Ebola on people’s disbelief in the virus, which posits cognitive deficiencies as the root of problem. Rather, we should view mistrust as an inclination, a cognitive tendency, or a structured disposition towards eluding depredation.

• The employment of Ebola survivors, which fosters community engagement and improves the quality of expert mercy.

• Blaming the WHO for an underpowered response, which is illogical when their—and the current epidemic’s—funding needs have been slow to materialize.

A PHEIC declaration may or may not solve any of these things. Where this one leads will depend on political will, expert mercy and the resources to back it, and a much bigger dose of humility and social justice.

PIH works to strengthen health care systems in the countries where we work so that when disasters strike, from disease outbreaks to natural disasters, health systems are able to respond and provide the emergency care communities need. Learn more about PIH’s disaster response to the flooding in Malawi from Cyclone Idai.