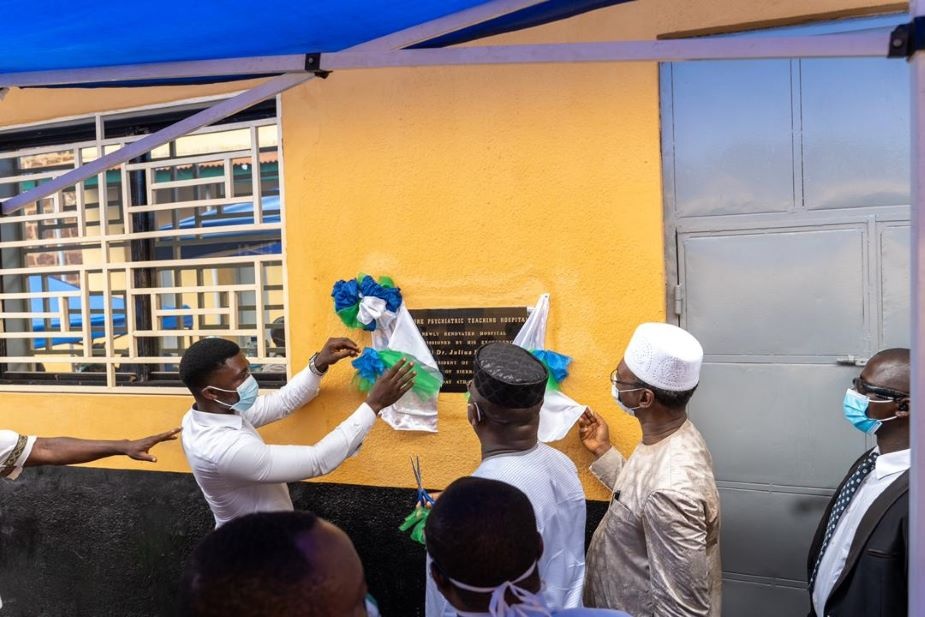 In Freetown, Sierra Leone, June 4 was a day of celebration at Sierra Leone Psychiatric Teaching Hospital (SLPTH), the only dedicated mental health facility in a country of 7 million people and the oldest psychiatric hospital in sub-Saharan Africa. Partners In Health staff, hospital staff and patients, and country leaders—including President Julius Maada Bio and Minister of Health Dr. Alpha Wurie—gathered to recognize and rejoice over the completion of renovations and improvements to the hospital.

Since its opening in 1820, Sierra Leone Psychiatric Teaching Hospital had been without electricity, running water, or an adequate supply of medications. For safety reasons and lack of proper resources, many patients spent days and nights chained to their beds.

Led by PIH’s partnership with the government of Sierra Leone, SLPTH has transformed into a dignified, well-resourced hospital in which to deliver and receive care for severe mental health conditions. PIH’s introduction of plumbing and electricity, establishment of a supply chain for never-before available psychiatric medications, and reconstruction of wards mean that clinicians now deliver care to patients in a clean, comfortable space.

Chains are no longer used, or even necessary.

The ceremony included speeches from President Maada Bio, Sierra Leone Psychiatric Teaching Hospital Medical Superintendent Dr. Abdul Jalloh, and Executive Director of PIH in Sierra Leone Jon Lascher. And while it marked a milestone for mental health care in Sierra Leone, other news weighed heavily, too. With attendees clad in masks, the threat of COVID-19 was an obvious presence. What couldn’t be ignored, either, were the ongoing protests in the United States and around the world over systemic racism and continued police brutality and murder of Black Americans.

Lascher’s remarks covered all three topics, and reflected upon the connection between America’s long history of slavery and anti-Blackness and the resource extraction and deprivation that have helped give way to poor health outcomes in Sierra Leone.

“Our two nations are bound by a history of injustice, the consequences of which are still being felt on both sides of the ocean that separates us,” Lascher said.

A lack of high-quality mental health care is certainly one such consequence—one that PIH and the government have made much progress in counteracting. Below, read Lascher’s full speech:

“His Excellency, Mr. President, Honorable Minister of Health, CMO, Medical Superintendent Dr. Jalloh, Matron, SLPTH staff and patients, staff of PIH, especially the tireless infrastructure team that has helped amplify the beauty and dignity of this sacred ground, members of the community, partners, and media: Thank you.

Thank you, first, for welcoming me to this country. I arrived here in October 2014, and not a day has passed since that time that I have not been a welcomed guest in this country no matter where I travel, and for that I thank all of you, for making Sierra Leone a home for me, and for welcoming Partners In Health into this country.

It has been my great privilege over the last six years to build out PIH’s work here in collaboration with the Ministry of Health and Sanitation. We are facing yet another health crisis in Sierra Leone, and by many measures, Sierra Leone has responded with leadership and resolve that most countries, so many months into this outbreak, wish they had followed.

We are here today to celebrate the rehabilitation of the oldest psychiatric hospital in sub-Saharan Africa. The remarkable transformation you all see here would have been impossible without the hospital leadership and the leadership of the Ministry of Health and Sanitation.

As a white American, I feel it important to also comment on what is happening in my country. And what is happening in the United States cannot be delinked from what happens in Sierra Leone. The shameful history of America’s slave trade is inextricably connected to the story of Sierra Leone. Our two nations are bound by a history of injustice, the consequences of which are still being felt on both sides of the ocean that separates us. Sixteen percent of slaves that were stolen from Africa and forcibly brought to America were from Sierra Leone. Though some argue slavery in America ended long ago, and that it is now time to move on, the systemic racism that persists in the United States is directly related to the very recent history of slavery and Jim Crow segregation.

The shameful history of America’s slave trade is inextricably connected to the story of Sierra Leone. Our two nations are bound by a history of injustice, the consequences of which are still being felt on both sides of the ocean that separates us.

The aftershocks of slavery and colonization are still playing out today. Americans aren’t alone in grieving the senseless murder of George Floyd. Americans are taking to the streets in order to demand justice from those in power in the United States to dismantle the racist systems that allow white police officers to carry out state-sponsored murder without consequence. My only regret in being here with all of you today, is that I can’t be marching in the streets in my home country.

And so we are here now at the Sierra Leone Psychiatric Teaching Hospital. A place where a few years ago, patients were chained to beds. It would be easy as an outside observer to think that Sierra Leoneans were okay with this. But at PIH, we reject simplistic analysis. We know that systemic racism also plagues global health and international aid. The same countries that have benefited from centuries of bounty from Sierra Leone are the ones suggesting what is and what is not possible for the progress in this and other impoverished nations. It is possible to unchain patients if you have support that is directed towards your priorities. Mental disorders dramatically impact people in low- and middle-income countries, where 80 percent of the world’s population live. However, greater than 90 percent of mental health resources are spent in high-income countries.

At PIH, we reject simplistic analysis. We know that systemic racism also plagues global health and international aid. The same countries that have benefited from centuries of bounty from Sierra Leone are the ones suggesting what is and what is not possible for the progress in this and other impoverished nations. It is possible to unchain patients if you have support that is directed towards your priorities.

Patients need doctors and nurses who are trained, medication, electricity, running water, and good infrastructure. And this hospital stands as a pragmatic example of how NGOs can partner effectively with the government and people of Sierra Leone. And PIH will continue to challenge the rich world on what they think is possible for poor people. Here we gather in this new lecture hall where the next generation of mental health professionals will be trained.

Our mission as an organization is to make a preferential option for the poor in health care. That means we prioritize those who are suffering the most. We say that the most marginalized should be first in line to receive the benefits of our society. Those suffering from mental illness are some of the most marginalized people on earth, and so we prioritize them. This mission of a preferential option for the poor shares common cause with those demanding justice across America, as part of the Black Lives Matter movement. Your Excellency, Honorable Minister of Health, Superintendent, thank you for welcoming us into your health system, and thank you for showing the rest of the world what health leadership looks like in the face of unfathomable challenges and scarcity.”

Join author and vlogger John Green as he visits SLPTH in 2019, touring the campus and learning about how mental health care has improved since PIH began supporting the hospital.