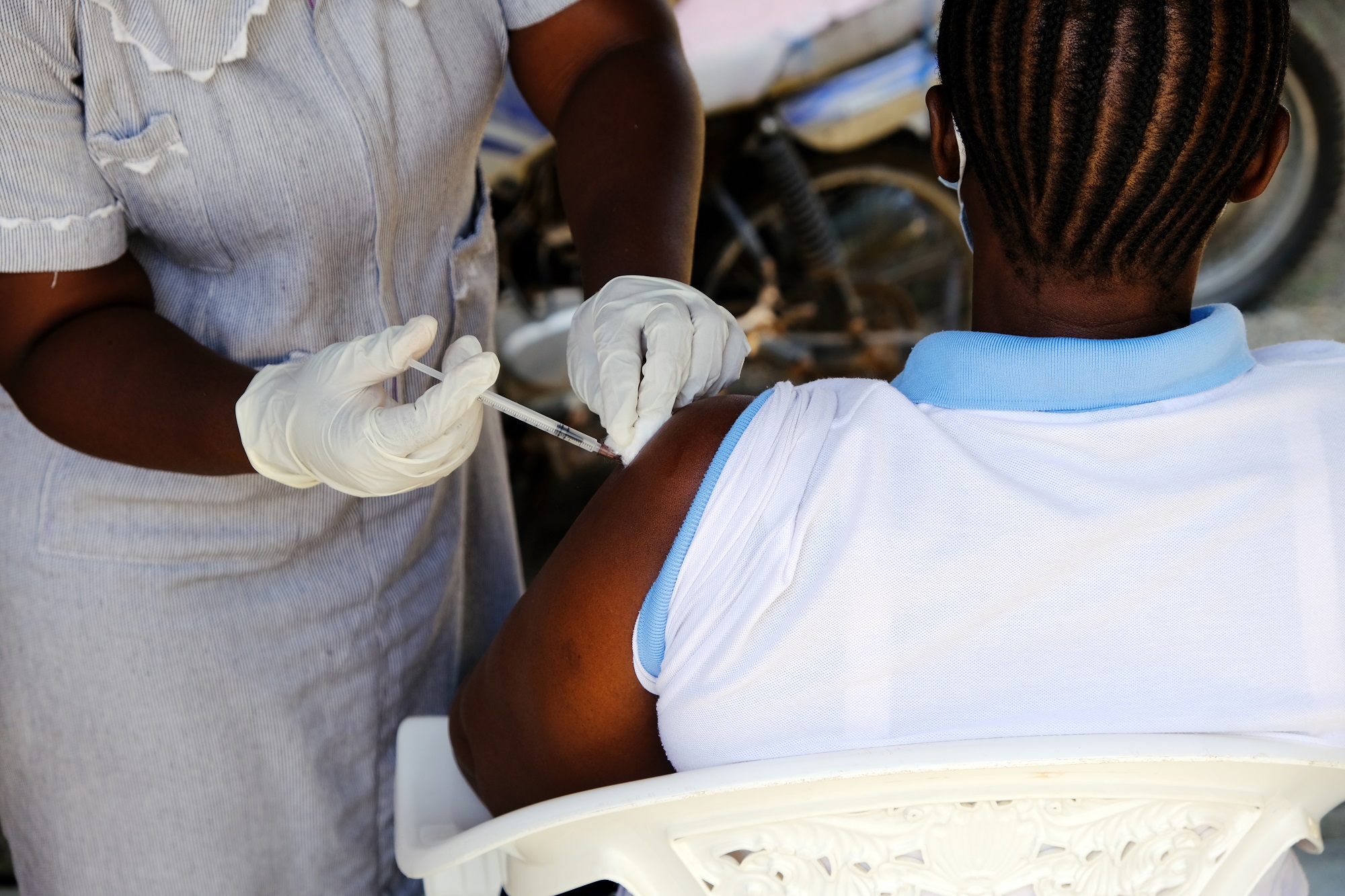 In Sierra Leone’s Kono District, a MOH nurse who works in the female surgical ward at PIH-supported Koidu Government Hospital administered vaccines during a nationwide campaign in March 2021. (Photo by Maya Brownstein for PIH)

A group of 18 Canadian organizations concerned with global vaccine equity and TRIPS waiver negotiations at the World Trade Organization (WTO) have written a joint appeal to Canadian officials after a draft TRIPS waiver compromise agreement became public. The letter below requests that Minister of International Trade Mary Ng and Minister of Innovation, Science and Industry Francois-Philippe Champagne reject this compromise proposal and work collectively with WTO members for a better agreement in support of fair access to COVID-19 vaccines, diagnostics, and therapeutics for all.

The document demands that the Canadian government rejects this proposal in its present form, and work collectively with council members to fix its deficiencies in support of a full TRIPS waiver for global COVID-19 vaccine equity, tests, and treatments.

Re: Compromise proposal on TRIPS waiver

Since October 2020, our organizations — together with the 80+ members of the People’s Vaccine
Alliance — have supported the proposal from South Africa and India to waive WTO-protected and
enforced intellectual property rights on COVID-19 vaccines, treatments, diagnostics and medical
equipment. Individually and collectively, we have written to you on numerous occasions urging
the Canadian government to embrace the temporary removal of intellectual property-related
barriers as part of an urgent, equitable response to the ongoing COVID-19 pandemic —
recognizing that these barriers also stand in the way of the world’s ability to respond collectively
to future pandemics.

We are disappointed that Canada did not support this proposal from the beginning, but we note
your government’s stated aim to work constructively to find a consensus-based solution at the
World Trade Organization that would be acceptable to all member countries. You have surely seen
by now that after 18 months of talks on the waiver proposal, a document has been published
proposing a compromise agreement negotiated by the United States, the European Union, South
Africa and India (the QUAD). These countries do not appear to have agreed yet on the compromise
proposal.

In our view, the document is only a very small step forward. We are concerned by the numerous
flaws that the draft text contains, which could severely limit its impact. We urge the Canadian
government not to accept this proposal in its present form if and when it comes before the WTO
TRIPS Council for a vote, but to work openly and democratically with council members to fix its
deficiencies.

Specifically, we draw your attention to the following flaws in the compromise proposal from the
QUAD countries:

Under WTO-enforced intellectual property rules, a few pharmaceutical companies control the
supplies and prices of lifesaving COVID-19–related products and have sold most vaccines and
treatments to rich countries, making tens of billions in revenue from products developed with
government funding. The waiver compromise, by not including treatments and diagnostics, could
allow similar situations to unfold with respect to life-saving treatments.

In the countries that initiated the TRIPS waiver, the QUAD text is viewed as inadequate by most
civil society groups active in fighting for access to medicines. Canada may come under pressure at
the WTO to support this flawed and insufficient proposal, simply to create the appearance of
consensus and positive momentum at the WTO. We urge you to take a different position and
actively engage WTO members to get it right. We strongly encourage your government to make
the following proposals for improving the waiver proposal from the QUAD countries:

Your government has stated that it would work constructively to find a consensus-based waiver
text that would be acceptable to all member countries. By working collaboratively at the WTO to
urgently remedy these flaws, Canada can help to ensure that vaccines, treatments and other
pandemic-related products are treated as global public goods available to all, as Prime Minister
Justin Trudeau called for in May 2020. The world has waited long enough.

For global solidarity, Canada must support the TRIPS waiver. Removing IP barriers for COVID-19 vaccines, diagnostics, and therapeutics is the right step for human rights and stopping the pandemic.