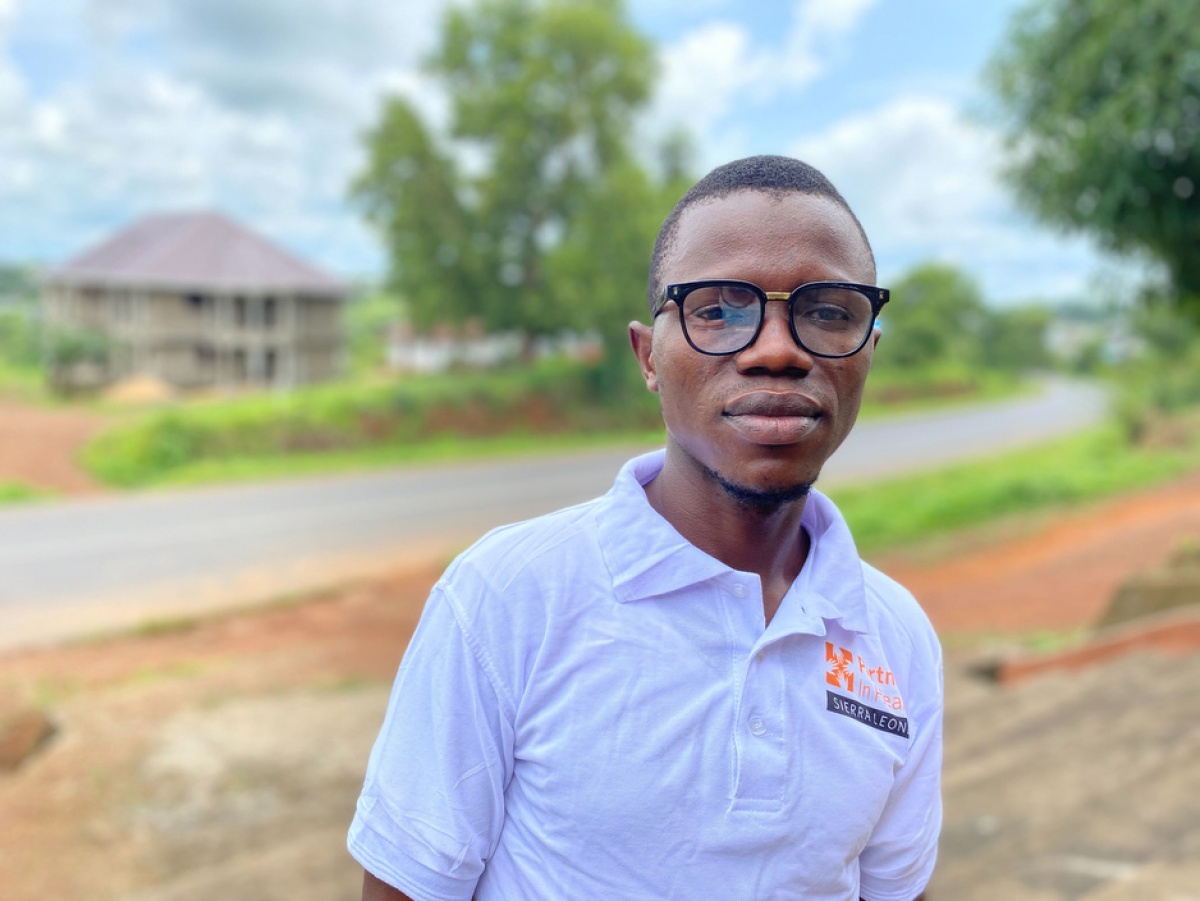 PIH program officer reflects on lessons from Ebola and COVID-19, shares story in support of survivors

Years after the world’s largest outbreak of the virus, between 2014 and 2016, those who beat the odds and emerged from Ebola Treatment Units continue to contend with odds stacked against them, as chronic health side effects, poverty, malnutrition, and mental health challenges like addiction linger.

The COVID-19 pandemic has exacerbated these struggles: Many survivors have experienced PTSD amid another infectious outbreak, and are behind in their medical care, education, and wages as they take every precaution against yet another deadly virus—often without an adequate social safety net.

Bangura knows better than most what the convergence of Ebola and the current pandemic looks and feels like. Not only are he and his team of four Port Loko-based colleagues in their fifth year operating a district-wide social support program, continually learning and responding to the unique needs of community members—many of them Ebola survivors. Bangura has also experienced COVID-era PTSD—as an Ebola survivor himself.

In late 2014, Bangura was at the beginning of his young professional life: he’d completed his secondary education, moved into his own apartment in his home district of Port Loko, and was in his fourth year as a paralegal, with the ambition of eventually attending law school.

Then Ebola arrived in Sierra Leone, with Port Loko among the hardest hit areas. Everyone’s life was uprooted, including Bangura’s. The nonprofit he worked at ceased operations, and he returned home to his “second family”—the family of a classmate with whom he’d lived since he was 11 years old, in order to be closer to school. Amid the outbreak, he took on a new job as a community health worker supervisor.

Ebola—like COVID—is known as a caregivers’ disease, since it disproportionately infects doctors, nurses, and other frontline health workers. In the words of Dr. Marta Lado, who fought the outbreak alongside Partners In Health from 2014 to 2017, “It’s one of those most ungrateful diseases that affects the one who cares more about others.”

Bangura was doing just that: helping educate households about how to protect themselves from infection, and leading people to health facilities when ill.

“That’s where I got myself infected,” he said. “During the course of helping others go for care and understand the outbreak.”

In the weeks that followed, optimism was difficult to hold onto.

“I just felt that…that would be the end of everything,” Bangura continued. His two weeks in the Ebola Treatment Unit is a time he “doesn’t ever want to imagine.”

“Everybody you saw died. Mothers. Children. Important people. It was so sad,” he said. “To see someone surviving was a very rare thing. I lost hope thinking I could make it.”

But after two weeks—the time it took for Ebola to kill most patients—Bangura tested negative for the disease and was discharged with some clothes, food, cash, and a driver to take him back to his second family. On their doorstep, he received a second piece of devastating news.

“They were not at the house at the time I came, but left a message that if I happened to return, I should not be allowed to enter the house,” Bangura said. “I had a feeling in me, that maybe they didn’t think I’m a human being anymore.”

As the Ebola outbreak raged throughout Sierra Leone, survivors of the disease didn’t just have to deal with the trauma of life-threatening illness or losing their homes and possessions to infection prevention and control measures. (When a person was confirmed infected with Ebola, health officials would cordon off their homes and burn their belongings, sometimes along with the house itself, as part of attempts to curb the disease’s spread.)

They also had to deal with social stigma—severe fear within communities, and sometimes even between friends and within families, that survivors may carry the virus. Not to mention blame and shame.

“Nobody wanted to come close to [survivors]; communities rejected them,” Sherry said. “There were a lot of blame games: ‘You brought Ebola into our village, you survived while others died, you caused the death of our relatives.’”

Many survivors internalized this stigma and many relocated, leaving behind the homes they’d forever known but that were now painfully unwelcoming, whether because of community hostility, lingering memories, or both. Women, he notes, were hit hardest, as caregivers who either suffered the brunt of blame for spreading Ebola, or were crushed under the weight of all those they’d cared for and lost.

When Bangura returned to Masiaka, the town where he was living before the outbreak, no one knew about his status as an Ebola survivor; though his chosen family had rejected him, he had the opportunity to resettle into the community where he’d for years served his friends and neighbors. He could blend back in.

He did the opposite.

“I had to speak,” he said. “I had to let people understand my status and why I got infected.”

Bangura wasn’t considering only himself in this decision. He also thought of all those less privileged than him, and how he could use his statuses—as an educated, respected community member, and now as an Ebola survivor—to become a better advocate for them.

“If I kept myself isolated,” he continued, “I would have deprived other people of getting the service they need from me. Maybe my case is better because I can read and write, and honestly, I had been someone the community respected. As a paralegal, people brought their problems to me. So what about a poor, innocent woman who cannot speak for herself, who cannot do anything, maybe she’s the only person left and she’s back to her community. How can she respond to [stigma]?”

Bangura’s solution was to found his own organization, with the purpose of collecting survivors’ stories to see what they needed in the aftermath of Ebola. With some savings, plus the money he’d been given upon discharge from the Ebola Treatment Unit—money meant to help him rebuild his life—he began Rescue Team.

Rescue Team soon gained the attention of Partners In Health, which had begun working in the country in October 2014, during the height of the Ebola outbreak. The two joined forces, with Bangura leading a program in which every teenager and adult discharged from Ebola Treatment Units had a job offer from PIH to work as an Ebola social mobilizer.

PIH’s social mobilization team worked to ensure that survivors in even the most remote communities could continue to access the health care and social support they needed. And, importantly, they worked to find out what else survivors needed.

“There is still trauma in the survivor community—I sense it more highly during coronavirus, because it gives flashbacks, reminds them of their past,” Bangura explains. “Even myself. And it affects their livelihoods.”

Through the COVID-19 pandemic, Bangura has himself provided material support to his survivor community, and counseled and accompanied them through a shared worry that, with this outbreak, they might not again get so lucky.

“That’s why I’m still pushing on,” he continued. “I do believe we have an impact and change people’s lives. And as a program, we have to think big for the future. You can never understand people if you don’t come close to them. If you want to be great, you have to let others be great. If you want to be a leader, you have to let others be leaders.”

See how the PIH-supported COVID-19 observation center in Liberia is ensuring safety and reducing stigma.