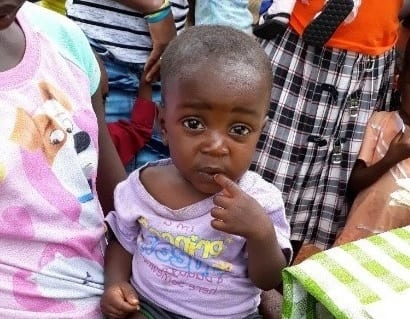 When he first arrived in January 2018 at the mobile malnutrition clinic in Goyavier, near Saint-Marc, Marcellus Adnelson was 12 months old but weighed only 4.9 kg (10 lbs, 13 oz.). He was exceptionally thin, with sunken eyes, rust-coloured hair and an alarmingly small upper arm circumference. The nursing staff who saw him reported that he looked like a “little old man”.

Marcellus is the youngest of six siblings. His single mother supported the family through agriculture and informal small business, but was struggling with crop losses due to drought and flooding. Marcellus’s sister brought him to the mobile clinic worried about his cough, weight loss and appetite, and the nursing staff quickly diagnosed him with severe malnutrition.

Children like Marcellus would typically be referred to the health centre in Saint-Marc for weekly visits, but the facility is 1.5-hours from Marcellus’s home. The $5 transportation costs were prohibitive for his family, and his mother could not afford to take time away from her other children and her work. The mobile clinic was much more accessible to his family. It probably saved his life.

Over the next eight weeks, Marcellus was treated with the ready-to-use therapeutic food product, Nourimanba, produced locally by Zanmi Lasante (PIH Haiti). He received antibiotics, multivitamins, iron supplements, and a deworming agent. Nurses closely monitored his progress and watched his health improve dramatically; by his eighth week of treatment, he had reached 6.8 kg (15 lbs) with an upper arm circumference of 102 mm. The nurses downgraded his status to moderate acute malnourishment and continued his treatment with Nourimanba. A complete pediatric evaluation in Saint-Marc confirmed Marcellus showed no signs of complications, and a pediatrician recommended that his treatment and follow-up be continued in the community.

Marcellus is just one of 1419 children who have been treated to date through mobile malnutrition clinics operated by ZL and funded by PIH Canada with support from the Canadian Foodgrains Bank (CFGB) and Presbyterian World Service and Development (PWS&D). These mobile clinics are enabling ZL staff to reach almost twice as many malnourished children as previously, and to significantly increase rates of treatment adherence and cure. This work is already helping to reduce the number of children falling seriously ill and dying as a result of malnutrition; during the 6-month period of April-September 2017, before mobile clinics were introduced, 13 children died of malnutrition at the central Saint-Marc hospital. For the same period in 2018, there were only four such deaths.

Today, Marcellus’s severe malnutrition has been reversed. He is one of 689 children who have completed treatment through the mobile clinics, and is on course to grow up healthy and strong.