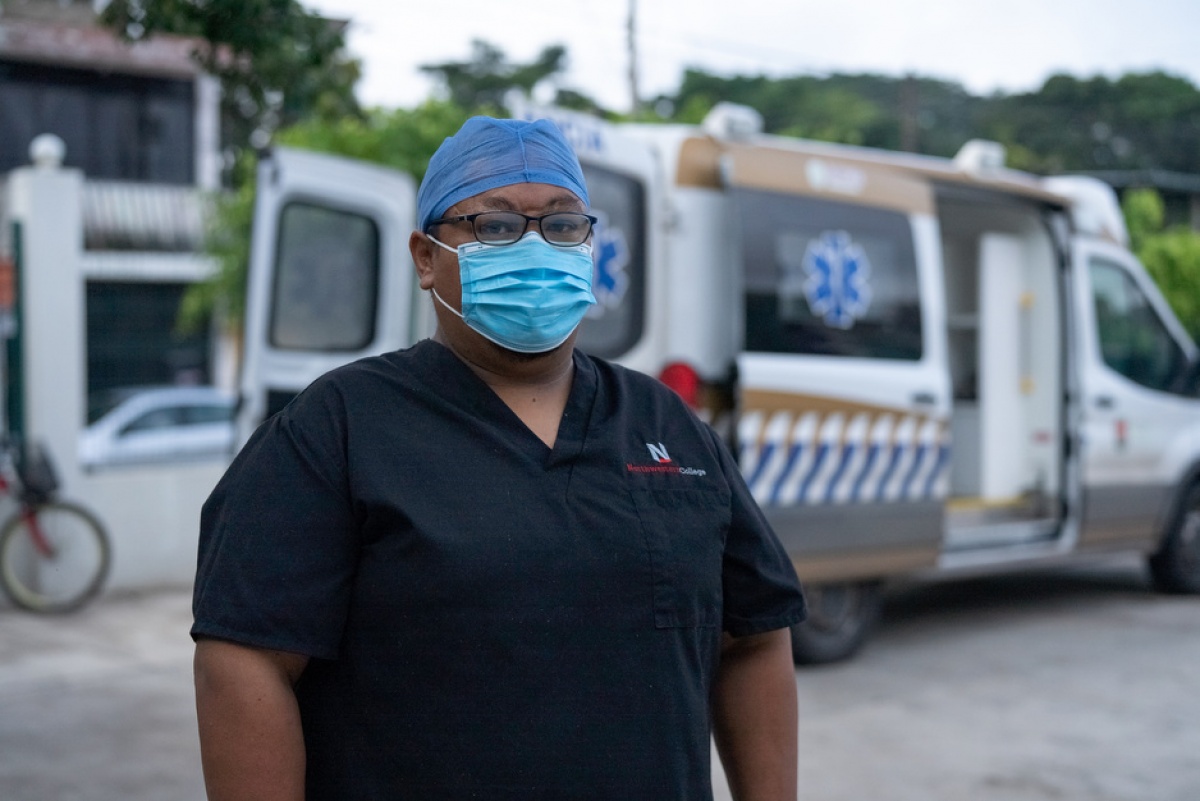 Just months ago, COVID-19 cases were down in Chiapas, and the majority of patients were those considered highest-risk, such as the elderly. But now, as the third wave of the pandemic sweeps across Mexico and its mountainous southern state, cases are on the rise—and the patients filling beds in Jaltenango’s COVID-19 unit are younger.

The hospital’s youngest patient on oxygen was 6 years old.

“The incidence of contagion at this moment is very high,” says Miguel Ramírez, a paramedic with Compañeros En Salud, as Partners In Health is known in Mexico.

It’s a trend that Ramírez sees firsthand in the ambulance, as he cares for COVID-19 patients on oxygen. Even as his patients struggle to breathe, he knows ICU beds and ventilators are limited at their destination—the nearest advanced hospital in the region, which is at least two hours away and one of only a few hospitals in the state with an intensive care unit.

But Ramírez and his colleagues keep on driving.

It’s a desperation that many clinicians at Compañeros En Salud have felt in recent weeks, as they race to respond to a troubling new wave of the pandemic. Unlike the COVID-19 surge last winter, which most affected the elderly and chronically ill, the third wave has infected hundreds of young adults and children—those least likely to be vaccinated in Mexico, due to the national vaccine rollout that prioritized patients based on age.

“The [pandemic] response has been much faster and more effective [recently] in the sense that we have more trained personnel and we have more information about the virus in general,” says Dr. Ana Laura Rodríguez, coordinator of Compañeros En Salud’s COVID-19 response. “But the numbers have been quite alarming.”

The pandemic isn’t the first challenge Compañeros En Salud has faced in Chiapas.

Compañeros En Salud has worked in Mexico’s southernmost state since 2011, partnering with the Ministry of Health to provide health services, strengthen hospitals and clinics, and train clinicians and community health workers. This decade of collaboration made Compañeros En Salud a trusted partner in the Ministry of Health’s COVID-19 response from the early days of the pandemic.

As the pandemic struck Jaltenango and the nine rural communities where Compañeros En Salud works, clinicians and support staff sprang into action, implementing new safety protocols at hospitals and clinics, adapting routine health services, securing essential resources such as masks and sanitizer, and training staff to respond to a fast-moving virus. After a surge in the winter, as people traveled for the holidays and testing capacity improved, case counts more or less stabilized, staying in the double digits for several months.

Then, beds began filling up.

“In July, we started to see an increase in outpatient visits,” says Rodríguez. “We went from seeing an average of 50 patients per month during the low months to 250 consultations in that same month.”

Since late July, Chiapas has recorded hundreds of new cases each day. The COVID-19 unit of the PIH-supported hospital in Jaltenango, a seven-bed facility for patients needing oxygen, has been at 80-100% capacity for weeks.

“I think the hardest thing is that we had a little hope that this was [over] already,” says Dr. Valeria Macías, executive director of Compañeros En Salud. “Then we realized that it seems like it’s just the beginning of many more things. We know that probably right now it’s because of the Delta variant and that there are other variants out there.”

Even as new variants spread, lifesaving resources—from oxygen to ambulances—remain few and far between.

Although oxygen concentrators are available in Jaltenango, these devices require electricity in order to run—a resource that is unreliable in Chiapas, especially during the rainy season from May to November. Oxygen tanks—used only in the most desperate of emergencies—are even more scarce; a standard tank lasts about 10 hours and to refill it, Compañeros En Salud staff must drive to Tuxtla, three hours away.

And patients who need intubation, a level of life support not available in Jaltenango, must be transported to advanced hospitals hours away—in the city’s one and only ambulance.

It’s a desperate drive that Ramírez—the only paramedic in Jaltenango—has made many times. Recently, in a single day, he transferred three patients to the nearest advanced hospital, amounting to a shift of 15-16 hours.

At least twice, he’s had to pull over and, with the help of nursing staff, care for the patient in the back of the ambulance. And once, when no driver was available, he had to drive the ambulance himself.

COVID-19 patients aren’t the only ones in need of emergency care, forcing clinical staff to make impossible decisions about who to put in the ambulance or who the advanced hospital is most likely to admit. More than once, women in labor have been denied admission to advanced hospitals.

“It’s hard times,” says Macías. “We have nowhere to send these patients. Every advanced hospital is at their fullest capacity.”

A Call For Solidarity

In Jaltenango, too, some patients have had nowhere to go. When the hospital’s COVID-19 unit was at capacity, patients requiring very low flows of oxygen were discharged with portable concentrators. There were simply not enough beds.

Lately, Rodríguez has seen more young adults and children in the hospital with COVID-19, including a 6-year-old who was hospitalized for three days. Most of the time, patients recover and return home to their families. But some don’t make it.

“It is painful to accompany the death of a large number of people,” says Rodríguez. “It happens constantly as a doctor. You are used to accompanying death.”

It’s more than just resources complicating the pandemic response. It’s also the misinformation that has circulated in rural communities. The vaccine hesitancy. The public’s fatigue with mask-wearing and social distancing. The burnout and attrition of staff.

Everywhere Rodríguez looks, there is another fire to put out. But she isn’t giving up.

“The most important message that I would like to share is that of solidarity,” she says. “It is difficult to give up some of the things that we are used to before [the pandemic]. But the behavior of this disease is not going to change until we are all vaccinated.”

Third Wave of COVID-19 Impacts Countries Around the Globe