‘Everyone in Freetown Knows Cholera’: Door-to-Door With Vaccine Teams in Sierra Leone 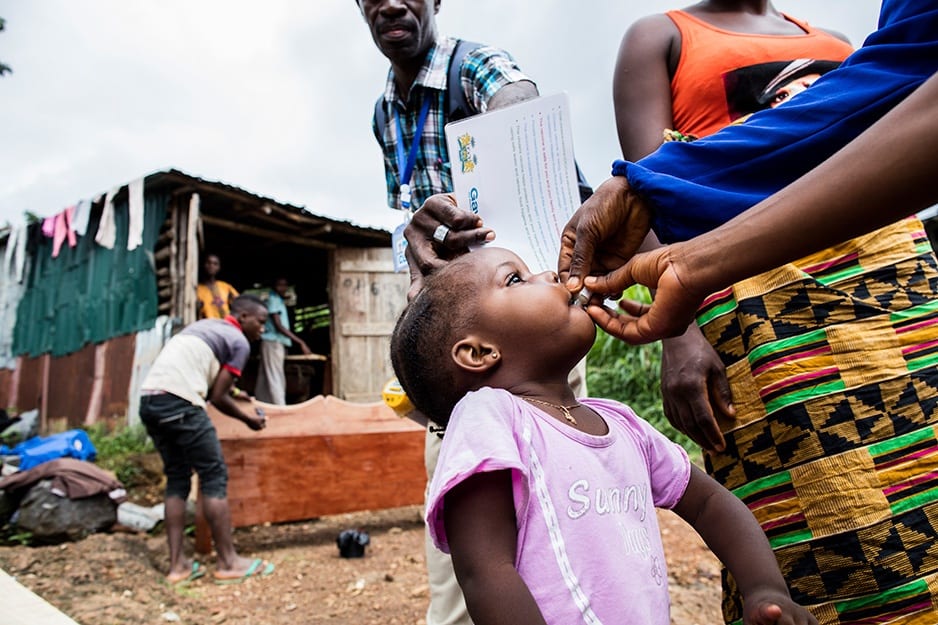 The teams wound down dirt paths, high-stepped through muddy slums, and climbed stairs cemented into lush hillsides. Never mind the lack of road signs and house numbers—they knew where they were going. They lived nearby.

“How di body?” one would ask a neighbor.

“Body fine,” the person would reply.

A team member in rubber gloves then would reach into a soft-sided cooler, tear the top off a tiny vial of milky solution, and let the person shoot it like a liqueur. Another would make notes in a log book. The third would hand over a paper record. And the fourth would mark the lintel of the front door: “OCVR217,” meaning Oral Cholera Vaccine Round 2, 2017. The large chalk letters felt portentous. Evil, in the form of cholera, should now pass over this house.

“A de go!” or “Bye!” team members would say and walk on to the next home. And the next. 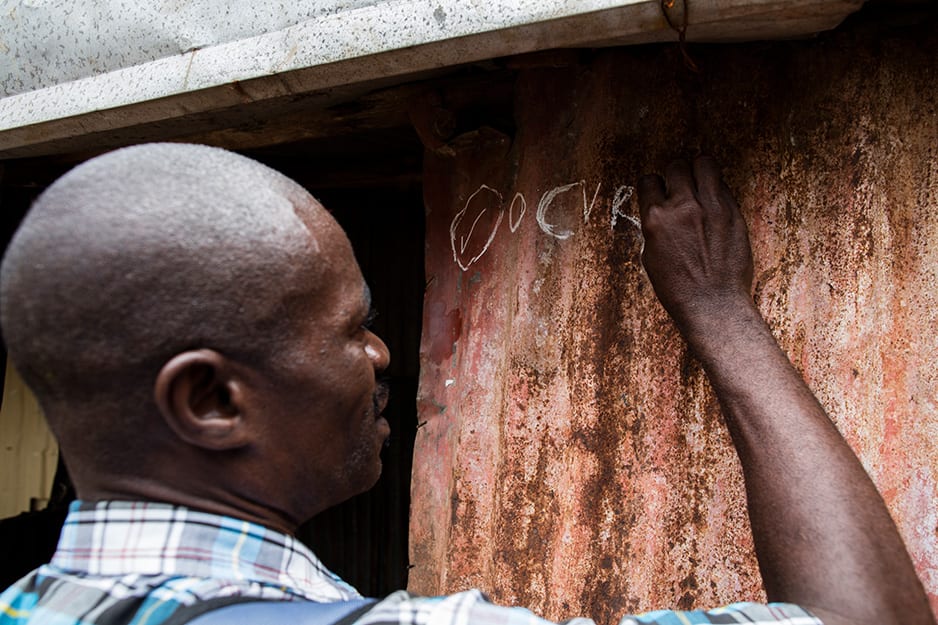 A vaccination team member marks a home in Freetown to show that the family completed the first of two doses.

Such was the scene in Freetown, Sierra Leone, in early October, when roughly 2,000 teams, 8,000 people total, fanned out to complete the largest cholera vaccination campaign since a vaccine was invented in 1885. Consultants are assembling a final report, but preliminary national data suggest strong results. Thanks in part to Partners In Health’s support, as many as 90 percent of half a million people took both doses, thus protecting themselves against the “kaka vomits,” as cholera is sometimes referred to locally.

“This was a huge success,” says Dr. Dennis Marke, program manager at the Ministry of Health and Sanitation’s Expanded Program for Immunization.

Seen alongside similar campaigns—recently carried out by UNICEF in Bangladesh, and Doctors Without Borders in Zambia—the record-setting goal of distributing 1,036,300 vials of the vaccine in Freetown not only saved thousands from severe, life-threatening diarrhea and dehydration. It also testified to the dramatic strides made by Sierra Leone’s Ministry of Health and PIH in fighting a disease that still threatens some 2 billion people worldwide.

The need for a vaccination campaign in Freetown was clear. Seen from afar, the capital is one of the most beautiful in Africa. Green mountains decline into a colorful downtown, which pushes up against white-sand beaches. But up close, the city, population 1 million, is a mess. A five-story high mountain of trash marks the center of downtown.

Superlatives tend to ring especially hollow in the summer. During August’s heavy rains, landslides broke loose up high and buried houses, primarily in the Regent and Juba neighborhoods. Down low, runoff swept through Congo Cross, Kroo Bay, and other decades-old shantytowns near White Man’s Bay. Health clinics were inundated with water up to the knees. Bridges collapsed. Houses, such as they were, washed away, wooden planks and scraps of metal flushed into the sea.

“Within an hour, it was a flood,” said Serla Matukomaron, who was asleep on the floor of her shack by the ocean at the time. “Everyone was shouting, everyone was busy.” 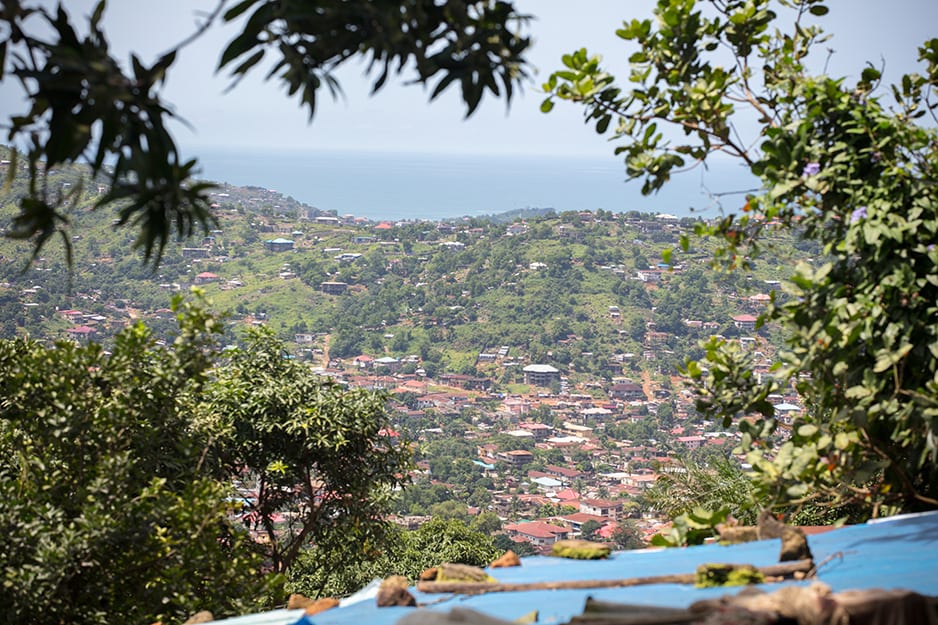 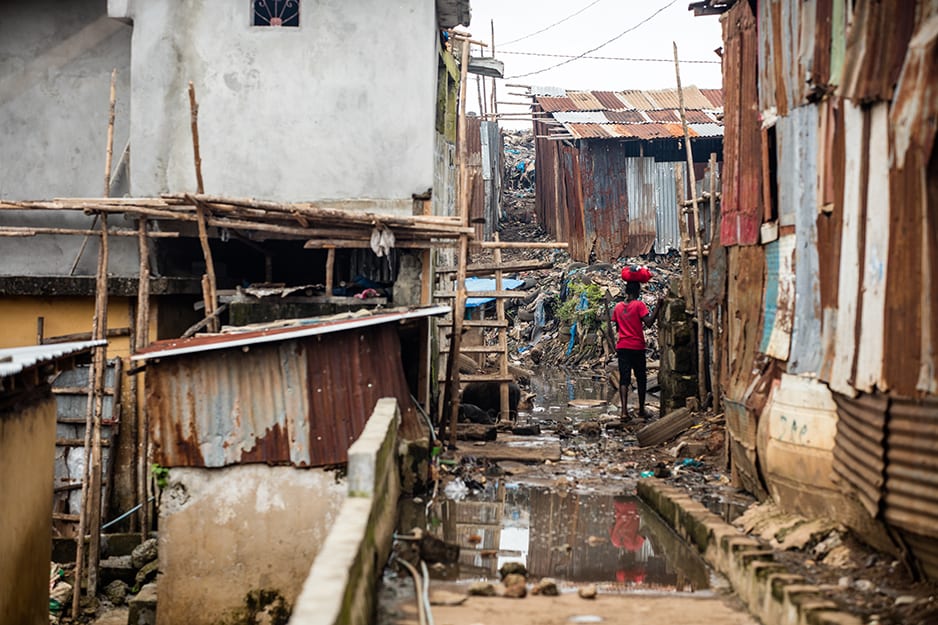 Top: A view of the capital from up high. Bottom: A shantytown on the edge of the dump at the center of the city.

“A handicapped man couldn’t walk,” recalled her neighbor, “so someone came and carried him.”

Matukomaron, a fisherman’s daughter and mother of two, felt the rising water while she slept on the elevated floor of her shack. She awoke at 3 a.m. and gathered her children.

“The water came higher than their heads,” she said. She got her children to safety by floating them through the slum’s dark, labyrinthine alleyways in a plastic washing tub.

When the rains finally abated in late August, the damage was clearly more than other rainy seasons. Reuters declared the deluge one of the deadliest recent natural disasters on the continent. The landslides and flooding displaced an estimated 6,000, killed 1,141 (including family members of PIH staff), and left the capital—never the most sanitary city—with pools of water contaminated by toppled outhouses, broken pipes, and blankets of trash.

Marke kept his eyes on the horizon. While the military tried to figure out what to do with bodies after morgues ran out of space, he pulled together a small group of nonprofits and began formulating a plan. PIH-Sierra Leone Executive Director Jon Lascher, who helped pioneer the launching of cholera vaccination campaigns during emergencies, met with Dr. Marke each morning for a week.

PIH Deputy Policy and Partnership Director Dr. Bailor Barrie chose to defer beginning a PhD program in the U.S. to help Dr. Marke, whom he first met as a medical intern in 2003.

“We all agreed that cholera was next,” says Barrie.

Just beginning to formulate a plan was progress. Five years earlier, Marke might have simply thrown up his hands. Few residents of Freetown were likely to buy the vaccine for themselves. The vaccine’s $3 price is a week’s rent for roughly half the population. And his immunization department would have been largely powerless to get its hands on a significant amount. As recently as 2012, the World Health Organization considered a cholera vaccine too expensive to recommend.

But this wasn’t five years ago. Two big steps had been taken since. 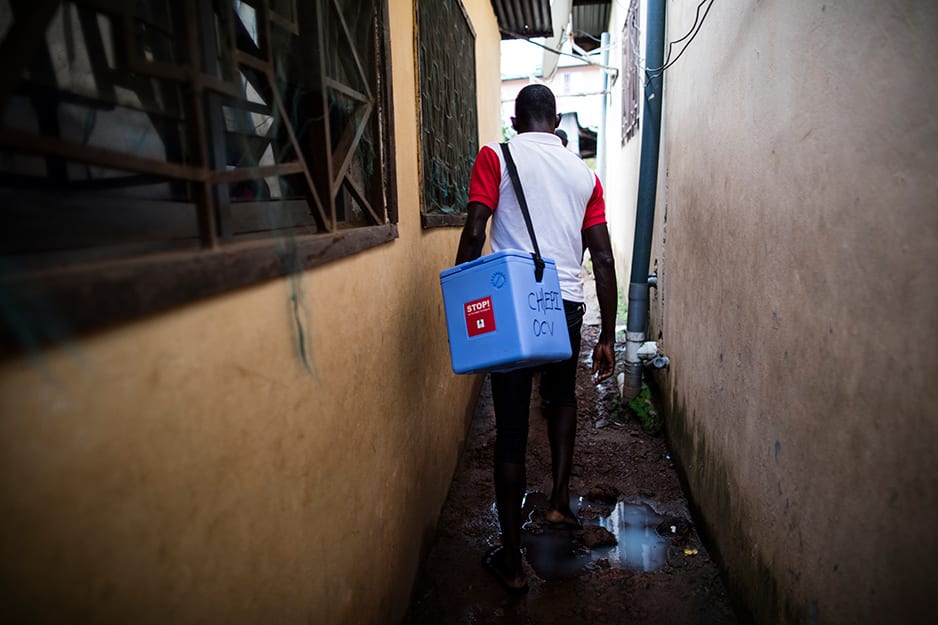 A vaccination team member shoulders a cooler of the temperature-sensitive medicine.

First, PIH had helped make sure cholera vaccine was available to the world. In Haiti in 2012, PIH and the Haitian Ministry of Health refused to accept that poor people didn’t deserve a $3 vaccine, and had bought and delivered their own cholera vaccines. The program, run by two PIH physicians and Lascher, proved an overwhelming success. Ninety percent of patients received both doses. The World Health Organization promptly changed its position and stockpiled the vaccine.

Second, Marke now had the infrastructure to deliver the vaccine. With limited resources, he had built a thorough, albeit fragile, web of refrigeration throughout the country over the last few years. At the government’s central warehouse one day in October, a logistician opened the latch on a thick door, pushed aside a clear plastic curtain, and showed off the network’s centerpiece: a cavernous new walk-in refrigerator nicknamed France, for its country of origin. It could keep a full battery of vaccines between 2 and 8 degrees Celsius, whether stored on the bottom shelf near the door or near the cooling fan in the back, and whether the national power grid suffered one of its daily outages or not. From France, virtually any drugs could travel to solar-powered refrigerators, double-insulated coolers, and more throughout Sierra Leone—without spoiling. 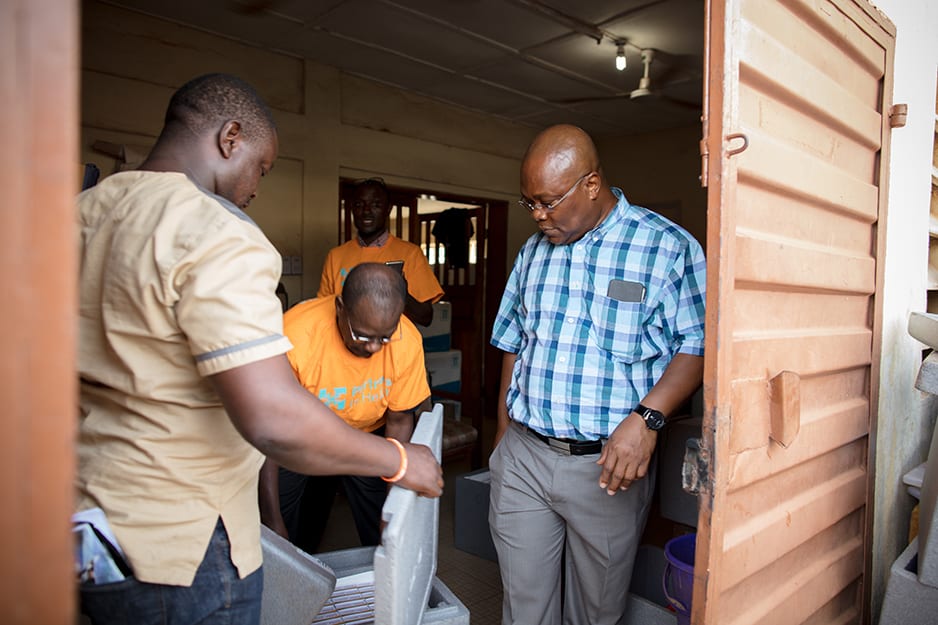 The Ministry of Health and Sanitation’s Dr. Dennis Marke, right, an immunization expert, inspects an early shipment of the vaccine.

All of which is to say, when cholera became a clear threat, and Marke asked about ordering the vaccine in late August, representatives in Geneva replied with hearty encouragement.

All they had to do was hand out the vaccines.

Marke, Barrie, Lascher, representatives from the World Health Organization, and other colleagues divided the city into areas, evaluated which were most threatened by cholera, and alerted staff at those 19 local health centers that drugs were on their way. Each health center would use its vehicle to pick up the medicine at the central warehouse. (Marke’s team can afford only one vehicle.) Then health care workers, trained on how best to distribute the vaccine, would walk the drugs to homes and schools. Along with sharing what they knew about delivering temperature-sensitive cholera vaccines to poor people in the tropics, Lascher and Barrie offered to loan out two dozen PIH case managers, one manager to ensure that the drugs were accounted for and in good condition at each facility in the city.

On Sept. 7, the first 518,150 vials of cholera vaccine arrived from Korea. The vials were packed in lipstick-sized boxes that were inside larger, cardboard boxes; surrounded by cold packs; nested inside Styrofoam boxes; and stacked inside bigger boxes.

The central warehouse soon looked like a cardboard explosion. Incinerators and refrigerators were double-checked. The drugs were distributed to the respective health centers, only to be shuffled again later, when population census info proved inaccurate. And a week later, on Sept. 15, 2,000 teams of health care workers fanned out into the city to administer the first dose.

“Seeing Dr. Marke pull all this together in a short time makes me really admire him,” said Barrie. “Even though it was a new vaccine, the acceptance rate was very high.”

Indeed. Three weeks later, a small team approached elderly sisters who did not necessarily look like they wanted to drink a mysterious liquid offered by 20-somethings in matching white vests. 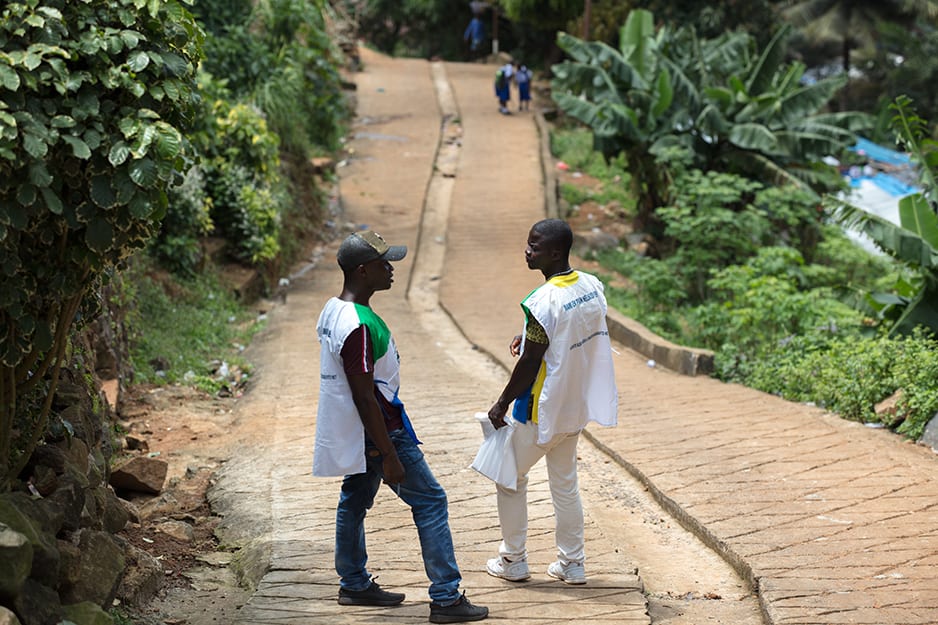 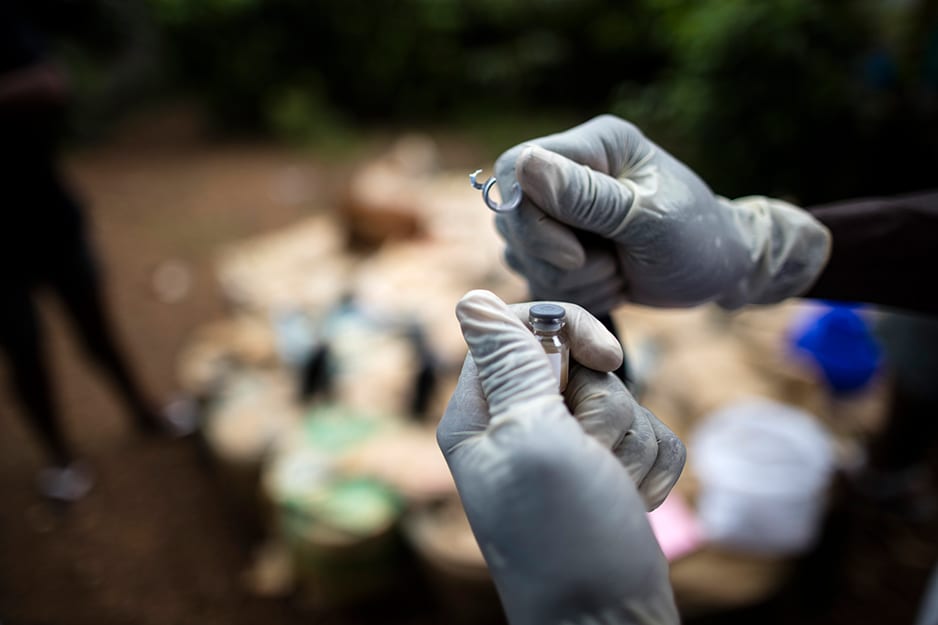 Top: Two vaccination team members take a break after a long morning. Bottom: A team member opens one of the 1,036,300 vials of the medicine that were distributed.

The sisters sat on their patio, finishing each other’s thoughts while staring out at the bog water that had overflowed into their neighborhood weeks earlier and, as in other areas of the city, refused to drain away.

“Ten years ago, this place was bushy,” said Princess Hawa Goba, nodding toward a submerged field.

“Now the house is like an island,” said Phebean Brown-Coker.

Others had it worse, they knew. In Lumbley, dogs were rumored to be digging up body parts.

“Some people have nowhere to go,” lamented Hawa Goba.

The team stopped to chat. Had the sisters been offered two doses, they wanted to know?

Had they been warned of the possible side effects, like abdominal discomfort?

Had they chosen to take it?

Brown-Coker and Hawa Goba looked at each other in bafflement, turned their heads toward the pair, and expressed their astonishment in unison.

Brown-Coker put a finer point on her answer. “It’s a vaccine,” she said.

“I vomited after the first dose, I don’t want to take a second,” said a mother, while supervising her teenage son’s bagging of charcoal, which he would sell on the street.

Her doctor had purportedly advised as much, but she couldn’t remember his name. Or when she visited. Or what his rationale was. In any case, she wasn’t going to take it. “I going to sleep,” she said, rising and heading inside.

But like the sisters, the overwhelming majority were more than happy to take it.

Isha Sankoh, a 60-year-old vendor and grandmother, certainly does. After her first husband was killed in Sierra Leone’s civil war and her second husband turned out to be “too mean,” she moved with her five children to low-lying Kroo Bay, in hopes of growing her business selling charcoal, palm oil, and soda pop. 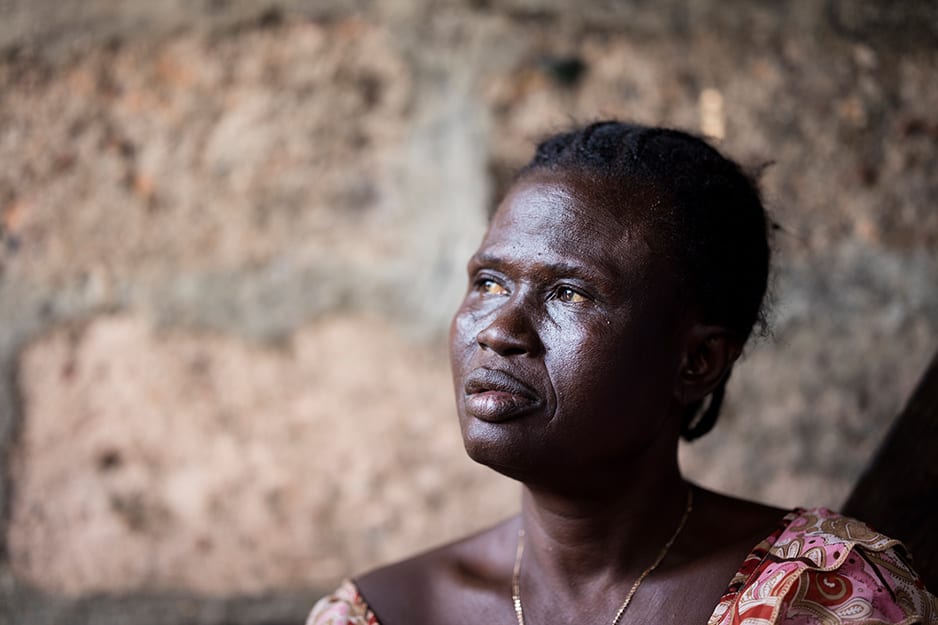 Freetown resident and cholera-survivor Isha Sankoh at home in October.

“Every year, I would lose property during the flood, leave and live with neighbors, then go back,” she said.

During the rainy season five years ago, she fell horribly ill and quickly became too weak to walk. Friends carried her to the health center in the slum, and watched over her kids and grandkids while she recuperated.

“I had cholera almost to the death,” she said.

After being discharged, she moved her family to this one-room shack on higher ground. “I plan to change my life,” she said. “I plan to move from here to a better house.”

Had she taken the vaccine?

Of course, she said.

So the team continued on.