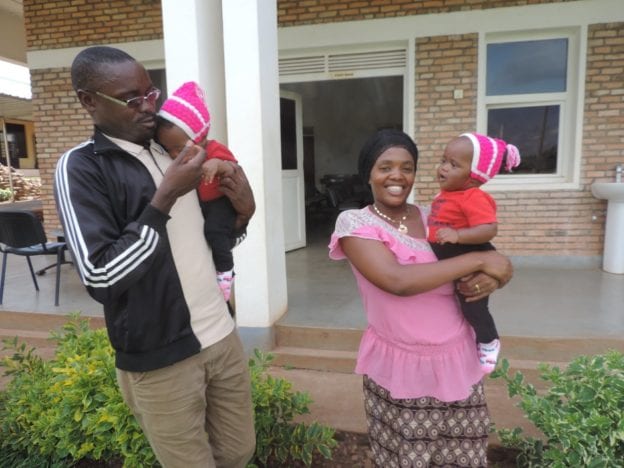 Diane Uwingeneye knew during pregnancy that her belly was unusually large. At four months, people said she looked six months along. It was her first pregnancy, and she thought she was simply having a big baby, or carrying a lot of fluid.

An ultrasound showed a healthy, growing fetus. But when she went into labor two months early in May 2018, she and her husband, Anastase Niyonsaba, rushed in an ambulance to Kirehe District Hospital, about an hour’s ride from their home in eastern Rwanda.

At the hands of trained clinicians, Uwingeneye safely gave birth to a daughter, who they named Pamela. When the placenta didn’t follow, though, the delivery team re-checked the 29-year-old mother. To their surprise, the couple learned a second baby soon would be coming—and it was in a dangerous, horizontal position.

Nurses and Dr. Sadoscar Hakizimana, the hospital’s only OB-GYN surgeon, quickly prepped Uwingeneye for a cesarean section. Less than 15 minutes later, Pamela had a twin sister, Nelly. The ultrasound earlier in Uwingeneye’s pregnancy had not revealed her.

“That was something unexpected,” Niyonsaba said in March, 10 months after that surprising day, holding a happy, sleepy Nelly in his arms. “But we are happy that we have twins.”

Uwingeneye’s health and the twins’ safe births are a testament to the dedicated staff at Kirehe District Hospital (KDH). The hospital is supported by Partners In Health, known in Rwanda as Inshuti Mu Buzima.

The care the parents received only began with their children’s birth—the twins’ healthy development in the year since has been empowered by a vital program called Expert Moms. The program is embedded in the hospital’s maternity ward, neonatal care unit, and Pediatric Development Clinic. It’s designed to meet two rapidly growing needs: better outreach and education for new parents, and better support and care for babies born with complications.

Babies born prematurely, with low birth weights or with feeding difficulties often are underserved, particularly in poor countries. Without adequate support, breastfeeding difficulties can lead to nutrition and health problems—even death—that otherwise would be preventable.

Rwanda’s Ministry of Health, supported by PIH, is addressing this gap with a multi-faceted, multi-year approach to strengthening care for newborns and mothers with complicated childbirths, or difficulty breastfeeding. Expert Moms are a key part of that program, and help train new mothers in breastfeeding techniques, assessing health risks for their newborns, and other parenting skills.

Nadine Nirere, 31, and Faisi Uwitonze, 28, are the two Expert Moms at KDH. The hospital serves nearly 400,000 people in a rural, agricultural region near Rwanda’s borders with Tanzania and Burundi. Uwitonze received prenatal care herself at KDH, delivered her youngest son there, and received vital care after childbirth. Nirere is a nurse originally trained in Burundi.

In their full-time, paid employment as Expert Moms—PIH hired both women last August—Nirere and Uwitonze receive additional training from PIH staff and pass their knowledge on to other new mothers with complicated births, through regular follow-ups, visits in the neonatal ward and education sessions.

“I want to help other mothers receive the same training and support I did,” Uwitonze said.

Uwingeneye, and her twin daughters Pamela and Nelly, are living examples of that support.

Both girls had very low birth weights. Pamela weighed less than 3 pounds (about 1.3 kilograms) and Nelly was even lighter, at about 1.2 kg. Before they could leave the hospital, they needed to reach at least 4 pounds (1.8 kg) and show steady growth. Uwingeneye also needed to rest and heal, while she and her husband learned how to care for their tiny twins.

Uwingeneye stayed at KDH for two months after her twins were born. She and Niyonsaba learned about the Expert Moms program and pediatric clinics during that time, and have been consistent visitors since. Instruction and support from the Expert Moms, a social worker in the clinic, and pediatric development nurses all have helped Pamela and Nelly grow to the happy, smiling, and chubby babies they now are, a year later.

Pamela and Nelly celebrated their first birthday May 1—a milestone their parents marked with joy.

“A year ago, you were not expected to be alive,” Niyonsaba wrote, on a photo of the girls that he made into a card for their birthday. “Now you are growing up.”

Staff at the pediatric clinic have witnessed that growth. The clinics are held at health facilities across Kirehe and the nearby Rwinkwavu area, in Kayonza District. Infants born preterm, with low birth weights, or other complications receive medical, nutritional and developmental care—in the critical early years of life—through regular visits to the clinics, which are supported by PIH.

“We want them to reach their full potential of development,” he said. “When we see young children improving—that’s my favourite part (of the job). When they have issues, and they come back and they are growing, they are improving, they are active.”

One such clinic was on a March morning at KDH. The clinic is held in a single room at the hospital, and while a new building is under construction, the setup makes for a crowded setting. Mothers sat on a large rug with their infants on their laps or playing close by, as Expert Moms Nirere and Uwitonze led an educational session about premature births and how to help malnourished babies gain weight and grow healthy.

“There are many things mothers don’t know about breastfeeding, and sometimes that can lead to weight loss,” Nirere explained.

It was a Tuesday, which meant the clinic was specifically for parents of premature babies. Clinics on different days support children with developmental disabilities, or other growth challenges.

Jeannette Muhanyana, a 38-year-old subsistence farmer, also was in attendance, with her 2-year-old son, Olivier Manishimwe. She said the care she and Olivier have received has been invaluable. Olivier was her sixth child, and her first delivered by C-section. She has been visiting the pediatric development clinic with him regularly for the past two years, while receiving additional PIH support including food packages and financial help for costs of traveling to and from the hospital.

Muhanyana said the clinic also provides a circle of friends.

“Most of the moms meet here, and we continue to communicate,” she said. “We go to visit each other, and help if each other’s children are sick.”

The need for parental support in Kirehe is enormous.

The district includes the Mahama Refugee Camp, which opened in 2015 and is home to more than 60,000 people fleeing political and ethnic conflict in Burundi. While the camp has two health centers, complicated cases are referred to KDH. Because of the camp and other factors, Kirehe’s population has been booming in recent years—and, correspondingly, so have hospital births.

Hakizimana said the hospital had 3,366 deliveries in 2017. But as of March, they were seeing “around 30 to 40 a day.” If that trend continues, it would translate to about 13,000 babies a year—a fourfold increase from just two years ago.

Nirere and Uwitonze hope more Expert Moms like themselves will receive training and join the team at KDH. The two women work every weekday and rotate weekend shifts, but that is not enough for the need.

“There are so many mothers,” Nirere said.

As if on cue, Dr. Mylene Irakoze walked out of the neonatology ward, greeted the two Expert Moms, and stated their value frankly: “We need them every day.”

PIH provides approximately two-thirds of all its services to women and their children – representing close to 1 million women’s health visits, family planning visits and deliveries each year. See how PIH supports maternal and women’s health across all the countries where we work.