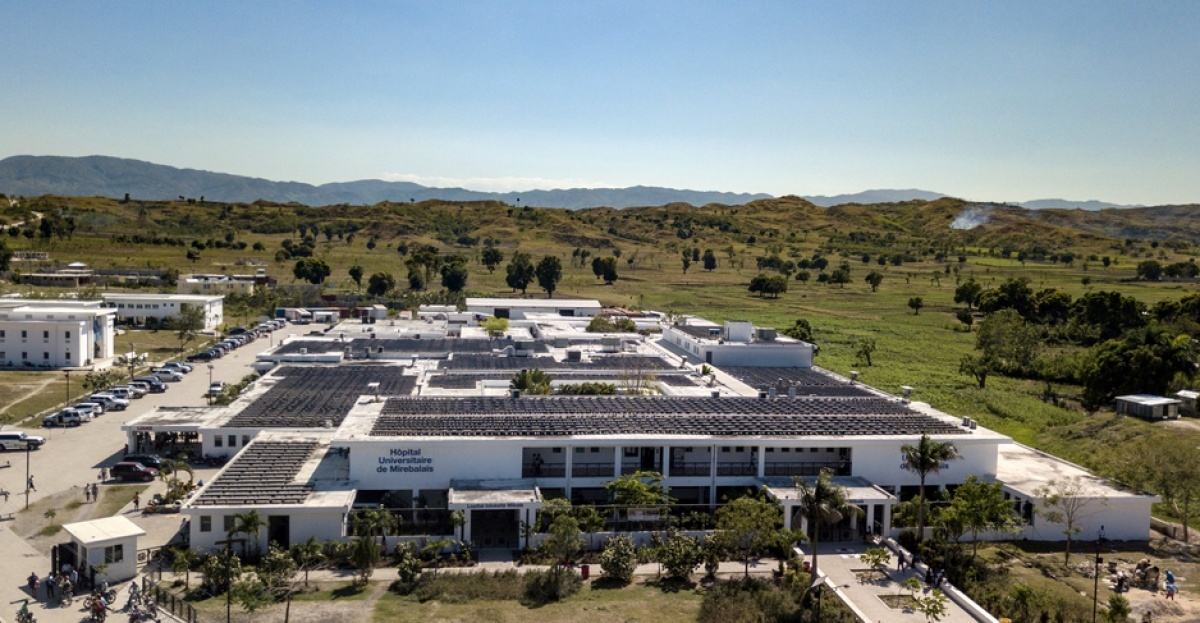 When a pregnant woman was rushed to Saint-Nicolas Hospital in Saint-Marc for severe bleeding, Dr. Charnee Magalie Villemenay—now a second-year medical resident—had to act quickly, as the baby’s heart rate had begun to drop.

The mother desperately needed a blood transfusion, but there was a dilemma: All of the blood in the laboratory staffed by Zanmi Lasante (ZL), Partners In Health’s sister organization in Haiti, was reserved. Recognizing that this patient was in more critical condition than others, Villemenay reached out to patients across several departments and convinced them to give her some of the blood being held. Shortages like these sometimes occur due to lack of refrigeration and supply chain disruptions.

After successfully retrieving enough blood, the woman gave birth to a baby boy. Two months later, Villemenay received a photo of the mother and her son.

“I was very moved to see them again,” says Villemenay. “Now, the infant is turning 1 and his mother has asked me to be his godmother. She said: “Dr. Villemenay, my son and I, we owe you our lives.’”

That was the most rewarding moment of Villemenay’s family medicine residency thus far, she says. Though being away from her close-knit family and fiancé in Port-au-Prince has been challenging for Villemenay, the experiences she has had in Saint-Marc, a city in Haiti’s lower Artibonite department, have made it worth it.

“My colleagues, especially those in my cohort, have practically become members of my family because we spend so much time together and look out for each other,” she says. “This residency has allowed me to mature and develop a sense of independence, responsibility, and leadership.”

The three-year family medicine residency program—which has trained 37 residents since it launched in January 2012 in Saint-Marc—is paired with five other residency programs based at University Hospital in Mirebalais, which received accreditation from an international oversight group in January 2020 for meeting the highest global standards as a teaching institution.

News that University Hospital had earned accreditation from ACGME-I—the international branch of the U.S.-based Accreditation Council for Graduate Medical Education—came with great joy, emotion, and humility, says Dr. Rodney Destine, family medicine residency program director at Saint-Nicolas Hospital. Since the announcement, faculty and residents alike have noticed the accreditation’s impacts on the program.

“It has strengthened the academic activities, regulated residents’ working hours, and has improved the training of trainers,” says Villemenay.

Dr. Mitchnaider Joseph, chief resident of the family medicine residency program at Saint-Nicolas Hospital, echoed Villemenay’s thoughts, adding: “The accreditation has motivated leadership to make elective rotations, such as intensive care, available to residents. It has also helped create a stronger mentorship program to allow residents to achieve their goals in each rotation.”

The family medicine residency is the only program of the nine that ZL offers that is housed at Saint- Nicolas Hospital. Nearly all the residents who have completed the program remain in Haiti, except for two who went on to do a fellowship in France and two who are currently living in the United States. Of the remaining 33 residents, 16 of 30 physicians continue to work within the ZL network and the remaining 14 work outside of the ZL network. The graduates are working mostly in rural areas and in the public sector.

Since 2012, across all residencies—from surgery and pediatrics to neurology and emergency medicine, ZL’s medical education program has trained 152 Haitian clinicians, 98% of whom have stayed to work in Haiti after their graduation, with 88% working at ZL-supported facilities or in other rural health centers.

Joseph, who plans to do a fellowship in medical education after completing the family medicine residency program, hopes to promote the specialty in communities to help more people access quality care.

He has seen firsthand the impact that family medicine has on patients. In particular, he recalls a 16-year-old girl who had stopped menstruating for more than three months, and came for a consultation with her mother. Joseph said the visit started off tensely, as the patient’s mother insisted he set them up with a gynecologist. After all, they admitted, they were only there because it was too difficult to schedule an appointment with a gynecologist.

Using a holistic approach during the appointment, and explaining the full scope of services they offered, Joseph created an atmosphere that relied on trust.

“She had no idea about the availability of family doctors at the hospital,” says Joseph. “Together we established a follow-up schedule and thanks to ongoing care, the girl was diagnosed with polycystic ovary syndrome (PCOS) and was properly cared for.”

In addition to limited access to primary health care, Haiti—like other low-income countries—faces a shortage of well-trained health professionals and geographic inequalities, whereby people living close to major cities have access to care.

“Medical training is one of the key strategies that can contribute to strengthening the health system in the short-, medium-, and long-term,” says Destine. “Family medicine is a specialty that can serve as a lever to improve the health of the Haitian population and an antidote to despair.”