Farewell to the Grave: Bobby’s Battle with Multidrug-Resistant TB 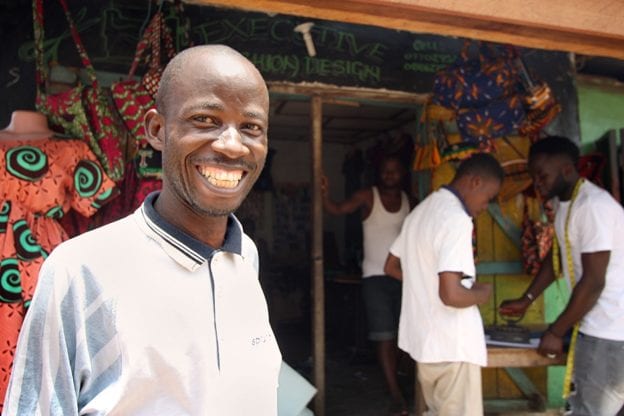 In January 2018, Bobby Togar arrived at Liberia’s national tuberculosis annex in the capital of Monrovia for the second time in his life. The 42-year-old thought he was going there to die. He couldn’t eat, and could barely draw the breath to talk. With a body mass index of 10—half what it should be, his legs appeared as thin and spindly as knitting needles. As he was carried into the ward, his family went home to build his coffin.

“Bobby was just skin and bone,” said Dr. Daniel Duré, Partners In Health’s TB clinical mentor at the time. “When I saw him, I thought of the skeletons we used to study bones in medical school. It was like having a living skeleton in front of me.” He had treated many hundreds of TB patients in resource-limited settings, but Togar was among the sickest he’d ever seen.

The team at the TB annex—made up of Ministry of Health physician assistants and nurses, with support from PIH—was distraught. Togar had been discharged from the TB annex three years earlier, having been admitted for TB following repeated misdiagnoses: everything from typhoid, to “African sun,” to witchcraft. He had since returned home to Rivercess County in eastern Liberia, but a common cocktail of factors had conspired to prevent him returning to the capital for his medication refills. Among them were stigma—pervasive in Liberia, given the widespread lack of access to information about TB—and distance. Rivercess is a four-hour drive from the capital, along rough, easily waterlogged roads that can be unaffordable to travel for those relying on public transportation.

And so Togar had stayed in Rivercess, where he worked as an English literature teacher at an elementary school, doggedly pushing through his pain to inspire his students. He worked until he could barely breathe, unaware that TB was tightening its grasp on his lungs. When he arrived back at the annex, they were severely damaged, with TB’s telltale white lesions throughout both, like heavy clouds eclipsing the sun.

Dr. Maxo Luma, director of the TB program for PIH in Liberia, alongside the Ministry of Health, swiftly arranged a Gene Xpert test, a molecular diagnostic tool that detects the DNA in TB bacteria. The Haitian infectious disease practitioner, who arrived in Liberia in 2015, used the tool to arrive at Togar’s new diagnosis: multidrug-resistant tuberculosis, or MDR-TB, an especially hard-to-treat variant that kills about 230,000 people globally each year, according to the World Health Organization.

Liberia is among the top 30 countries with the highest total number of TB cases, and the top 10 for its TB incidence rate of new yearly cases, at around 300 people living with the disease per 100,000, reports the WHO. Because of pervasive health inequalities and lack of access to care, the country is particularly prone to MDR-TB cases, especially in the wake of the Ebola outbreak of 2014, which further fractured the already weak health system. In the close-knit communities where many Liberians live, airborne infectious diseases like TB spread rapidly. Duré said he treated one patient whose home was a bathroom that she shared with nine other people.

When PIH began partnering with Liberia’s Ministry of Health in 2015 to roll out a comprehensive TB program, the cure rate for the deadly disease was 28 percent. Clinical staff are now working to reverse that, deploying resources and training to help TB patients buck the trend and complete their treatment regimens. It is challenging work for all involved. Patients grapple with debilitating stigma and gruelling side effects that include hearing loss and depression. Meanwhile, clinicians are hampered by the lack of supplies and medicines, as well as funding to provide universal health coverage and treatment country-wide. Considering these constraints, they have only reached about 50 percent of known MDR-TB cases in Liberia.

PIH has seen success, though, in its partnership with the Ministry of Health to transform the TB annex, with its once-leaky roof, into a freshly painted, dignified space of care and support. It’s a place where psychosocial officers see patients regularly, where PIH staff frequently go above and beyond the call of duty by finding adolescent mentors for teenage patients, or tracking down extra food for those in need. After all, “medicine is not only about treating patients, it’s about treating humans,” said Duré.

Togar began a 20-month treatment regimen, beginning with a painful eight months of daily injections. Because his BMI was so low, clinicians were careful to find the right dose to maximize his chances of survival, and so the early phase of his treatment lasted longer than expected.

According to Duré, despite the myriad clinical challenges and lack of resources, the biggest hurdle to Togar’s success was something fundamentally human. “Bobby didn’t believe he could survive. He said to me, ‘Doc, why are you doing all this for me when you know I will die?’” The doctor looked him in the eye and told him the truth. “I said, ‘I am not God, but from my knowledge, this is not your time and you will survive.’”

How did he know? Years earlier, in Haiti’s Central Plateau, Duré had treated a patient with an even more advanced case of MDR-TB than Togar. And that patient had survived. The doctor remembered his approach back then, and prescribed similar supportive care for Togar. First on his list was something simple but, at the time, unimaginable: a walk outside.

“Let’s go outside to see the sun,” Duré suggested. Togar looked at him, incredulous. “He couldn’t walk, so I told him to put my hand on his shoulder.” At first that, too, seemed absurd. “He was afraid to do that because he felt he was cursed, and he wasn’t used to interacting with doctors in that way,” he recalled. “So I took his hand and placed it on my shoulder and I said, ‘I’m a human just like you.’”

That day they walked just two steps together, but they might as well have scaled a mountain. Togar’s outlook transformed. As he started to believe in the possibility of survival, his natural charisma returned. He began to charm the nurses, making seemingly extravagant requests for food that he still wasn’t physically able to eat: fufu, a Liberian cassava paste, and delicious, hard-to-make soups.

The nurses were doubtful of Togar’s survival, but Duré remained confident. Togar had turned an emotional corner. “Patient care is a two-way collaborative process,” he said. “Every TB patient requires a different recipe, and I could only help Bobby when he could tell me how to help him.”

As Togar regained his weight and spirit, his natural leadership skills began to shine through. In the run-up to his first TB diagnosis, he had been poised to become the superintendent of Rivercess County—an imminent appointment that was derailed by his illness. But as his health improved, he was elected by other patients to another important position: chairman of the MDR-TB ward, or chief motivator. “Bobby told everyone, ‘If I can make it, all of you can make it. It’s not magic, it’s because I took my treatment,’” said Luma, calling him “a born leader.”

Togar didn’t only motivate his fellow patients. The physician assistants and nurses who ran the TB annex before PIH arrived have also learned from him. “Before we came, they didn’t have any true mentors, so any time they saw patients as sick as Bobby, they would lose hope,” said Duré. “From him they have learned never to give up.”

In July 2018, six months after one of the most deadly bacteria on earth brought Togar to his knees, he was standing tall again. PIH and Ministry of Health staff were by his side, cheering him on, when he walked out of the TB annex, a place he thought he would leave in a coffin. As he has successfully completed the intensive phase of his treatment, he now comes regularly for follow-up visits and close monitoring with the overall TB team. Togar continues to serve as chairman and counsellor of the MDR-TB ward, plumbing the depths of his story to serve others. “If Bobby tells them the treatment works, they believe him,” said Luma. “He’s a superstar.”

That’s true in more ways than one. During the Liberian civil war, Togar had become adept at tailoring while living as a refugee in neighbouring Cote d’Ivoire. With widespread recognition as a talented designer, he has now opened a boutique in Monrovia. There he makes beautiful clothes and purses in Liberia’s traditional lappa cloth—vibrant patterns, yellow stripes, and, in one of his most popular designs, an inky blue sky decorated with golden rising suns.

Although Togar is on the mend, he has had trouble remaining financially stable throughout his illness. And so, PIH continues to accompany him on his journey in a different way. This week, he received the gift of an industrial fabric printer that can create more than 800 lappa designs. On World TB Day, Togar plans to bring some of them to the TB annex, where he’ll take to the mic, using his talent and his breath—something he believed he had lost—to inspire other patients with an excerpt from his book-in-progress: Farewell to the Grave.

The staff at the annex are proud. “When he told me the title, I had to hide my face because I thought I was going to cry,” said Duré. “It’s so powerful.”

Read more about how PIH is fighting tuberculosis by bringing modern rapid TB testing directly to the communities where it is needed most in Lima, Peru.