For A Boy in Rural Mexico, Hearing Aids Offer New Sense of Freedom 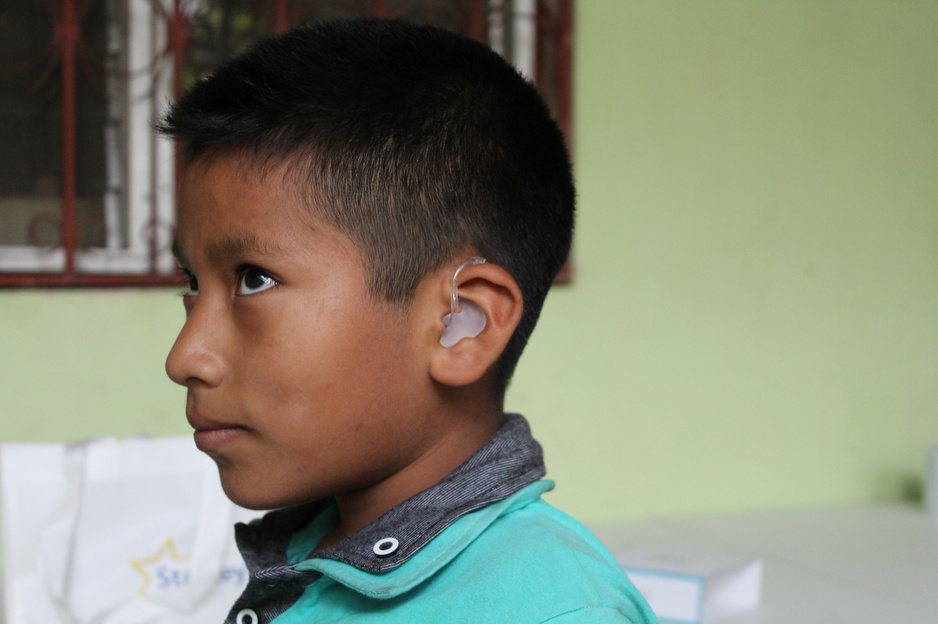 When Carmela Sánchez gave birth to her son, Rusbin Gómez, it was not apparent that he was deaf. It was only after he turned one year old that Sánchez and her husband, who live in the coffee-growing Sierra Madre region of Chiapas, Mexico, realized that Rusbin did not respond when he was talked to and had no reaction to the noises around him. He had also started falling behind other children his age in saying his first words.

Worried and unsure what was happening, the Sánchez family took Rusbin to a doctor, where they learned that their little boy could not hear the world around him.

At first, they did not know how to react; they weren’t expecting to face a challenge like this, and had no idea how to overcome it in their small, rural community of Laguna del Cofre. But they deeply loved Rusbin, and were determined to fight so that he could enjoy a better quality of life.

Their search for quality care took many years, and eventually led them to Compañeros En Salud (CES), as Partners In Health is known in Mexico.

CES began collaborating with Mexico’s Ministry of Health in 2011 to support care at 10 clinics in remote areas, serving more than 140 communities in rural Chiapas—including Laguna del Cofre. Primary care often is provided by first-year physicians carrying out their social service year, known as pasantes, whom CES recruits by partnering with medical schools in Mexico.

Pasantes perform a variety of tasks, from well-baby visits and regular check-ups to home visits and emergency care. Yet some patients arrive with health challenges that require specialized attention, which only can be accessed hours away in more urban hospitals.

Recognizing this gap in care, CES created a referral program to serve as a link between local health centers and government hospitals. The Right to Health Care program is dedicated to helping patients navigate the health care system and find all available resources, while addressing the barriers—such as arranging and paying for transportation and lodging—that patients face when trying to access care and alleviate their suffering.

The Sánchez family were among those needing such support, and they were not alone. Deaf people in Mexico face several structural barriers that affect their access to health care, education and other social services; these difficulties are often worsened in low-resource, marginalized areas with little access to quality health care.

Rusbin, who is now 9, is one of thousands of Mexican children who are hard of hearing. Mexico’s deaf community includes 2.4 million people—84,957 are children under the age of 14, according to a national survey conducted in 2014.

After learning of their son’s condition, the Sánchez family spent the next several years searching for ways to support Rusbin with hearing aids to help him hear and communicate better. But the process was long and difficult. They delivered various documents to a larger hospital but, in the end, an appointment was not made. If they wanted to get hearing aids, they learned, they would have to travel up to six hours to Tuxtla Gutiérrez, the capital of Chiapas—a process that would involve spending precious money on buses, taxis, lodging and food and leaving behind their jobs and kids for a couple of days. Despite these barriers, the Sánchez family held on to hope for a solution.

Then, they found CES.

When they took Rusbin to the clinic in Laguna del Cofre, where CES began providing care in 2019, Dr. Magaly Montaño referred him to a clinic in Tuxtla. That sparked a renewed push for medical care. Rusbin and his father traveled more than two hours to Jaltenango, where CES is headquartered, and spent the night for free at the house provided for patients. The next day, they woke up early to travel to Tuxtla, accompanied by Uver López, a CES driver, and Dr. Lorena Ponce de León, who leads CES’s referral program. There, at the clinic, Rusbin for the first time in his life had molds taken of his inner ear. A few weeks later, he went home with hearing aids and a new sense of freedom.

“When Rusbin put on the hearing aid for the first time he was absolutely surprised,” says Sánchez. “He kept clapping because he liked the sounds he could hear now. He’s more aware of his surroundings, he smiles a lot, and all of this helps him hang out with other kids his age.

“Thanks to Compañeros En Salud for supporting us, accompanying us at all moments,” she says. “The whole process was very quick, and in the past we never thought we would be able to get this kind of help because of how expensive it is. Thank you for staying with us.”

See how the Compañeros En Salud team is responding to the COVID-19 pandemic in Mexico.