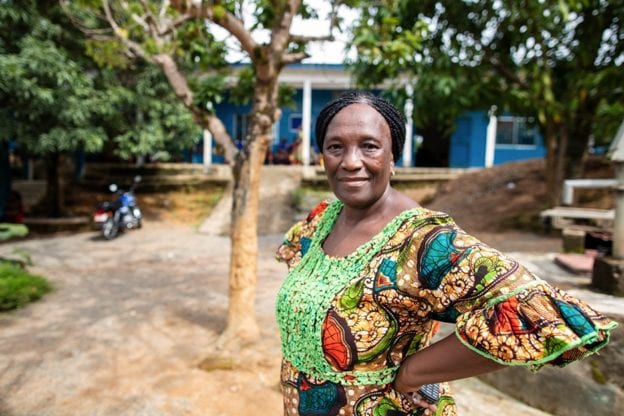 Walking around her clinic in the muggy heat, Gladys, 52, attracts a lot of attention. During the morning’s whirlwind of activity, people rush up to her from every direction: uniformed midwives, women with newborn babies strapped to their backs, heavily pregnant women. She speaks to everyone in a gentle, encouraging tone and goes out of her way to offer advice wherever possible. This is how Gladys starts most of her days as head midwife at Wellbody Clinic in Kono, Sierra Leone.

“I’m always on my feet, educating my staff, and saying, ‘Let’s not let any danger occur to our patients,’” says Gladys.

Known as Gladys to friends and colleagues, Boyama Gladys Katingor joined Wellbody, a Partners In Health-supported clinic, in 2014, and has since been trail-blazing female empowerment. At the clinic, Gladys strives to standardize a modern approach to women’s health care. And in doing so, she tackles a number of universally debated and politically charged issues—including teenage pregnancy, abortion, and female genital mutilation—by listening, loving, and, when necessary, lecturing.

Regina Korgbendeh, a traditional birth attendant at Wellbody, reflects fondly on Gladys’s approach to leadership. “There are often many people present during a woman’s delivery—from midwives to traditional birth attendants to family members,” she says. “Gladys will say firmly to the room, ‘Let us all work in harmony to keep this woman safe.’ She’s always calm, supportive, and strong.”

Gladys grew up in Longie village, roughly 30 miles from Koidu, Kono District’s capital. She is one of the few girls from her village cohort to complete her education. Following high school, Gladys trained as a community nurse for the nonprofit organization, International Rescue Committee. Her role with IRC involved coaching new mothers on how to administer basic medicines, such as anti-malarials and tuberculosis medication, to their families. After gaining significant experience there, Gladys made the decision to resume her studies and train as a midwife, leading to her current role with PIH.

Sierra Leone had the seventh highest rate of teenage pregnancy in the world, with 38 percent of women delivering their first baby before the age of 18. At Wellbody, expectant mothers under the age of 18 are invited to stay at a birth waiting home for the month preceding their labor. Here, they receive free prenatal care and meals, and enjoy a supportive environment.

“Most of these are school-going children. The girls are very shy when they arrive and feel like they’ve committed a crime,” says Gladys. “I bring them closer to me, like a mother, and ask them how they are feeling.”

Postnatal classes are also available at Wellbody following a birth, and Gladys makes sure new mothers are supported in a number of ways, including through family planning services.

“We offer approved contraceptive methods, but many women are discouraged from using them by their families,” Gladys says. “Everyone is happy to listen though, especially the young girls, and we’re now seeing an uptake.”

Abortion is another tough reality Gladys confronts. They are illegal, but not uncommon, in Sierra Leone. “They’re performed on girls in villages who come to Wellbody Clinic afterwards in very bad health,” she says. Many even face death. One-fifth of global maternal deaths result from unsafe abortions, and Sierra Leone is no exception. Gladys quickly refers them to the local hospital.

Perhaps the most challenging, and familiar, situation Gladys deals with is female genital mutilation, or FGM, a procedure commonly carried-out on adolescents. In Africa, around 3 million girls undergo FGM each year; Sierra Leone is one of the only countries where the rate is over 90 percent.

FGM often takes place in a small hut, in an area known as “the bush,” on the outskirts of a village. Multiple girls will stay in the hut at any one time, while the procedure is performed on each of them.

“When I was a child, I became part of this. It was not my choice, but something my parents wanted. It was an excruciating procedure,” Gladys recalls. “When the cut is done, veins are tampered with, and you can sometimes bleed a lot. If you bleed like this, which I did, the whole village will call you a witch. It feels horrible to be called that.”

What should a girl do if she’s encouraged to go through FGM? “If a girl confides in me at Wellbody, I will tell her of the hazards and advise her against having it done,” Gladys says.

Her advice can’t always be heeded, but her overall message to female patients and staff is hard to ignore. “I tell them, whatever happens you must reach some heights. Whatever your family says, keep going. I say don’t lie down, wakeup and keep moving. You are not just here to give birth; you are our leaders of tomorrow.”

Read more about how PIH is supporting women’s health in all the countries where we work.