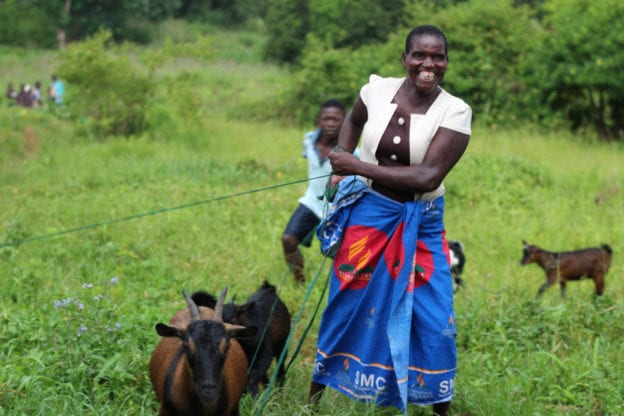 On most days, Dalitso Mkango is busy selling her vegetables in the market in the central village of Neno District, Malawi. And if she’s not selling her produce, then she’s at home working in her gardens. Rumour has it that she has some of the best produce around—likely because of the fertilizer she uses, a homemade mixture of manure from the goats she cares for at her home.

How Mkango, 45, came to own those goats—and to use them for a sustainable business—is a story that stretches over 12 years, through a longtime connection between her family, her community, and Partners In Health, known in Malawi as Abwenzi Pa Za Umoyo.

Staff with PIH’s Program on Social and Economic Rights, or POSER, first met Mkango on a visit to her home in 2007, the same year PIH began working in rural Neno District. PIH collaborates with Malawi’s Ministry of Health to provide comprehensive care for more than 140,000 people in Neno, including support for 12 health centers, two hospitals, and more than 1,200 community health workers.

POSER staff, like those health workers, visit people and families at their homes and in their communities, to provide resources and access to care. But while health workers focus on screenings for disease or physical ailments, access to medicine, and more, POSER teams visit homes to focus on social determinants of health, such as access to food, transportation, education, and economic support.

It was through those local visits that the POSER team met Mkango. During a home visit to understand her circumstances and see if there were ways PIH could support her, the team learned about the severe challenges she and her family were facing.

Mkango had learned she was HIV positive in 2006, but had been unable to access antiretroviral therapy until PIH arrived in Neno a year later. She was caring for her three children and ailing mother, despite many economic and social challenges within her family and her community.

Mkango had been taking her HIV medication diligently since 2007, but still was getting sick—likely because, at least in part, she wasn’t getting enough to eat. With her small garden, she was only able to harvest 10 bags of maize at a time, which was not enough to sustain her household of five.

Beyond providing immediate financial support to her and her family, POSER also began helping Mkango work toward financial self-sufficiency.

In 2008, the team invited Mkango to join five other women in a knitting collective. The six of them learned to knit and created wool products that were sold in the United States. After two years, when international hurdles slowed that business, the women came together and asked POSER to help them start a restaurant. From 2010-12, Mkango worked as a co-founder of the eatery, while completing formal business training that POSER provided as the women worked. In 2012, she graduated with new knowledge in business management, ready to manage and grow her income.

A year later, the POSER team gave her two goats, as part of a PIH-Malawi initiative called Goats Pass On. She now has 12 goats, significantly expanding her financial options—she recently planned to sell one of them to pay for home improvements, for example. And over the past five years, Mkango has been able to dramatically increase the amount of maize she produces, by using manure to boost her fertilizer. While she previously struggled to harvest 10 bags of maize, she now reaps more than 55 bags in each harvest, and has made more than 120,000 kwacha ($210 CAD) selling what her family doesn’t need. With her cabbage, she’s made an additional 250,000 kwacha ($438 CAD).

And most importantly, her body is much more responsive to her HIV medication.

“I’m just slender, no longer so sick,” she said earlier this year. “Before, we struggled, but now I can grow enough maize and vegetables to feed my family and run my own business. My family has no problems with food or money today.”

Mkango’s story embodies POSER’s mission. Since 2007, POSER has worked with vulnerable families across Neno to overcome financial and geographic challenges and help them realize their right to health. POSER work is rooted in PIH’s belief that medical intervention alone is not enough; in the absence of social and economic support, people can still struggle to care for themselves and their families.

In Malawi, the POSER team distributes more than 800,000 kwacha ($1,401 CAD) per month to support families with food packages, money for transportation to and from health facilities, household items, and more. The Goats Pass On initiative is one example of the long-term investments POSER makes in individuals so that they, in turn, can invest in their communities.

Victor Kanyema, POSER program manager for PIH in Malawi, has known Mkango for years and appreciates how hard she has worked to achieve success with her goats and gardens.

“It’s not easy to manage goats, you know how they are,” he said. “It requires a lot of work, which is a unique part of this program and shows you how committed Dalitso has been to raising her many goats.”

“She’s always been full of so much energy,” he said. “She’s very special to POSER.”

In part because of Mkango’s success, the POSER team is working to launch a large-scale, multi-year initiative to expand the goats program and related training. Kanyema is optimistic that many more people across Neno could benefit from goats, and their source of fertilizer.

With her ongoing HIV treatment and growing economic opportunities, Mkango is doing better than ever—an outcome that Kanyema hopes to replicate across the district.

“We are proud of her and appreciate all of the lessons she has provided to our programming, which ultimately can help others in Neno,” he said.

Learn more about how the POSER Program is making a difference in the lives of patients in Rwanda through agricultural support and in Malawi by helping young women continue their education.