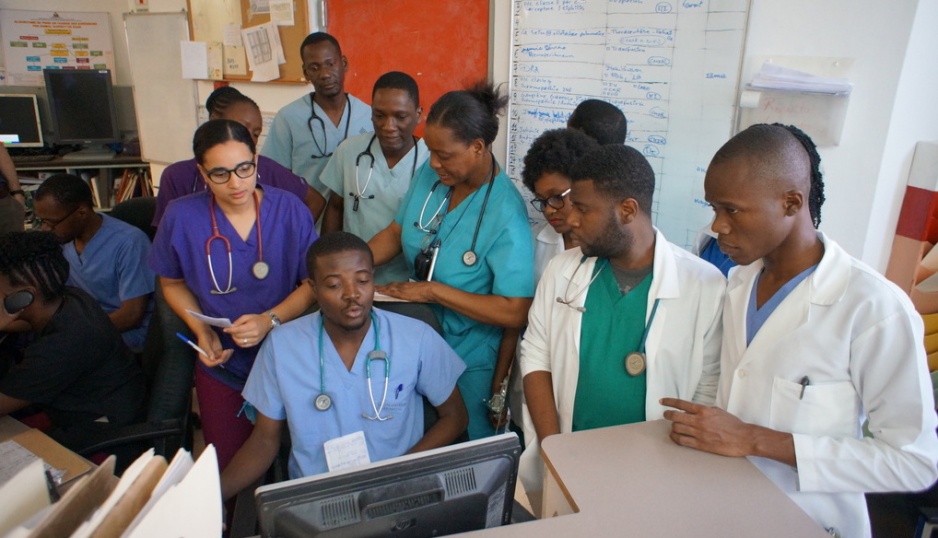 Haiti’s 2010 earthquake was devastating, killing nearly 300,000 people and injuring hundreds of thousands more. The disaster’s impact on the medical community was swift, and would be felt over the long term. The nursing school in Port-au-Prince collapsed during its afternoon session, killing every third-year nurse and instructor within. The Ministry of Health was destroyed and one of Haiti’s best medical schools and the general hospital were badly damaged.

In the earthquake’s aftermath, the need to rebuild the medical education system was abundantly clear. In partnership with Haiti’s Ministry of Health, Zanmi Lasante—as Partners In Health is known in Haiti—opened University Hospital in Mirebalais, a 300-bed teaching hospital home to specialized care and medical residency programs. Here, Haitian doctors, nurses, and other health professionals provide high-quality care to those most in need and train the next generation of care providers.

In a country, where only one-third of physicians have the opportunity to do a residency program enabling them to train in a medical specialty, Zanmi Lasante is one of the major partners of the public sector in medical education and clinical care provision. It currently runs eight residency programs in the critical areas of internal and family medicine, pediatrics, surgery, obstetrics and gynecology, neurology, nurse anesthetists, and emergency medicine.

Since the start of these programs, Zanmi Lasante has graduated 123 residents, 98 percent of whom have remained to work in Haiti, and 58 percent of them within Zanmi Lasante-supported facilities. Another 116 residents are currently enrolled. Together, these highly trained professionals are bolstering Haiti’s health system, one new graduate at a time.

Here are some of their stories:

Dr. Philippe Dimitri Henrys grew up in Hinche, north of Mirebalais. He was in medical school in Port-au-Prince—sitting in class at the Université Notre Dame d’Haïti, where his father was a professor—when the earthquake struck.

He said that experience – helping the injured in neighbourhoods near the school and witnessing firsthand the critical shortage or absence of emergency care in Haiti – played a huge role in his decision to become an emergency physician.

Henrys completed the three-year emergency medicine residency at University Hospital, and for the past five months has worked at PIH-supported St. Therese Hospital in Hinche. He is also the first president of the newly formed Haiti Society of Emergency Medicine and Disaster Medicine.

Henrys said he’s often reminded of the impact of Haiti’s growing emergency care network when he’s out and about in Hinche, at the market or on his way to work, and former patients approach to thank him for the care they received.

“They remind me they’ve been to the ER, and they really like the way I took care of them. And they appreciate it,” Henrys said. “And this is the kind of thing that really gives you a sense of purpose. To know what you’re doing is useful, to know it helps people, to know it improves their daily life.”

Dr. Ketly Altenor grew up in the western coastal city of St. Marc, Haiti, and lost her father at 12 years old. Her mother supported the family as a street vendor. Despite her family’s poverty, Altenor excelled in school and earned a competitive spot at the state medical school. She was accepted into the first pediatrics residency at University Hospital after graduation.

“After my training I intend to return to work in my hometown, where there aren’t enough pediatricians,” Altenor said upon the start of her residency. “I will try to extend pediatric care to remote areas of the Artibonite region. I want to work in social medicine and really help people.”

Dr. Jean Joel Saint Hubert, of Aquin in southern Haiti, knew from the time he was 16 he wanted to be a doctor.

“My aunt was a midwife and was always delivering babies,” he said. “There was a time when she was by herself…and she called me to help with a birth. There were two people in labour, and she told me to stay in the room, watch the patient, and call her when I saw the baby’s head. I saw the head and called her, but she couldn’t come because she was with the other patient.

“So I put on gloves and held the baby’s head as the baby came out. The only thing I couldn’t do was cut the cord. Ever since then, everyone—even my friends—have called me ti doktè, which is Kreyòl for “little doctor.”

Hubert decided to apply to the University Hospital medical residency program after attending an orientation about Zanmi Lasante. He liked how physicians talked about caring for patients and giving them attention. He has since taken that philosophy to heart.