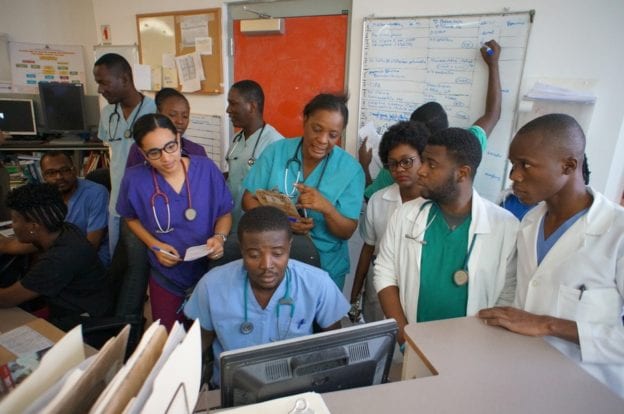 Haiti’s growing network of emergency doctors has its roots in an innovative program that pioneered emergency medical training in the Caribbean nation, paved the way for Haiti’s ongoing expansion of lifesaving critical care, and created a model for filling a severe gap in care found in developing countries around the world.

BMC’s International Journal of Emergency Medicine published results of the program in April 2018, in a study titled: “Addressing the Immediate Need for Emergency Providers in Resource-Limited Settings: the Model of a Six-Month Emergency Medicine Curriculum in Haiti.” The program addressed a well-known but hard-to-tackle problem: Short, quick trainings of a week or two helped meet immediate needs for some emergency and critical skills, but did not give doctors enough hands-on experience or expertise to manage the breadth of emergency care needs. Meanwhile, multi-year residency programs trained highly skilled specialists, but took too long to fill immediate demands and gaps in care.

Dr. Shada Rouhani, Partners In Health senior adviser for clinical operations, said she and colleagues in Haiti developed the six-month training program in the years immediately following that disaster, at a time “when there was no in-country emergency care capacity.”

The 2018 study described the “tremendous need for improved emergency services in low- and middle-income countries, to reduce the burden of infectious diseases, non-communicable diseases, and injuries.” Citing numerous sources, including the World Health Organization, the study added that up to 90 percent of trauma-related deaths worldwide occur in low- and middle-income countries.

“Like all specialties, there are too few emergency care providers,” said Dr. Regan Marsh, director of clinical systems for Partners In Health. “In many ways, emergency care (still) is relatively new on the global health stage, in terms of importance.”

Rouhani and Marsh are two of the study’s co-authors, and worked together for several years as co-directors of the emergency department at Hôpital Universitaire de Mirebalais, or University Hospital, in Mirebalais, Haiti. Zanmi Lasante, as PIH is known in Haiti, opened the 300-bed teaching hospital in 2013, in partnership with Haiti’s Ministry of Health.

The training program was a national partnership, as well.

Leandre said prior to 2014, medical professionals received basic training in emergency care at the Hospital of the State University of Haiti, in Port-au-Prince. Equipment and standard-of-care protocols were not up to date, creating challenges with handling medical emergencies across Haiti’s health system, from primary care to hospital levels.

Leandre said that in the absence of strong systems, lifesaving equipment, and specialized staff, many emergency medical situations—such as road accidents or strokes—can become “a death sentence.”

He and his colleagues knew that a better emergency system began with better education.

The group developed and implemented a six-month emergency medicine training program, designed to provide substantive instruction and experience in an efficient timeframe to boost staffing for emergency care. Fourteen physicians from across Haiti joined the program, held from March to August 2014, and received classroom instruction as well as supervised clinical time.

Israel said Marsh and Rouhani’s experience working with local staff in emergency settings at University Hospital, and with the hospital’s medical education department, gave them a strong understanding of local context that was invaluable in designing the program’s curriculum, and ensuring it was relevant in Haiti.

All 14 physicians completed the program successfully, the study notes.

“All improved from their pre-test to post-test. At the end of the program and nine-month post-program evaluations, participants rated the program highly, and most felt they used their new knowledge daily,” the study states.

Marsh said the majority of the program was spent on the job, as each participant had to spend 180 hours in University Hospital’s emergency department, working in conjunction with herself, Rouhani and other visiting faculty in emergency medicine.

“Everyone said that was a key component of the learning,” Marsh said.

The program’s effectiveness continues to resonate today, as the six-month training paved the way for a three-year emergency medicine residency program at University Hospital. The program, supported over its first four years by PIH Canada and the Slaight Family Foundation, continues to thrive and remains the only emergency medicine residency in Haiti.

“The six-month training was very important in the preparatory phase of the residency program,” Israel said. “It allowed leaders to anticipate specific needs and hurdles to overcome, and plan accordingly.”

Israel added that two family physicians who participated in the course were able to continue in-depth emergency medicine training, and have become key players in the residency program.

The residency began in 2014 and graduated its first class in 2017. The latest group will graduate in coming weeks.

“We now have 12 fully fledged Haitian emergency docs—and we’re about to have 18,” Marsh said.

Marsh said the training program and residency have improved services and resources not only at University Hospital, but at health facilities across the country.

“The training program strengthened the first network of emergency medicine providers (in Haiti),” she said. “It’s a great success story.”

The program could lead to success stories in other countries, as well, as a model for filling vital gaps in emergency care. Rouhani, Marsh and others held an emergency medicine training with the PIH team in Liberia in May, for example, and will return in October for additional instruction.

“There is growing momentum at a number of our sites, and Haiti is a nice example of fulfilling the potential,” Rouhani said.

International awareness and recognition of the need for emergency care is growing, as well.

At a May session of the World Health Assembly, the decision-making body of the World Health Organization, attendees created a resolution that noted, “the lack of investment in frontline emergency care is compromising effectiveness, limiting impact and increasing cost in other parts of the health system.”

Additionally, the resolution called on all member states to, “create policies for sustainable funding, effective governance and universal access to safe, high-quality, needs-based emergency care for all, without regard to sociocultural factors.”

Rouhani said the lasting impacts of the Haiti training program—and the nationwide growth of emergency services—serve as a real example for others.

“The speed at which it has developed, the fact that it has become self-sustaining, and the fact that over the course of a short time you’ve seen huge impacts for patients, who are now receiving higher quality emergency care,” she said, listing positive results. “There are patients who are alive today who would not have been alive if these emergency care programs and systems hadn’t been there.”

Learn more about PIH’s Emergency Medicine Residency program in Haiti, and the impact it has had on Dr. Jimmy Plantin and Dr. Faikha Colinet, two of Haiti’s first locally trained emergency physicians.