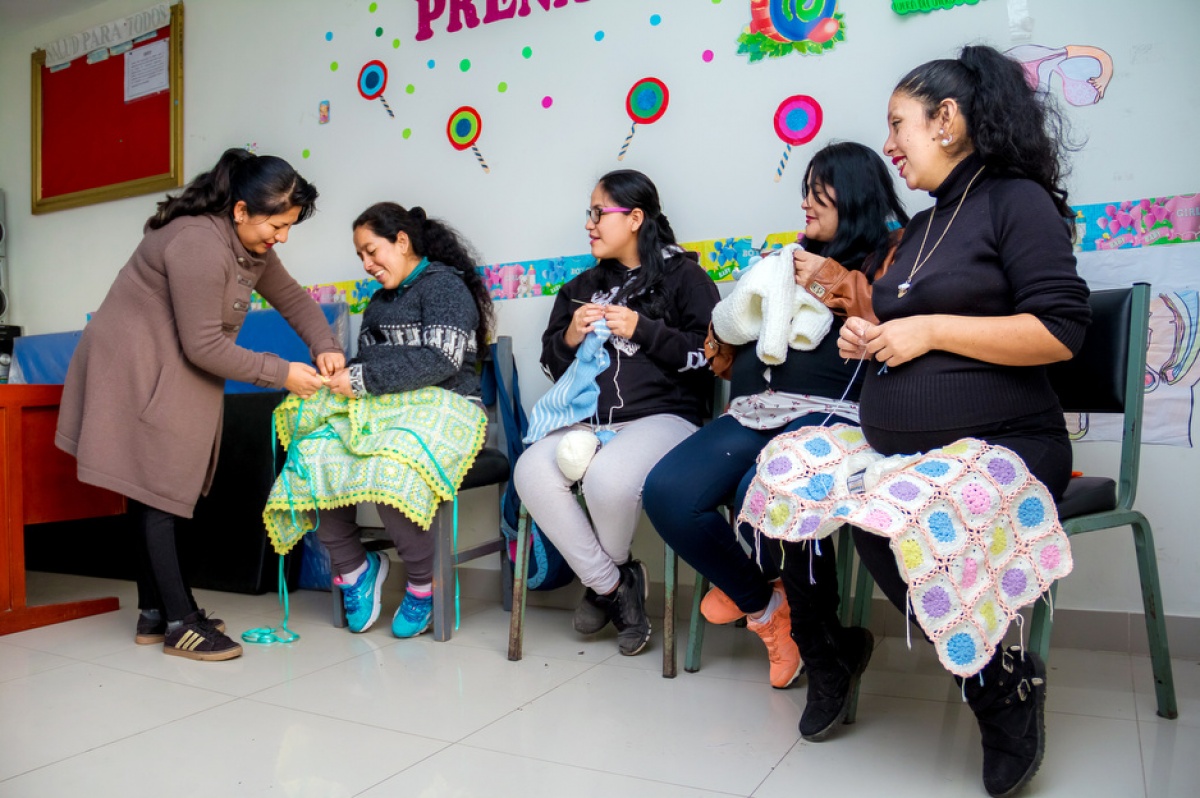 In a sunlit room in Carabayllo, a woman grasps a strand of yarn and slips one of her needles through it. Between the needles is more than the tiny sweater she’s knitting. Wound up in the yarn are years of hopes and dreams, and not just for her own future.

The woman is one of several mothers who are part of Wawa Pacha, a knitting cooperative for new and expectant mothers organized by Socios En Salud, as Partners In Health is known in Peru.

Socios En Salud has worked in Peru since 1994, when it responded to a deadly outbreak of multidrug-resistant tuberculosis in Carabayllo, an impoverished district about 20 miles north of Lima. In the years since, it has expanded its programs throughout the district, providing a range of health services and social support for the mothers, children, and families of Carabayllo’s hillside communities.

Wawa Pacha is one of those programs. From sweaters to blankets to beanies, the co-op has many products, but one mission: to help mothers earn income to keep their families healthy. It’s a mission that the co-op has called “knitting knots of love.”

When Diana Hernández joined Wawa Pacha, she had never knitted before. The 34-year-old from La Flor started the classes when she was six months pregnant, with three kids at home, and she had never threaded a needle in her life.

In just a few months, she was making clothes for her children. And she didn’t stop there. Among her creations are dresses, pants, sweaters, and toys.

“Since I learned to knit, I consider it to be an art,” Hernández says. “Now I consider myself an artist.”

That artistry has paid off in ways she wasn’t expecting. She estimates that she’s sold as many as 100 products since she took up knitting—funds that she has used to put food on the table and keep her family healthy.

Although women are essential to Peru’s economy, they are underpaid and make up the majority of the population living in extreme poverty. In communities such as La Flor, women not only face physical and mental health issues, domestic violence and food insecurity, but also the fear of not knowing when or where their next paycheck will come.

Helping women like Hernández generate income has been one of Wawa Pacha’s main goals since it began as a pilot project in 2017, as Socios En Salud was expanding its maternal health services in Carabayllo.

Wawa Pacha began with 15 mothers, all from Carabayllo’s hillside communities. Each week, the women would gather for knitting classes, where they learned to make baby clothes, accessories and toys. Then, they sold those products online and at local craft fairs.

By 2019, Wawa Pacha was incorporated into Socios En Salud’s maternal and child health program and achieved its highest rate of production and sales of baby clothes yet, in partnership with the La Flor y Su Majestad Hiroito Health Center, where spaces were set up to create and sell the products.

The results were promising, especially in a district where nearly one in four families lives in poverty, and every last dollar counts.

Between folds of fabric, the future began to take shape, one stitch at a time.

More Than A Business

In the years since, Wawa Pacha has grown into an established cooperative. While membership has fluctuated during the pandemic, currently hovering around eight women, the co-op has become a space where new and expectant mothers can develop their knitting skills, sell products, and learn the basics of entrepreneurship—all on their own schedule.

“This project allows us to generate income without disregarding the health of our babies,” says Elvir Dominguez Soto, a 37-year-old mother in La Flor. “It’s difficult to keep a fixed work schedule when you have a baby in its first months of life.”

The women manage their own schedules and coordinate group meetings via text, giving them autonomy and control over their money and how they earn it.

And they’ve grown their business skills, too. The co-op advertises its assortment of handmade products on social media and in glossy online catalogues. And it ships the products across Lima, delivering dresses, pants, dolls and more directly to customers’ doors.

But Wawa Pacha has always been more than a business endeavor.

Soto has been part of Wawa Pacha since the beginning. The co-op has been a source of community and support for the mother of three, who wakes up at 7 every morning to check on her baby.

The past year has been immensely difficult. Just as Soto found out she was pregnant with her third child, her husband lost his job and got sick. As health and financial concerns burdened her family, Wawa Pacha—and its built-in network of peer-to-peer support—was a lifeline, as well as Socios En Salud’s mental health care, nutritional support and other health services that she and her family accessed.

“The maternal and child care through Socios En Salud has helped answer my questions, which makes me feel more at ease,” says Soto, whose son was delivered via cesarean section and has since been healthy.

Mental health support is crucial for women at all stages of pregnancy. Globally, mental health conditions like depression affect as many as 10% of pregnant women and 13% of women who have just given birth, according to the World Health Organization. In developing countries, those numbers are even higher, affecting 15.6% of women during pregnancy and 19.8% of women after childbirth. As many as 22% of the pregnant women in Wawa Pacha suffer from depression and receive mental health support from Socios En Salud.

At each meeting, the women of Wawa Pacha share stories, laughter, and tears. They are mothers, new and seasoned, and each gathering is an opportunity to exchange far more than yarn and needles.

Their knitting skills have improved, too.

It used to take the women seven days to make just one product, because they had to look after their newborns, Hernández recalls. But nowadays, they can make the products much faster. She’s especially proud of a toy llama she made in just one day—an accomplishment she couldn’t have imagined a few years ago.

“Since I started to knit clothes for my baby, I haven’t stopped,” says Hernández. “When I finish a product, I feel happy and I keep doing more, because each one is better than the last. Knitting and Wawa Pacha gives me a feeling of peace.”

Learn how telehealth apps are helping patients connect to healthcare providers and resources in Mexico during the COVID-19 pandemic.