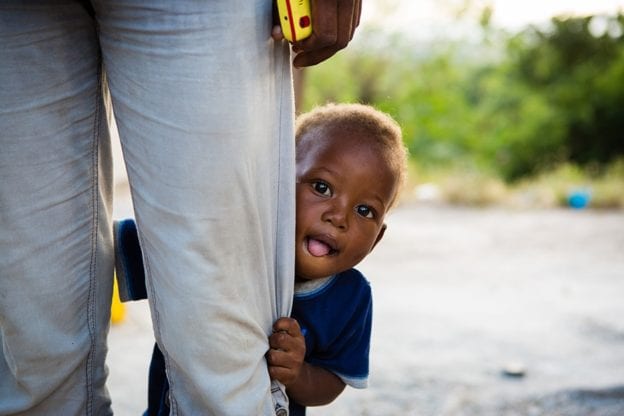 The Partners In Health truck kicked up gray dust as it rolled to a stop, just down the hill from the two-room shack where 17-month-old Lovenyou Pierre lived with seven of his relatives. Lovenyou’s mother, Jodanie Louis, emerged from the modest home, and he followed close behind.

Lovenyou tightly gripped his 25-year-old mother’s worn jeans and stared at the visitors with bright, liquid brown eyes. His short curls were a light rust color. He wore a blue T-shirt that said “Tough Guy,” and had nothing on his bottom except a fine layer of dust. He had been sick for the past several days with diarrhea—possibly the result of drinking unclean water collected from the nearby river. The closest pump was a “bon ti marche,” or good little walk, of about an hour.

Lovenyou’s tummy troubles weren’t why staff with Zanmi Lasante, as PIH is known in Haiti, were visiting. They had come to follow up on Lovenyou’s visit, four months earlier, to the malnutrition clinic in Boucan Carré, where he was diagnosed with severe malnutrition. He was just past his first birthday and weighed 17 pounds—well below the normal growth curve for boys his age, according to the World Health Organization—and measured a below-average 29 ½ inches.

Roughly 1 in 5 children are starving in Haiti, and 1 in 3 are stunted because they don’t have enough to eat. In an average month in 2016, 127 patients received care and nutritional supplements at the malnutrition clinic in Boucan Carré. That’s just a fraction of the total number of starving children PIH helped last year; altogether, staff enrolled 9,000 children as new patients in the 12 clinics and hospitals PIH supports across the country.

Shortly after that first visit to the Boucan Carré clinic, Lovenyou took a turn for the worse. He spiked a fever, had diarrhea, wasn’t eating, and—scariest of all—kept losing consciousness. Panicked, Louis scrounged for the money to pay a driver to take her and Lovenyou to University Hospital in Mirebalais, a 30-minute motorcycle drive from their home.

PIH staff admitted Lovenyou immediately, hooked him up to an IV, and performed a battery of tests to ensure the toddler wasn’t suffering something in addition to starvation. (Some children’s cases become infinitely more complicated when staff discover they also test positive for HIV or tuberculosis.) Tests showed nothing alarming, but did confirm he was dehydrated and in dire need of additional nutrients.

Eight days later, Lovenyou was healthy enough to return home. Louis began taking him regularly to the clinic in Boucan Carré. When she couldn’t afford the motorcycle ride, they walked. By foot, and while carrying a sick child, it took her nearly two hours, one way. Once there, PIH nurses weighed Lovenyou and provided him with a supply of Nourimanba, the nutrient-rich peanut paste PIH produces and distributes to its malnutrition clinics.

Louis religiously fed Nourimanba to Lovenyou three times a day, and his appetite returned. She talked about the experience in a shy, quiet tone, while her son squirmed in her arms. He eventually wiggled free and shimmied to the ground to play with other children.

Lovenyou is Louis’s third child; she has two by another man, who’s no longer in the picture. Lovenyou’s father worked as a mason in the capital of Port-au-Prince and was not home often.

Louis did what she could to make a living. She took out a small loan from Fonkoze, a nonprofit with an office bordering PIH’s clinic in Boucan Carré. With 3,000 gourdes, about U.S. $50, she bought bouillon cubes, candies, cookies, spaghetti, and school supplies to sell on market days in neighboring communities. She repaid the loan, bit by bit, every 15 days. With the profits, she bought food and paid school fees.

Toward the end of the visit, Louis’s older sister, Magdala, appeared from inside their home and welcomed the visitors inside. Sunlight filtered between the wood slats of the walls and under the zinc roofing. Cups, jars, and cooking supplies covered a table across from the doorway. Clothing hung from exposed beams above. Near darkness cloaked the back room, where a single bed filled half the space. An elderly woman lay on a mat on the dirt floor. She was Magdala and Jodanie’s mother, and she clearly was not well.

She had been sick with a fever and headache for five days. Ms. Esther Mahotiere, the nutrition program coordinator, and Ms. Asmine Pierre, lead nurse of the malnutrition clinic in Boucan Carré, knelt down to speak with her. They asked about her symptoms, what medicines she had taken, if any, and encouraged her to go to the clinic.

Back outside, a heavy truck rumbled by on the dirt road below, its bed laden with bananas and hitchhikers. Lovenyou found a stick and chased neighbors through the tall grass bordering their yard. He laughed, deep dimples indenting his cheeks, and ran faster than his little legs could carry him until he wiped out on the ground nearby.

Louis, a slender woman with thick cords of hair, shook her head and smiled. It was the look of a tired mother whose child had been a bit naughty. And it carried a hint of relief.

Lovenyou still had a ways to go to recover, but in the past four months, he had gained 2 ½ pounds and half an inch in height. His condition had improved from severely to moderately malnourished, and he was now visiting the clinic every 15 days, instead of every eight.

Back in the PIH truck headed home, Mahotiere looked relieved.

When they act rascally, she said, it’s a good sign. That means they’re healthy.

Approximately 1 in 10 children in Haiti die before their fifth birthday. Malnutrition-related causes are the leading factor in these deaths. See how PIH treats starvation in babies and small children, like Lovenyou. Alongside the top-notch medical care, we’re proud of the local production and distribution of Nourimanba, the therapeutic food that is 95% effective at curing severe malnutrition.