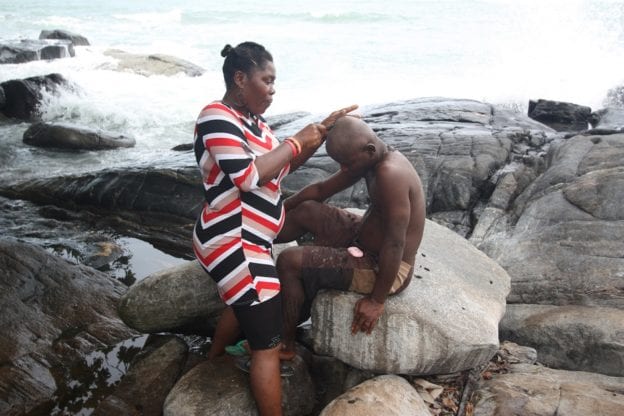 Three years ago, Winston Appleton had all but given up on life. He slept rough in the shadow of decaying mansions in Harper, Liberia. He lived on a diet of mud and “Italian white”—the Liberian term for low-grade heroin. He talked to himself, using discarded plastic straws to inhale the smoke, vapour drifting up towards the crumbling eaves. Unaware of his surroundings, he sometimes fell asleep in the middle of the road.

When Partners In Health’s mental health team first spotted Appleton in the rainy season of 2016, he was hallucinating and walking around unclothed. They tried to invite him to a nearby clinic for access to care, but when they greeted him he shied away. They knew they needed to patiently earn his trust.

The process started with a clean t-shirt. The PIH-ers left it out for him along with new pants and shorts. Then they offered him warm bowls of rice and sauce and cold sachets of drinking water. Next they gave him a toothbrush and toothpaste, and gently offered him the chance to bathe in the local river, a common spot for Harper residents, many of whom lack running water. After a few weeks, Winston agreed. Finally, wearing clean clothes and feeling good about himself for the first time in decades, Winston went with the team to the clinic, where they were able to diagnose him with schizophrenia and prescribe him an antipsychotic.

Such is the transformative work of PIH’s homeless outreach program in Liberia. Since it began in 2016, Program Manager Bethuel Nyachienga and his 12- person mental health team have helped 149 homeless people in Maryland county, home to the district of Harper, access not only medication but toothpaste, soap, and clean clothes. The results speak for themselves: since being diagnosed and entering into care, more than 50 percent of patients have moved back in with their families.

Mental health services are extremely limited in southeastern Liberia, where traditional medicine and beliefs of witchcraft carry great weight. There, homelessness is often preceded by mental illness; many people are ostracized from their families and communities once symptoms show.

But collaborating with traditional and faith healers and community leaders, PIH is working to change that dynamic. Since 2016, the team has treated more than 1,500 people for mental health conditions at three clinics in Harper and Pleebo districts and J.J. Dossen Hospital. They include the 149 people who benefited from the homeless outreach program.

“It’s not in any book. We started it to create dignity. … And then we see that they start to be accepted in society.”

Supervised by psychiatric nurses, community health workers in Harper and Pleebo districts approach homeless patients and gain their trust through daily visits, which often involve bringing them food and clean water to drink. Over time, patients accept clean clothes, assistance with finding privacy to bathe, and the chance to visit a clinic for a mental health assessment. If they are placed on medication, community health workers monitor their side effects daily, while also encouraging them to reunite with their families and attend their regular clinic appointments.

The idea came from Nyachienga, whose work in Liberia builds on his background treating patients in Dadaab refugee camp in Kenya. “It’s not in any book,” he said. “We started it to create dignity. They have no place to sleep, nowhere to eat, and no one to talk to. We give them clean clothes. We give them food. We give them medication. And then we see that they start to be accepted in society.”

Garmai Cyrus, PIH’s mental health coordinator in Liberia, said that something as simple as hygiene makes a significant difference in patients’ lives. “Bad hygiene separates people,” she said. “Wearing dirty clothes, not bathing, not brushing your teeth changes a whole lot. As we started offering hygiene care to these patients, we saw that something else was happening; they were becoming more acceptable in the community.”

The outreach program is now a cornerstone of PIH’s mental health care approach in Maryland county.

The first person whose life the program transformed was Sophie Prowd, a woman in her early 30s who had lived half her life on the streets of Harper. Her trouble started when she showed symptoms of psychosis and her husband took her to a traditional healer, who said Prowd was a witch. Prowd was sent to live with her father in Harper, but he wanted nothing to do with her, maintaining strong convictions that she was cursed.

Noticing Prowd’s matted hair and dirty clothes, Nyachienga offered her the towel from his own house. A haircut soon followed, and after a few days, she agreed to medication for her diagnosis of schizophrenia. As the treatment began kicking in, a local business owner, Linda Howard, offered to cook for Prowd and ensure she took her medication. The two subsequently struck up a friendship, and one rainy night, Prowd knocked on Howard’s door and said, “Auntie, it’s too cold in the street.” Delighted that her new friend had become confident enough to speak up and advocate for herself, Howard invited her in to stay with her and her family.

Three years later, Prowd is still living with Howard’s family, and now manages and sells drinks at the family restaurant, which is the biggest in Harper. When Howard was away recently in neighboring Cote d’Ivoire, Prowd took care of the business in her absence. “Every time I buy a soft drink from Sophie, I take great pride in knowing how far she has come,” said Nyachienga.

Step by step and toothbrush by toothbrush, the program is bringing relief from the crushing weight of mental illness stigma. Every day it is turning patients’ lives around and reducing stigma in the community. “We meet them where they are,” said Cyrus. “We respect them for that. Sometimes they don’t feel like getting in the car to go and bathe. We will simply say, ‘Are you ready today?’”

Nyachienga likes to tell people in southeastern Liberia that mental illness can be healed—and he has dozens of patient stories to prove it. The team has also taken the rare step of engaging traditional and faith healers—the local communities’ trusted, respected gatekeepers—to join together and help them provide access to treatment.

Many local healers have gone from voicing skepticism about mental illness to accompanying patients through care by checking for side effects to medication and ensuring they attend clinic appointments. Doing so, they retain their position as trusted figures and serving as a vital link in the chain of access to mental health care.

“People believe in them, they trust them, they look up to them for everything,” said Cyrus, adding that some patients prefer to be accompanied by traditional healers when they go to the hospital. “So we started talking to them about what mental illness is, showing them how their work recognizing the signs and symptoms of mental illness is important.”

“People believe in them, they trust them, they look up to them for everything.”

In a part of the country where witchcraft is used to explain atypical behavior, particularly that without a visible cause, how did they explain mental illness? “We used the brain to explain it to them,” said Cyrus. “A lot of people went through the war in Liberia, so we explained that if your brain has had trouble seeing bad things, it’s the interpretation of the brain that we can treat.”

The traditional healers have so far been able to help reach around 500 people in Harper and Pleebo communities and enroll 65 people into mental health care. As a result, many of them will never have to experience the indignity of sleeping in the street, or lacking access to food, water, and soap.

The Future of Mental Health Care

The homeless outreach program is part of a treatment plan that shows that good mental health really is a spectrum—from clean clothes to medication and restoring confidence and self-respect. The team hopes to further expand its work, running more income-generating programs and perhaps even opening a halfway home for patients who can’t return to their families.

The Liberia team also realizes that the vital need to provide mental health care to homeless populations isn’t confined to Maryland County, which is why they traveled to neighbouring Sierra Leone to train their colleagues on how to deliver care to homeless patients in Kono District. Their mentorship helped Sierra Leone’s mental health team initiate their own homelessness outreach program this year, which so far has provided ongoing care and support to 13 of the most vulnerable people in Kono.

As for Appleton back in Harper, he’s among those who haven’t yet been able to go home. His schizophrenia began during the war, and his family is no longer interested in reconnecting with him. But as Nyachienga said, Appleton is now a part of the extended PIH family and is often found sitting outside the gate to the office, chatting with the team, visiting the pharmacy for medication refills, and—most importantly of all—smiling.

See how PIH support for the Sierra Leone Psychiatric Hospital has helped staff to provide access to dignified care for patients, and help many return to their families.