Need To Know: Decision To Incision 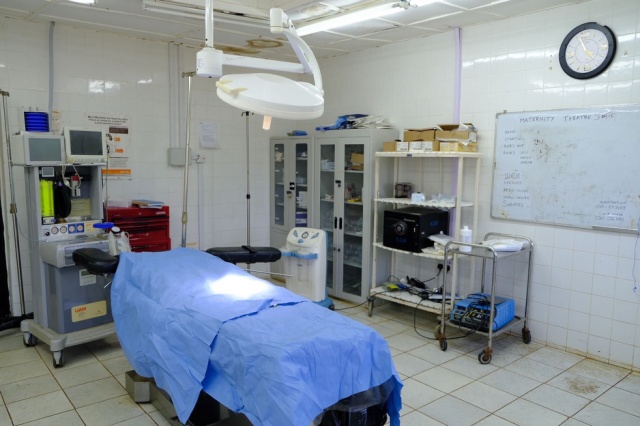 When a woman in labour arrives in a maternity ward with signs of obstetric distress, health care workers face a crucial choice: whether to pursue an emergency c-section. Because as soon as they decide a c-section is needed, it’s a race against the clock. If health care workers aren’t able to begin the operation soon enough, the life of the mother and her baby could be at risk.

This critical interval is known in the medical field as “decision to incision”—or, more specifically, the time from the decision to pursue an emergency c-section to the operation itself. Ideally, this period should last no longer than 30 minutes, according to the World Health Organization.

But in impoverished settings, that time can be prolonged by a host of factors, including a lack of staff and resources. A doctor might be far from the hospital. An operating room might need preparation. In Sierra Leone, where 1 in 20 women run a lifetime risk of dying prematurely during pregnancy or childbirth, Partners In Health launched an ongoing initiative that has dramatically reduced decision to incision times and strengthened maternal health care.

Isata Dumbuya, program manager and midwife, and Jourdan McGinn, deputy executive director, help us understand what this term means and why it matters for maternal health—in Sierra Leone and beyond.

When is an emergency c-section needed and who makes that decision?

When making their initial assessment of a woman in labour, health care workers take a variety of factors into account, including if the woman has started bleeding, if she has eclampsia and if the labour has become obstructed.

“If you come to the hospital with any of these conditions, you are an emergency case,” says Dumbuya. “We are now thinking, ‘we have to deliver this baby in order to save the woman’s life.’”

Typically, a doctor makes the call. But at PIH-supported Koidu Government Hospital (KGH) in Sierra Leone, where until recently, only one doctor worked in the maternity ward, an experienced midwife can make this decision, inform the doctor and start preparations.

The clock starts ticking from the moment a health care worker decides to pursue an emergency c-section—ideally, the operation must begin within 30 minutes or less.

What clinical and structural challenges influence the decision to incision time?

Decision to incision time depends not only on the training and skills of health care workers, but also what resources they have access to.

It’s a high-stakes situation in any hospital, but especially in Sierra Leone, where decades of colonialism, slavery and global exploitation led to widespread poverty and lack of investment in the health care system. KGH is the only facility offering c-sections in all of Kono District, which is home to more than 500,000 people.

Historically, a range of clinical and structural challenges prolonged the decision to incision time at KGH.

For example, the hospital’s maternity ward was severely under-staffed, often having only one doctor, two nurse anesthetists and a few scrub nurses. None of them stayed at KGH overnight, meaning that if a woman in labour arrived in the middle of the night, she would have to wait for a health care worker to commute to the hospital. Additionally, KGH’s cleaning staff didn’t work overnight, meaning in late hours, the operating theatre often could not be immediately sanitized for use.

The hospital also lacked material resources needed to shorten its decision to incision time. The pharmacy wasn’t open 24/7, so the nurse anesthetist might be unable to access the drugs needed for an emergency c-section. Another hurdle was a lack of phones that were consistently charged or supplied with minutes, known as airtime, without which critical phone calls—to the OB-GYN, drivers, cleaners—would be impossible, causing major delays in care.

How has PIH improved decision to incision time in Sierra Leone?

These dramatic improvements come from PIH’s Decision to Incision Initiative, launched in 2016. The initiative aims to improve staffing and resources at KGH as part of broader efforts to improve maternal health outcomes in Sierra Leone.

Through this initiative, the number of nurse anesthetists at KGH has risen from two to four, and scrub nurse staffing has increased to eight, ensuring coverage of the maternity unit both day and night. Additionally, health care workers on-call are required to sleep in the unit, avoiding the possibility of delays from transportation. PIH also set up an overnight shift for cleaning staff, so the operating theatre could be sanitized at any time.

To tackle the lack of resources, PIH has made key changes to the maternity ward, including the installation of a medical cabinet, so clinicians can access drugs at any time, regardless of pharmacy hours. PIH also has made sure that health care workers have the resources to maintain airtime and charges on their phones, allowing them to be reached at a moment’s notice.

Beyond these clinical and structural improvements, PIH also has introduced accountability measures to make these changes sustainable in the long run. Staff in the maternity ward hold weekly meetings to examine case studies and stay up-to-date on best practices. If something goes wrong with a c-section, every staff member involved—from the doctor to the driver—reflects on what challenges they faced and how they might improve to avoid mistakes in the future, building a culture of continuous learning and improvement.

Throughout the initiative, PIH has collected critical data, tracking the program’s successes—and areas for growth.

“We didn’t massively change the hospital workflow,” says McGinn. “It was about looking at the data consistently, asking how we could improve, and creating shared momentum around improving this goal.”

Why does this concept matter for maternal health?

While adding a medicine cabinet and hiring more anesthetists may seem like subtle changes, their impact has been major.

Dumbuya has seen that progress firsthand. In the early days of the initiative, she’d wake up in the middle of the night to her phone ringing, with desperate, under-resourced nurses on the line. But now, she says, she can sleep through the night, knowing that the maternity ward is running smoothly.

Still, she urges her team to stay vigilant.

“You need to be willing to push yourself and to always think: ‘This baby today could be my baby. It could be my sister’s baby. And my mother’s baby,’” she says. “This is not just someone else’s baby. It’s someone else’s life—someone’s future.”

Hear from Isata Dumbuya on the challenges posed by the intersection of the COVID-19 pandemic and the ongoing maternal health crisis in Sierra Leone.