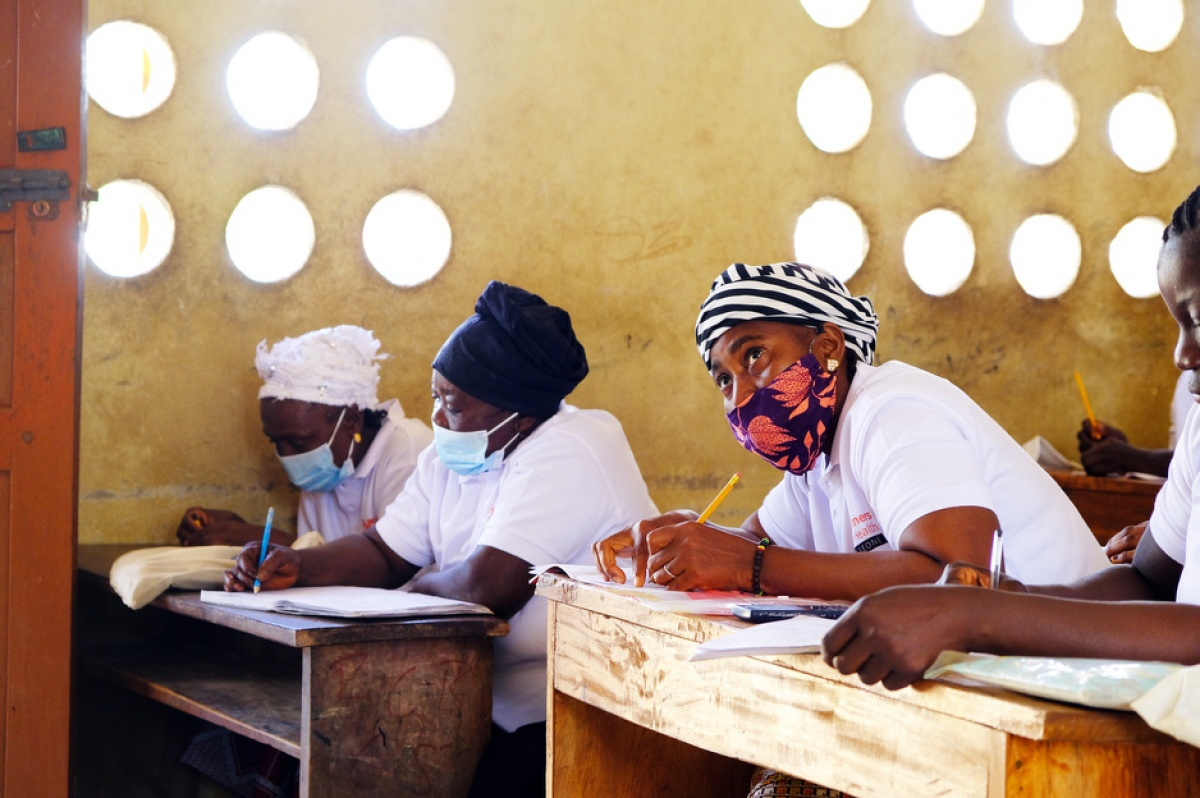 It’s almost 5 p.m. in rural Kono District, Sierra Leone, and the wind is picking up while dark clouds threaten rain. Still, though they have families to get home to, preferably before the downpour begins, 25 students—most in their thirties and forties—remain in the classroom, focused on the math problem on the chalkboard.

The class agrees on a sum, then moves on to copy additional problems for their homework. They’ll complete that assignment before class tomorrow—in between work, taking care of their children, and tending to their homes.

Though most of these students make a living using basic math—selling fruits on the streets of Koidu, managing farmland and harvests—Partners In Health’s adult education program is their first time formally learning addition and subtraction. Last year, it was also their first time learning the alphabet and how to read and write. In fact, the 50 students currently enrolled in the program in Kono, as well as the 200 enrolled in the program in Port Loko District, had never before stepped into a classroom.

In Sierra Leone, illiteracy is the norm—the product of extreme poverty and especially prevalent in rural areas and among women. Across the country, only 43% of people are literate—defined as being able to read and write in either English or Arabic or Mende or Temne, two local languages. And among women, that number drops to 35%.

PIH began offering adult education in Sierra Leone after West Africa’s historic 2014 Ebola outbreak, as survivors in Port Loko, a hotspot of the epidemic, expressed one common goal: to learn how to read. They knew first-hand that illiteracy had not only fueled Ebola’s spread—as people unable to read health messaging were more susceptible to the virus—but it had also exacerbated the poverty that had weakened Sierra Leone’s health system and paved the way for the epidemic to take hold.

PIH’s adult education program was established in Port Loko for these survivors, as part of the shift from responding to Ebola to rebuilding Sierra Leone’s health system. To date, the program has served upwards of 900 students and expanded its reach to all interested community members—more than 80% of whom are women. And its programming has grown beyond basic literacy and numeracy to also include business planning and a financial savings association.

Below, step inside Kono and Port Loko’s adult education classrooms and meet some of their students:

Jeneba Barrie is in her third year of the adult education program in Kono. Growing up with four sisters and one brother in Moyamba District, in southern Sierra Leone, only her brother was sent to school, because it was considered taboo for girls to pursue education. “This did not make us happy,” Jeneba said.

Barrie makes her living by dyeing and selling fabric; she says learning math has helped her better calculate her profits. “I’m so happy for this program,” she added, “because I had never been to school before. If this program wasn’t here, I wouldn’t be able to spell my name or identify the alphabet.”

Barrie has one daughter and has sent her to school, as a firm believer in education for girls. “One day, [a girl] could be Minister or a chancellor,” she said. “They can be important.”

Sherry Bangura, social protection manager for PIH and the founder of the adult education program, sees its units not only as avenues to empower people personally and financially but also as a source of societal development. Based on student feedback over the years, Bangura has introduced additional adult education programs in Port Loko, including a unit dedicated to helping students create formal business plans.

“People see adult education as a lifetime education, a place to build yourself up, take off to the next stage, and achieve economic stability,” Bangura said. “It’s also a platform for people to understand and help develop their communities, especially women, who have long been deprived economically and politically. If we give women the opportunity to understand the role they can have in society and be economically independent, they can contribute meaningfully to ending poverty.”

Bangura notes that for many students, class attendance can be a struggle amid many other competing priorities—and that this tension only grew during the COVID-19 pandemic and its economic impacts. As periodic lockdowns halted business, many learners and their families lost wages that could only be made up—maybe—through extra hours working.

In so doing, the VSLA also aims to ease some of the financial pressures on women who would otherwise have to choose between class and work.

Earlier this year, each student was provided a loan of 400,000 Leones—the equivalent of $40 USD—that they could use to support their livelihoods, from trading to farming. Within a year, they will have to pay back the loan with a minimum contribution of 10,000 Leones—one dollar—per week. They have the option to contribute more as a form of savings; and no matter what, putting a dollar a week into the bank means that every student will come out with 12 more dollars than their initial loan.

26 weeks into the VSLA, after class, the students gathered to count what was in the bank. Between 20 students, there were 5.6 million Leones—or, $560 USD.

Mabinty Sesay, 45, is enrolled in adult education in Port Loko, having never been sent to school as a child, following the death of her mother. She says that as a young girl she “did not feel fine” not going to school, and over the years grew increasingly frustrated as people younger than her achieved success she couldn’t,  without an education. For example, as a volunteer at her local community health center, she dreamed of being promoted to a community health worker—for which literacy is a requirement.

These hardships inspired Sesay to enroll in the program, which has given her a basic education and enabled her to be promoted to community health worker. It also has helped her jumpstart a small business. With academic support in developing a business plan, as well as a loan from the VSLA, Sesay started a business selling fish and has already made enough profit to support her 25-year-old son’s college education.

And her ambitions don’t stop there. Sesay has three more children, ages 15, 10, and 7—all of whom are in school. She says she made sure to send them, “so they wouldn’t be like me.”

“Being uneducated, you suffer,” she explained. “I want to tell PIH tenki, because I wasn’t able to do anything. Now, I can do something with my life.”

Amara Kamara, 61, is in his fourth year of the adult education program in Kono. When asked why he’d never before attended school, he answers in one word: “Poverty.”

Kamara is a farmer and says learning math has helped him better manage his resources, from what to harvest and what to sell to what to save for his next crop.

“I’m so happy because I had no education, and now I know numbers and the alphabet. I can write my name and do calculations, which makes me feel proud,” Kamara said. “I need more—I want to reach a higher level and learn large-scale agriculture.”

He also notes that before he entered the classroom, PIH provided him seeds and farming tools, which helped his farming business enough that he began to make profits. He has used this money to send his four children to school; one of them is even in college now, which Kamara says is an immense source of pride. “My children can teach other people and give back to our community,” he said.

Hannah Charles, 51, has been a traditional birth attendant (TBA) for 31 years. Since 2015, she has worked at PIH-supported Wellbody Clinic, providing maternal health care hand-in-hand with clinicians to make sure women can give birth safely and comfortably. She’s been enrolled in the adult education program in Kono for three years—her first time attending school.

Charles, who grew up in Kono, says her family kept her at home for fear that she would get pregnant if she went to school, based on how many pregnant students they had seen in their community. But her brother did attend school. “I wanted to go,” Charles said, “but I had no support. When my brother talked, everyone listened, because he was educated. That wasn’t the case for me.”

In the wake of Sierra Leone’s civil war, Charles caught a glimpse of the opportunity that could come with an education, when an NGO arrived in Kono with a program to help traditional birth attendants enroll in nursing school. Charles was interested—but because she had never been to school, she was ineligible to participate. “I had the ambition, but not the formal education,” she said.

Learning to read and write through PIH’s adult education program has been immensely helpful for her work—and her confidence.

“I couldn’t even recognize my own name,” Charles said. “When I would attend workshops, or arriving at the front gate every morning at Wellbody, I would need to wait for a colleague to sign me in. Now, I can sign for myself. And I can identify patient names when I am looking at charts. I feel good!”

Take a virtual tour of the Maternal Center of Excellence to see how it will help in the fight to radically reduce maternal mortality in Sierra Leone.