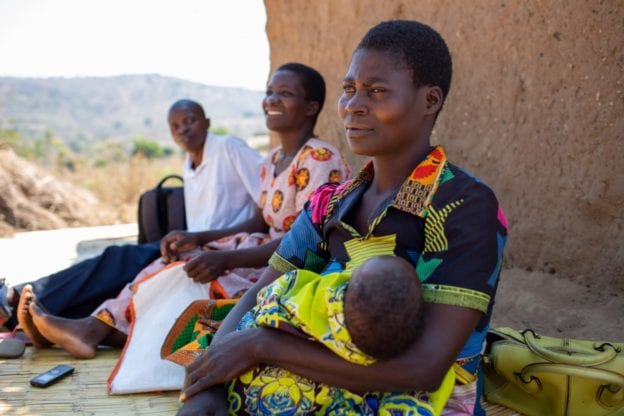 The rural compound where Agnes Paulo has lived since she was born sits atop a ridge that, in the dry season at this time of year, is dusty and brown. Steps away are downward slopes dotted by agricultural fields, including her family’s. The view across the valley is hazy through the heat of a late-September morning, weeks after what many people called a weak harvest.

Dogs and goats amble through the cluster of small houses and outbuildings, beneath clotheslines that stretch from one roof to another. Several young kids play excitedly together, while older kids are off at school. There is a tangible feeling of shared community and extended family in this corner of Chinyani Village in Neno District, Malawi.

Agnes Paulo sits on a mat with her back against a wall of her home, and gazes at the view absent-mindedly. She’s holding her infant son, Ulemu, in her lap. Her expression is somber. Ulemu was born in August, and is her fifth child. The other four—two boys and two girls—are 5 to 14.

Paulo, 35, breastfeeds Ulemu while talking about the struggles facing the entire community, and her immediate family. She’s a single mother and living with HIV. All four of her older children are HIV-negative, but Ulemu had not yet been tested, meaning his status remained unknown.

Preventing mother-to-child transmission of HIV is a vital goal for Partners In Health, which has worked in Neno District since 2007, as a partner to Malawi’s Ministry of Health. Nearly 1 in 10 adults—and more than 70,000 children—are living with HIV across Malawi, an East Africa nation facing some of the world’s most dire challenges in HIV, maternal health, malnutrition and other health areas.

Neno’s arid flatlands and rugged mountains increase the barriers to health care for its roughly 170,000 residents. PIH is working to bridge those gaps, one home at a time, through a network of community outreach and regular, one-on-one visits, like this morning’s checkup with Paulo and Ulemu.

Paulo is one of nearly 8,000 people in Neno who are living with HIV and enrolled in antiretroviral therapy, or ART, programs supported by PIH. Her commitment to treatment dramatically increases Ulemu’s chances of being HIV-negative. Mothers without ART have a significantly higher rate of transmitting HIV to their children—up to 45 percent—than mothers like Paulo, who are able to access and stay dedicated to ART, and have a much lower risk.

Paulo has taken a pill every evening for several years, regularly getting free refills at PIH-supported health facilities, including Neno District Hospital, more than an hour’s walk away on rugged dirt roads.

Additionally, she has a team of PIH staff supporting her. Several members of that team are sitting with Paulo this morning, including Rose Zingwani, a senior community health worker for Abwenzi Pa Za Umoyo, as PIH is known locally. Zingwani is 35, same as Paulo, and lives just down the road.

Zingwani decided to volunteer for the village’s health committee, and then become a community health worker, after seeing the challenges facing the remote Chinyani area. She’s worked with Paulo and her family for more than three years. Zingwani visited frequently in recent months while Paulo was pregnant with Ulemu, to provide education, support, and access to care.

Today’s visit is a regular monthly checkup for Paulo and little Ulemu. Zingwani kneels on the mat beside Paulo while talking about danger signs for infants, such as diarrhea and jaundice, and the importance of breastfeeding, ideally for six months after childbirth. It’s crucial to remain on ART and keep a low viral load during breastfeeding, Zingwani says, as mothers can transmit HIV to newborn children through breastmilk.

Food is her greatest challenge, she says. Paulo feels that there is nothing she can do to improve her family’s food supply. She grows corn when she can on the nearby plots, but fertilizer often is too expensive. This year’s weak harvest has increased the price of corn amid short supplies, as well.

Also joining the visit is Sam Msiska, Malawi coordinator for PIH’s Program on Social and Economic Rights, or POSER. The program provides support including financial, food, home, and education assistance to patients who have needs beyond health care.

Those needs can span a broad range in Neno, where Paulo has seen decades of changing seasons, ebbs and flows. She smiles rarely this morning—even when chatting with Zingwani, a friend and neighbor she’s known for years—indicating times have been harder lately. Chabwera promises to advocate for housing help, and Msiska discusses the potential for immediate food assistance.

Above all, Zingwani emphasized the importance of Paulo maintaining her ART and her regular checkups at the central Neno clinic, to ensure the best possible future for Ulemu and her four older children.

They would have to wait a little to learn Ulemu’s HIV status. Soon after that visit, Zingwani enrolled Ulemu in the Early Infant Diagnosis program at Neno District Hospital’s integrated care clinic. He had his first HIV test there, but results would take a month or more to come back from Blantyre, Malawi’s second-largest city. Henry Makungwa, community health worker manager for PIH in Malawi, said the Early Infant Diagnosis program usually extends over two years, as infants are tested multiple times as they continue breastfeeding.

With the team supporting his mother and family, Ulemu’s chances of living a healthy life are strong, whatever the results of his HIV tests. As the morning’s visit concluded, Paulo stood up, Ulemu still in her arms and wrapped in a bright green, patterned cloth. Zingwani embraced Paulo as good-byes were said, and then Zingwani and the PIH team departed—they were off to the next home.

At PIH we’re committed to building a world where everyone knows their HIV status, has access to lifesaving antiretroviral therapy, and can feel secure in knowing their child will be born HIV-negative.

Your support will help fight dangers faced by families like Agnes’s and make room for more joy.