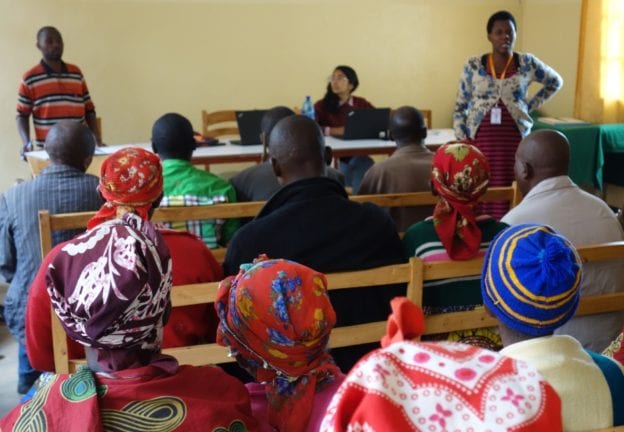 Claver Mugenzi is an outgoing man who favours a bright blue suit that’s as distinctive as his engaging smile. He dresses the part as a leader of his church group in the northern Rwanda community of Kivuye, where he’s also involved in local government. But he wasn’t always so civically active. Struggles with mental illness left Mugenzi and members of his family ostracized by their community, where education and understanding about mental illness had been limited.

“Before, when our family had problems, we were thinking that it was bad spirits that had affected us,” Mugenzi said earlier this year. “After joining treatment at the clinic, we improved and (now) are showing how our improvement has contributed to our welfare. We can advise people who are like how we were, before. When we are here in the group, we can support each other.”

Mugenzi was referring to a self-help group that meets regularly at Kivuye Health Center. The center is supported by Partners In Health, known in Rwanda as Inshuti Mu Buzima. Members of the self-help group meet voluntarily, usually once a month, with shared goals of overcoming mental illness, improving their emotional well-being, and even boosting their finances and resources. Members contribute to collective savings every month and use the pooled money to buy livestock, land for farming, and other agricultural needs, or to issue small loans to members.

The Kivuye group is one of 17 self-help groups meeting at health centers across northern Rwanda’s Burera District. The groups total more than 600 members, including people with mental illness and their families. PIH supports the groups in collaboration with Rwanda’s Ministry of Health, as part of a larger effort to bring mental health care directly to communities, integrate mental health with primary care, decrease stigma, and increase local education and empowerment.

The need for a greater understanding of mental health is global. The World Health Organization says depression is the world’s leading cause of disability, affecting more than 300 million people. The WHO also estimates that in low- and middle-income countries, up to 85 percent of people with mental illness do not receive treatment—meaning millions of people suffering from psychosis, depression, and other illnesses have no access to care that could change their lives.

PIH is responding to this growing crisis and, in 2018 alone, supported mental health care for 6,800 people across 10 countries. Rwanda was one of the first countries in which PIH launched a mental health program. The 2009 launch came 15 years after the country’s devastating spring of 1994, when the genocide against the Tutsi led to the deaths of 1 million people over 100 days, and displaced millions more. The genocide decimated the country’s health system, and caused severe, lasting trauma among citizens who had virtually nowhere to turn for mental health care.

Gains were incremental as the country rebuilt its health system, but for years, mental health care was available only at district hospitals, far away from many people with great need for care but limited means for travel.

PIH’s collaborations with the Ministry of Health have spurred mentoring programs, mental health training for primary care nurses, and more, with a focus on bringing mental health care directly to communities. Education sessions and self-help groups began expanding to health centers in 2015. PIH is working closely with the ministry to scale mental health programs and mentoring across Rwanda.

PIH’s support for the self-help groups extends beyond mental health care. In conjunction with PIH’s Program on Social and Economic Rights, or POSER, group members receive training in agriculture and other income-generating activities, along with material donations such as potato seeds, fertilizer, irrigation pumps, fungicide, and livestock.

In Mugenzi’s community of Kivuye, the self-help group started a livestock project and used their collective savings to buy rabbits, chickens, and 12 sheep, which they distributed among members. PIH donated an additional 20 sheep for the group. Members who didn’t get a sheep in the initial round will get the first newborn lambs.

Mugenzi is realizing his potential, as well.

“I have really improved now,” he said. “Even in local government, I have some responsibility. Even in my church, I am among the leaders. Stigma has been reduced. Before, I was not able to do anything, and my knowledge was like zero percent. I was not among the church leaders. No one was caring for me, or thinking I could be a leader.”

“The first task was to help people understand mental illness,” she said. “If you know the illness you have, then you can make a plan, and follow up in the medical system…As the main objective was to improve people’s health and promote their reintegration into communities, we emphasized the role of family members and caregivers in treatment, and ultimately, in fighting stigma.”

Dorcas has led mental health outreach efforts in Burera District for years, visiting people in their homes, health centers, and communities. She and Dr. Nina Sreshta, Harvard University’s Dr. Mario Pagenel Fellow in Global Mental Health Delivery, visited six self-help groups in January and February to assess their growth and impacts. Dorcas said development of the groups started slowly, but has grown to include strong economic components built through collaboration and shared resources.

“By working with nurses and social workers at health centers, we mobilized patients and families,” Dorcas said. “Most groups started saving by contributing 100 Rwandan francs ($0.15 CAD) every month. Many groups have increased their savings, and some groups have members contributing up to 1000 RWF ($1.50 CAD) each, every month.”

Like the Kivuye group, the self-help group at Rwerere Health Center has used its shared savings to buy livestock. Rwerere is about 25 miles west of Kivuye. One sheep in the area costs about 30,000 RWF, or about $44. The Rwerere group bought 21 of them, and PIH donated 20 more. Members use the manure for natural fertilizer, and sell lambs in local markets for extra income. Building on success from that project, the group then bought 13 chickens, and with a loan were able to rent a small coop for them. Members plan to sell eggs to generate additional income for the self-help group.

As of February, the 17 self-help groups in Burera District had saved nearly 375,000 RWF, or more than $550, with an additional 930,000 RWF—more than $1,370—available for loans to members. Some families have used the money to buy health insurance or rent land for farming.

Sreshta said the visible, tangible successes for people living with mental illness—people who neighbors previously had shunned—can have a dynamic impact on perceptions.

“People with mental illness everywhere, not just in Rwanda, are vulnerable to social stigmatization and isolation,” Sreshta said. “These groups are very inspiring to see. Members develop camaraderie and a sense of agency by supporting each other and intentionally saving money for particular goals. Members talk about how these groups have reduced their feelings of isolation and hopelessness, and have contributed to boosting their confidence and resilience.”

Emmanuel Hakizuwera, a member of the self-help group at Kirambo Health Center, took a bank loan in his name to help the group buy cows, using his own land as collateral. Kirambo is just a few miles west of Rwerere. Hakizuwera and his wife decided to help the Kirambo group because of their daughter, who suffers from epilepsy. He said the self-help group has provided not only education about mental health, but also a better understanding of the importance of treatment, medicine, and follow-up appointments for their daughter. Her condition has improved significantly during Hakizuwera’s participation in the group, and as she receives regular checkups at the health center.

Hakizuwera and his wife have improved their finances with the purchase of a cow for his family, as part of the loan to the group. They get natural fertilizer for their fields and milk for their children. The group also is growing potatoes on the land Hakizuwera used as collateral.

He said applying for the loan was about more than money.

“My neighbour asked why I chose to offer land and my documents for the loan,” Hakizuwera said. “I wanted to show my neighbours and the community that there is no need to discriminate, including against people with mental illness. I wanted to also show that we love each other and it is easy to provide and to share.”

See how PIH is ramping up mental health care in Lesotho and other sites around the world by training more providers to incorporate mental health into primary care and improving diagnosis and treatment for mental illnesses.