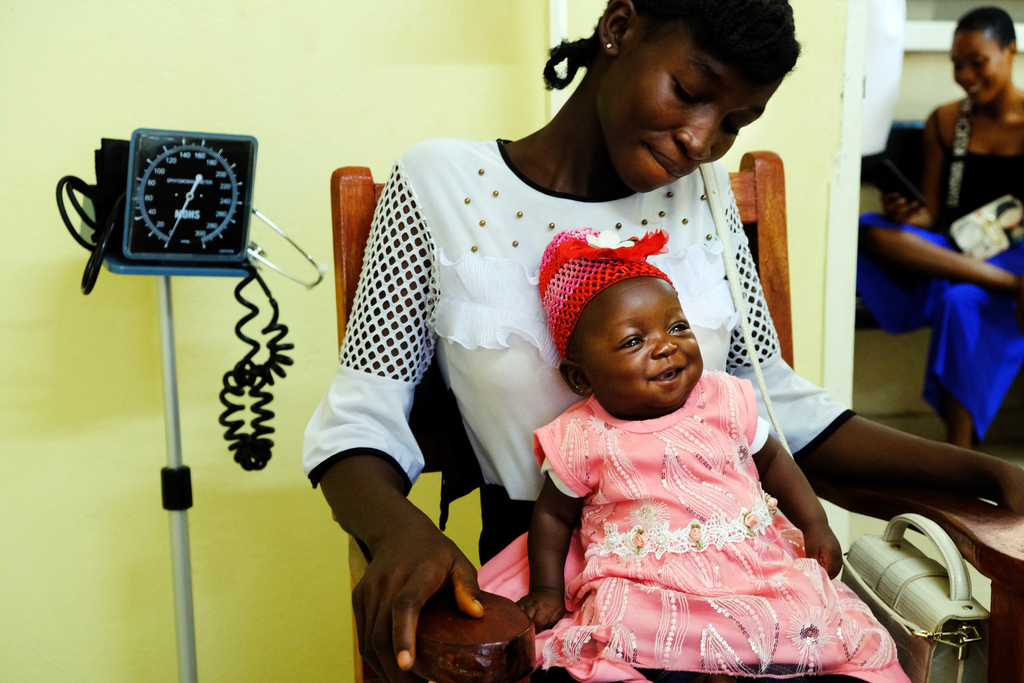 New facility will be hub for expanded care, specialized services, and clinical training

The morning of April 23 marked a turning point for women and their families in Kono District, Sierra Leone, as Partners In Health (PIH) and Sierra Leone’s Ministry of Health & Sanitation officially broke ground on the Maternal Center of Excellence (MCOE).

A state-of-the-art teaching hospital dedicated to women and children’s health, the MCOE now enters its construction phase on the grounds of PIH-supported Koidu Government Hospital, where PIH and the Sierra Leonean government have focused their efforts on radically reducing maternal, child, and neonatal mortality in Kono and in the country at large.

Sierra Leone is one of the most dangerous places in the world to give birth: Women face a 1 in 20 lifetime risk of dying in pregnancy or childbirth—compared to a 1 in 6,100 chance in Canada.

What’s more, the facility will be a response to the dire shortage of trained clinicians in Sierra Leone, where there is currently no option to specialize in such areas as obstetrics, gynecology, neonatology, or pediatrics. Specialized medical training programs—and infrastructure like simulation labs, lecture halls, and student housing—will provide never-before-available clinical education opportunities to the next generation of doctors, nurses, midwives, and other equity-minded health care workers.

The MCOE’s construction is estimated to take two years and will be completed with PIH’s longtime partner, Build Health International. Once fully operational, the facility is projected to increase facility-based deliveries by 121%, multiply by five-fold family planning visits, and reduce the rate of still births to under 2% in Kono District.

And beyond measured impact, the MCOE will serve as a model health facility, provide a blueprint for future investments in women and children’s health, and stand as a global testament to women’s rights as human rights.

“It will be a place where women will feel treasured,” said Isata Dumbuya, nurse-midwife and manager of PIH’s maternal and child health programming in Sierra Leone. “For women to feel that they count, where they will come and say, ‘This was done because of me, because I matter. I am worthy, and I’ve been treated with the highest level of dignity.’”

For Dumbuya and her colleagues in Sierra Leone, the groundbreaking is a historic moment for PIH and for the country—and a step toward a dream come true.

“In 2017, the first conversations started in Kono between PIH, the district health management team, and Koidu Government Hospital administration about the most impactful ways we could work together to reduce maternal and child mortality,” said Jon Lascher, executive director of PIH in Sierra Leone. “Quickly, the strategy came to include not only excellent clinical services, but a true training institution, linked to Sierra Leone’s universities and universities around the world. And soon the idea was born for the Maternal Center of Excellence.

“The MCOE is and will be founded on all of the critical investments we’ve made, and the trust we’ve built, in communities, clinics, hospitals, and government buildings across the country,” he continued. “It promises a truly bright future for women and children’s health. The people of Sierra Leone deserve nothing less.”

Take a virtual tour of the Maternal Center of Excellence to see how it will help in the fight to radically reduce maternal mortality in Sierra Leone.

DONATE NOW
Read the detailed report of the four-pronged strategy to save lives in the vulnerable communities we serve, and support global efforts to contain the spread of COVID-19.
Read Strategy
Categories: Featured Stories
Tags: Child HealthMaternal HealthSierra LeoneWomen's Health