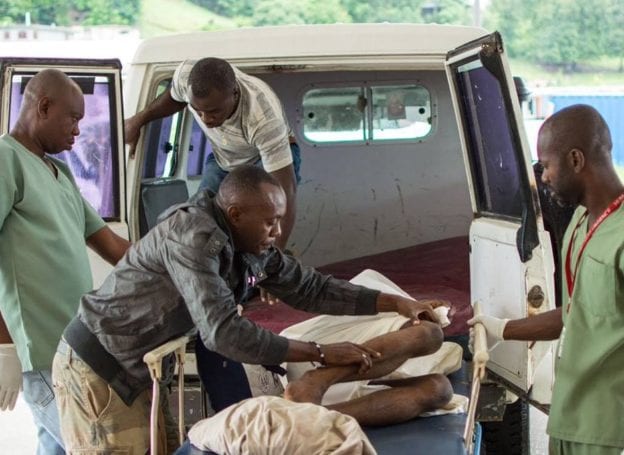 Partners In Health leaders in Haiti say staff have been held at gunpoint at roadblocks and a PIH vehicle has been stolen by an armed gang as nurses and doctors face “overwhelming challenges” to reach health facilities, where fuel for generators and crucial medicines are running low as protests, violence and civil unrest across the island nation continue into their third week.

All PIH sites remain open and operating during the crisis.

Loune Viaud is executive director for Zanmi Lasante, as PIH is known in Haiti. She’s working closely with teams on the ground and provided updates on the increasingly dire conditions Thursday. PIH supports 12 health facilities and hospitals across Haiti’s Central Plateau and lower Artibonite, serving more than 1.2 million people. Medical staff at those facilities have seen “dozens of gunshot victims” and patients with severe lacerations.

Many PIH staff “have had to walk through barriers of burning tires and protesters, sometimes having rocks thrown at them, even being held at gunpoint” amid the protests, Viaud said.

“To avoid having our teams venture out of the facilities, we need to ensure that we have food, clean water and a shelter, to keep them safe. Additional security will need to be implemented at the facilities,” she said.

The Hospital of the State University of Haiti, in the capital of Port-au-Prince, is Haiti’s largest public hospital and has been closed during the protests. Its closure means the PIH-supported, 300-bed University Hospital of Mirebalais, about 30 miles north of the capital, is Haiti’s only facility of its size currently operating.

“We need to ensure that services for our operating rooms, maternity wards and emergency rooms are well staffed and supplied,” Viaud said. “In areas where we are able to get around the protests, reaching our patients remains a challenge, as there are only four working ambulances for the 12 sites.”

Viaud said PIH medical staff were “stopped by an armed gang” Wednesday in the lower Artibonite, where their PIH vehicle was stolen. None of the staff members were injured physically in the jarring incident.

At least eight people have died across Haiti since Feb. 7 in violent clashes between police and demonstrators, according to the Miami Herald. Schools, businesses, and public transportation have mostly remained closed in the wake of the political and economic crisis largely sparked by skyrocketing prices, a rapidly devalued currency, and chronic fuel shortages. Blockades prevent travel, and residents are reluctant to leave their homes.

Temporary reprieves in recent days have not enabled medical staff to catch up with shortages.

“While there have been windows of opportunity to restock the shelves of our 12 health facilities and hospitals, fuel for generators continues to be a major challenge,” Viaud said. “And when we can secure fuel, it is often as much as six times the price of what it cost just a few weeks ago. At some sites where there is electricity, the grid has been down for days, placing an even heavier burden on generators that are already struggling.”

The crisis is not limited to the capital and large cities.

“We continue to see a number of areas where we work—including Thomonde, Mirebalais, Verrettes and Petit Riviere—facing constant obstacles,” she said. “This week, we have seen protests erupt along the border of the Dominican Republic and Haiti where we support a hospital at Belladere, one of the only facilities for miles in an area often forgotten by many donors and organizations.”

Shortages of medicines are compounding the problem—as are concerns that many people needing care, especially pregnant women, may be unable to reach health facilities because of roadblocks and other obstacles.

“We’ve seen a decline in deliveries at our facilities, which is very concerning given that such a high population of Haitian women give birth at home, with no trained medical personnel,” Viaud said. “Roughly 30 percent of women in Haiti require emergency cesarean sections due to complications.”