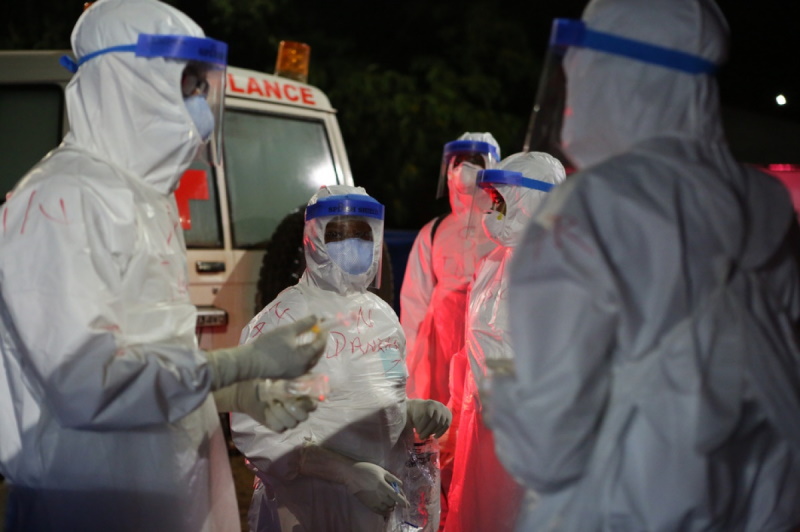 Six years ago, Partners In Health began its work in Liberia and Sierra Leone at the height of West Africa’s historic Ebola outbreak. PIH heeded the call of governments in Liberia and Sierra Leone to not only respond to the rapid and deadly spread of Ebola, but to make open-ended commitments to stay and collaboratively build stronger health systems for the long-term. Such an approach is, we have learned time and again over 35 years and across continents, the best way to mitigate and minimize an epidemic’s impact, and to prevent needless deaths from other diseases that have known treatments—but that have been long denied to impoverished communities.

Last week, health officials in Guinea confirmed the reemergence of Ebola in the country—putting the entire region, including our patients and teams in Sierra Leone and Liberia, at risk.

We stand in solidarity with the government and people of Guinea as they rush to care for those who have fallen ill and to ensure the virus does not spread further. And in Sierra Leone and Liberia—both of which share a border with Guinea—we are working with local and national health officials to support preparedness efforts, including thorough screening at entry points, contact tracing, and updating treatment protocols with two new Ebola drugs developed since the last outbreak. In the communities and health facilities we directly support, we’re mobilizing our community health workers, taking stock of PPE and other necessary supplies, and developing new triage and isolation protocols.

As of this writing, Ebola has not yet been confirmed in Liberia or Sierra Leone. Still, we can’t be complacent.

We’re preparing for a worst-case scenario, in which the virus once again takes hold of the region—on top of the ongoing COVID-19 pandemic and West Africa’s second wave of that virus. With porous borders between Liberia, Sierra Leone, and Guinea, spread of Ebola may be a question of time.

There are many reasons to feel optimistic. Since the last outbreak, Sierra Leone and Liberia have national structures in place to prepare for and handle health crises. Ebola is better understood, and is no longer seen as an inevitable death sentence: there are new treatments and even a vaccine, recently stockpiled by the World Health Organization. And PIH-supported hospitals and clinics in both Sierra Leone and Liberia are prepared for Ebola and COVID-19 in ways communities could only dream of in 2014. Our number one priority if and when Ebola arrives to the communities we serve is keeping routine health services on course. By ensuring PIH supported facilities remain open, we can help ensure no one dies from lack of availability of general health services for pregnancy, malaria, diabetes, or any other non-Ebola ailment.

Our optimism, however, is accompanied by fear, indignation, and impatience. It is reassuring, and a source of pride, to be working in once direly under-resourced public health facilities now considered the best in the countries; these hospitals and clinics are among the only government health facilities in the region that have all core clinical services – including surgery, pediatrics, internal medicine, obstetrics, mental health, and non-communicable diseases – alongside 24/7 electricity, running water, digital x-ray machines, blood banks, oxygen production plants, isolation rooms and all other resources necessary for comprehensive, dignified health care.

We are proud of the work we have done, but in no way should these successes be seen as innovation. They are the exact things we would expect in a Canadian or U.S. hospital, and what we believe every person deserves wherever they may live.

And while we are confident that the Ebola response will be more robust than it was in 2014, for our staff and patients, this period is difficult, even in its potentiality. There is not a single Liberian or Sierra Leonean family that was not impacted by the previous epidemic; the memories are not distant. We are committed to providing extra support and accompaniment to one another. We recognize and are grateful for the psychosocial care we provide alongside our MOH partner hospitals and clinics to support our communities and patients facing resurfacing trauma.

This burgeoning epidemic—again, emerging on top of another infectious disease outbreak—doesn’t just bring back the pain of personal memories. It also serves as a reminder of the unjust reality we are working together to transform each day.

Consistently, and not coincidentally, it is the poor who suffer most, and who are last in line to receive the benefits of modern medicine and scientific advancement.

While much has changed in six years, much hasn’t; the health systems in Liberia and Sierra Leone remain fragile, and West Africa remains incredibly vulnerable to this threat of another round of Ebola. We stand at the ready, but the hard truth is: Until the attainable goal of universal health care is achieved for people living in Guinea, Sierra Leone, Liberia, and all other impoverished countries, we can expect more needless suffering and death at the hands of treatable and preventable diseases.

See how the PIH Sierra Leone team has been working to respond to COVID-19.