Q&A: Malaria Vaccine ‘Is a Powerful Tool’ to Save Lives 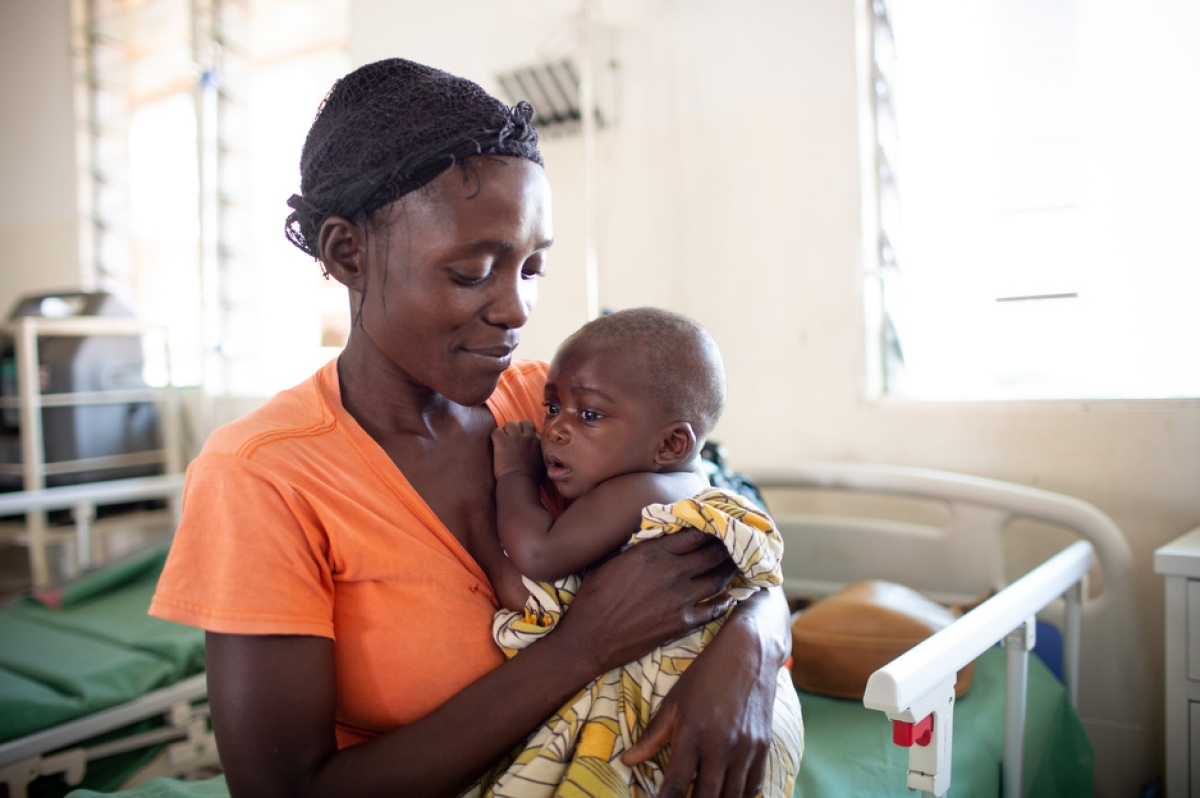 A vaccine can change the course of global health—and not just amid COVID-19.

After 100 years of research and clinical trials, the first-ever malaria vaccine was approved by the World Health Organization on October 7, a historic moment that marked a turning point in the longstanding fight to end one of the world’s deadliest diseases.

Malaria kills about 500,000 people each year, with children in Africa accounting for around half of those deaths. The disease is highly prevalent in Rwanda, Liberia, Sierra Leone, and Malawi—countries where Partners In Health works and where community health workers can do little more than hand out bed nets as a preventative measure.

Even as the vaccine ushers in a new era for millions of people worldwide, questions remain about its cost and accessibility, especially for those who need it most.

To explore these questions and others, PIH sat down with our Africa Regional Policy and Partnerships Advisor Dr. Evrard Nahimana for his insights on this scientific breakthrough and how it could change the course of global health.

A vaccine for malaria has been a long time coming—100 years, to be exact. How does this historic moment resonate with you, on a professional and personal level?

Malaria is a disease I have grown up with. I had a couple of episodes of malaria during my childhood and during my clinical years. I also cared for many patients with severe malaria, particularly children under 5 and pregnant women. Some of them, unfortunately, died from the disease. The burden of malaria goes beyond the number of patients affected and/or deaths related. Malaria has a huge negative impact on a family’s finances and a country’s economy.

Clinical trials on the malaria vaccine started decades ago. I had the opportunity to meet researchers directly involved in the trials in Kenya and Tanzania. And so hearing about this scientific milestone in my lifetime is so exciting. A vaccine is and could be a powerful tool in the fight against malaria.

However, the fight is far from over. Malaria is a “poverty disease” and so, only relying on drug/vaccine/commodities-based interventions to control and eliminate the disease is a big mistake. Its elimination should go hand-in-hand with poverty reduction strategies, including improving housing and building strong and equitable health systems.

The story of this vaccine is quite different from others; it was developed in Africa, by African scientists, which is major. Can we talk about the development of this vaccine—what makes it unique and what lessons can we learn from it?

Over the past century, clinical trials in infectious diseases have been led by researchers and agencies from western countries. However, the research and development of malaria vaccines present a different scenario. African scientists have been closely involved and leading clinical trials for the malaria vaccine, including the one that led to RTS,S (the new malaria vaccine), which was recently approved by the World Health Organization. Although the process involved a collaboration with a British drug manufacturer, with funding from the United States and the United Kingdom, scientists born, raised, and trained in Africa led the clinical trial that occurred in Ghana, Malawi, and Kenya.

This means a lot for the scientific community across Africa. For the scientists involved in the trial, it is about fighting a disease that is killing them, their families, and the communities they live in. But most importantly, when it comes to scale, you are not relying on data from studies conducted elsewhere on other populations by other researchers. This is also a message of hope for other scientists from Africa involved in similar trials—their work may lead to even more efficacious drugs and vaccines.

The vaccine has modest efficacy—30% among children under five—and requires a complex regimen of doses—4 shots. What do you make of this, from a clinical perspective?

It is true that the vaccine has a modest efficacy of 30%. However, the evidence from a recent study shows that the vaccine RTS,S combined with other existing methods (use of antimalarial drugs and bed nets) could reduce under 5 mortality and hospitalization up to 70%. Also, 30% of efficacy might seem modest, but applying that to the millions of children affected by malaria every day could save so many lives.

Across most African countries, vaccination coverage among children was high (around 90%) before COVID-19. Countries like Rwanda achieved 98% coverage for the overall complete basic childhood vaccination among children aged 12–23 months. Even for countries with low coverage, the issue is less hesitancy but more related to accessibility due to structural barriers. I am confident that adding a malaria vaccine into routine immunizations for children will be met with a lot of enthusiasm and the uptake will be high. Producing the vaccine at a large scale and making it available to the people who need it most will be the critical next steps.

Now that the vaccine has been approved, what would it take to make it free and accessible to the world’s population, especially those who need it most?

Developing a lifesaving product (vaccine or drug) is one important step; ensuring large production, fair distribution, and administration to everyone, particularly those who need it most, is challenging—but possible. Recent history has taught us, through so many examples (HIV, Ebola, COVID-19), that without global collaboration to fund the production, distribution, and administration of vaccines, we could be waiting years and even decades before those vaccines, already approved, are available to those who need them most. It would be a tragic, global, moral failure if that happens again with the malaria vaccine.

The COVID-19 Vaccines Global Access (COVAX) facility was established as a mechanism to support low- and middle-income countries in accessing vaccines doses for their populations. We need a similar mechanism for the malaria vaccine. And the right time to do it was yesterday! A study shows that countries with moderate to high malaria transmission will need about 110 million doses per year by 2030. I don’t know how much this will cost, but it is nothing compared to the lives of children we can save. This is a call for governments, multilateral agencies, donors, philanthropists, and the entire global health community to work together to mobilize resources for universal access to malaria vaccines. Again, it should be clear that a vaccine is not a magic bullet to control malaria. Vaccination should be integrated into broader strategies for health systems strengthening and economic and human development.

What does this vaccine mean for the sites where PIH works and where malaria has long been prevalent?

Malaria kills half a million people every year and the majority of them (more than 90%) live across the African continent. Access to malaria vaccines will help save lives and prevent the hospitalization of millions of people. It is good news for people living in malaria-endemic areas, including countries supported by PIH.

Countries with weak health systems will struggle to distribute and administer the vaccine once it is available, and its impact on malaria control will be very limited. Improving supply chain systems will be essential for effective vaccine distribution. With PIH’s efforts over the past two decades to build a robust, resilient health system through our 5S model (staff, stuff, space, systems, and social support), the sites we support are well-positioned to embark into the effective distribution of the malaria vaccine, and PIH will continue to support governments with that.

Any insights on what the vaccine could mean for the Global Fund—the international partnership between governments, civil society, and the private sector to fight malaria, HIV, and TB? Do you think the Fund will be used to buy vaccines? Will it be as needed as before if this vaccine proves to be revolutionary?

The Global Fund has been essential in the fight against malaria, TB, and HIV. In some countries, the Fund contributed to building a horizontal health system. It has been supporting the procurement of commodities, including malaria drugs. It is not clear what the Fund’s strategy will be toward procuring malaria vaccines and facilitating distribution and administration. But that’s what we hope to see.

The WHO endorsement of this vaccine is a huge win in the long-running fight against malaria, but that fight is far from over. What do you think is the next chapter in the global push to end malaria? What must the global health community do now?

Malaria is a good example of a “poverty disease.” Over the past decades, most of the strategies to control it have been focusing on commodities (bed nets, drugs, etc.) which are effective but limited in the long run.

Shifting our methodology by embedding these existing tools and new ones into a broader development agenda, including proper housing and improving health systems, will help to eliminate the disease. And resource mobilization for mass production of the vaccine—including building capacity within developing countries to manufacture the vaccines for themselves—should happen as soon as possible.

No one is safe from COVID-19 until everyone is safe. By supporting the TRIPS waiver, Canada can contribute to the immediate acceleration of global vaccine manufacturing and distribution, which would save countless lives and reinforce Canada’s commitment to essential health services as a human right.