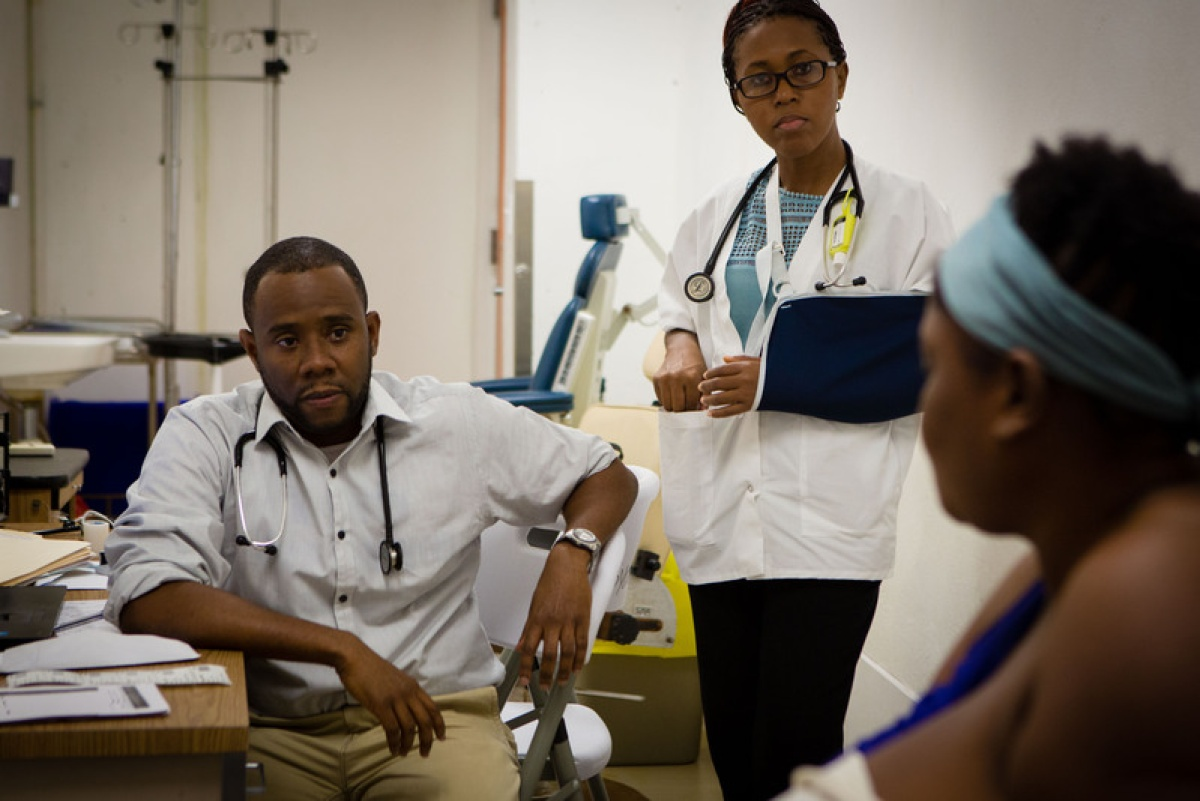 Earlier detection, diagnosis, and treatment can save lives

In Haiti, breast cancer is the most common form of the disease among women, as it is worldwide. But there’s a key difference: a higher percentage of women will die from breast cancer in the Caribbean nation than in most other countries.

While many factors may contribute to this, including that Haitian patients are often diagnosed at later stages, there is limited research detailing how these factors play a role in Haiti. To gain a better understanding of the situation and to assess care delivered at Hôpital Universitaire de Mirebalais (HUM), researchers from Zanmi Lasante — Partners In Health’s sister organization in Haiti — alongside co-collaborators from several institutions in the United States, conducted a comprehensive assessment.

Their findings, which were published last year in The Oncologist, include many important takeaways, with the most encouraging being that basic breast cancer treatment can lead to better outcomes in Haiti, especially when patients are diagnosed and treated early.

“We wanted to highlight the fact that we can treat cancer in Haiti. It’s feasible but you need the right resources,” says Dr. Ruth Damuse, clinical care coordinator in HUM’s oncology department and co-author of the study.

Their research is the first published assessment of cancer care at HUM since the program (which began in Cange in 2011) moved to the hospital in 2013, the same year the 350-bed, world-class teaching facility opened its doors. HUM has the country’s only public oncology center capable of diagnosing and caring for patients and offering both therapeutic and surgical treatments.

As the oncology department at HUM becomes more widely known, patients—80% of whom have breast cancer—have come from all around the country for care.

The study included data from 341 female patients with nonmetastatic breast cancer who started treatment at HUM from 2012-2016. Damuse and her colleagues measured “event-free survival” in patients, meaning how much time elapsed before the patient had either a recurrence of cancer, a new tumor, disease progression, or death from any cause. They also reviewed the type of care provided by HUM, taking into consideration what treatments were administered, the time it took for patients to receive that treatment, and the treatment’s duration.

Of those patients, 81.5% received curative surgery or removal of the breast where a tumor was found. (Breast-conserving surgery is not performed in Haiti at this time since it requires patients to receive radiation therapy, which is not available in the country.) Pre- and post-surgical therapies such as chemotherapy were provided to shrink the tumor, and some patients also received further chemotherapy and hormonal therapy after surgery. During the follow-up period, 28 patients died, 77 had disease recurrence, and 10 experienced progression of the disease.

Of the patients that had up to 3 years of follow-up, over 60% were alive and free of disease.

Most patients tended to have more advanced disease at the time of diagnosis—a rate that was even higher than previous studies conducted across Haiti had indicated. The authors believe one reason was the lack of nationwide breast cancer early detection programs. And many of the patients appeared to get breast cancer at an earlier age than patients in the U.S., which previous studies have also found.

Lead author Dr. Temidayo Fadelu, PIH’s oncology advisor, says an explanation is elusive and needs further research. “You have an overall younger population, and then you have the possibility that the biology of cancer might be different in a population of African descent. Overlaying that is likely referral bias.”

In other words, he wonders: “Is it possible that older patients are having cancer but not making their way to our facility?”

The study helped researchers pinpoint several important obstacles to care that will be useful in identifying areas of improvement. For example, researchers found that many patients experience delays when they go to other facilities. When patients wait until their disease has advanced, it becomes more difficult to treat their cancer and more likely that they will have a negative outcome.

Damuse said that patients are oftentimes resistant to seeking care for several reasons: stigma related to breast cancer, fear that a mastectomy will make them less feminine, or because they believe breast cancer is a death sentence. In some cases, patients are skeptical of modern treatments. And in rural areas, she says, people tend to be unfamiliar with hair loss associated with chemotherapy or have never heard of a breast being removed to save a patient’s life.

Diagnosis is also challenging. For most of the study period, there was very limited access to pathology services and patient samples had to be sent to the U.S. for a diagnosis. In Haiti, clinicians evaluate the extent of the cancer using a chest x-ray and ultrasounds, but other tests common in higher-income countries such as CT scans, nuclear studies, MRI, and PET scan machines are not readily available.

Since conducting the study, the team has worked hard to improve the scheduling system and follow up with patients, with the goal of making sure patients continue treatment.

Dr. Joarly Lormil, an oncology care coordinator at HUM, has seen thousands of patients in his practice. He estimates that, at the moment, about 150 patients are actively receiving chemotherapy at HUM. Lormil treats patients with all kinds of cancers, but the majority are patients with breast cancer. He has seen firsthand how harmful it can be when patients delay treatment.

Lormil recalls seeing a patient in her early 30s who was diagnosed with breast cancer and was a candidate for surgery. However, she was newly married and reluctant to have her breast removed. Nearly a year later, “we finally convinced her to receive the care,” he says. But then the earthquake struck, further delaying her surgery. Two more months passed. Finally, she had the surgery and is doing well now, but is at higher risk for further complications and recurrence of her disease.

As the oncology team continues to increase its capacity to care for and treat patients in Haiti, increasing its staff and eventually bringing in new technology and treatments will improve patient outcomes, but all this comes at a significant cost.

Nonetheless, Lormil is optimistic: “Most men and women with breast cancer can get cancer care, including palliative care.”

Take the recent example of a nurse working in HUM’s maternal health unit, who discovered she had breast cancer. When she first got treatment, she felt ill from chemotherapy but is doing better now. She is free from cancer, says Lormil, adding that the nurse has been sharing her experience with her co-workers and patients.

“She is the embodiment that, if you receive care early,” he says, “you can be free of cancer.”.

The research team identified gaps and areas for improvement, such as increasing the percentage of patients who receive surgery, the proportion of patients who get estrogen receptor testing, and the use of chemotherapies before and after surgery. The team also hopes to reduce the number of patients who fail to follow up and decrease system delays for patients.

As a result of the study, HUM staff are now working with local partners on initiatives to teach women how to perform self-breast exams. Clinicians are also providing information and support to patients with the goal of overcoming the stigma around cancer care. Further studies are recommended to better understand why there are high rates of breast cancer in Haiti, and why Haitian women seem to get breast cancer at a younger age.

The study’s findings have already helped raise the standard of care for breast cancer patients at HUM. For example, the hospital now has a full-time surgeon integrated into the oncology team and dedicated to providing expedited access to surgery.

Damuse says the study has given the team confidence and proven the success of HUM’s oncological care model, which can serve as a blueprint for cancer care across Haiti and other developing countries.

“The study,” she says, “shows that we can improve cancer care in Haiti going forward.”

Although roughly 70% of cancer deaths occur in low- and middle-income countries, they receive only 5% of global cancer resources. See how PIH Canada is working to change this and help patients with cancer and other non-communicable diseases receive the care they need.