Rwanda Team Trains Next Generation of Oncology Nurses in Liberia 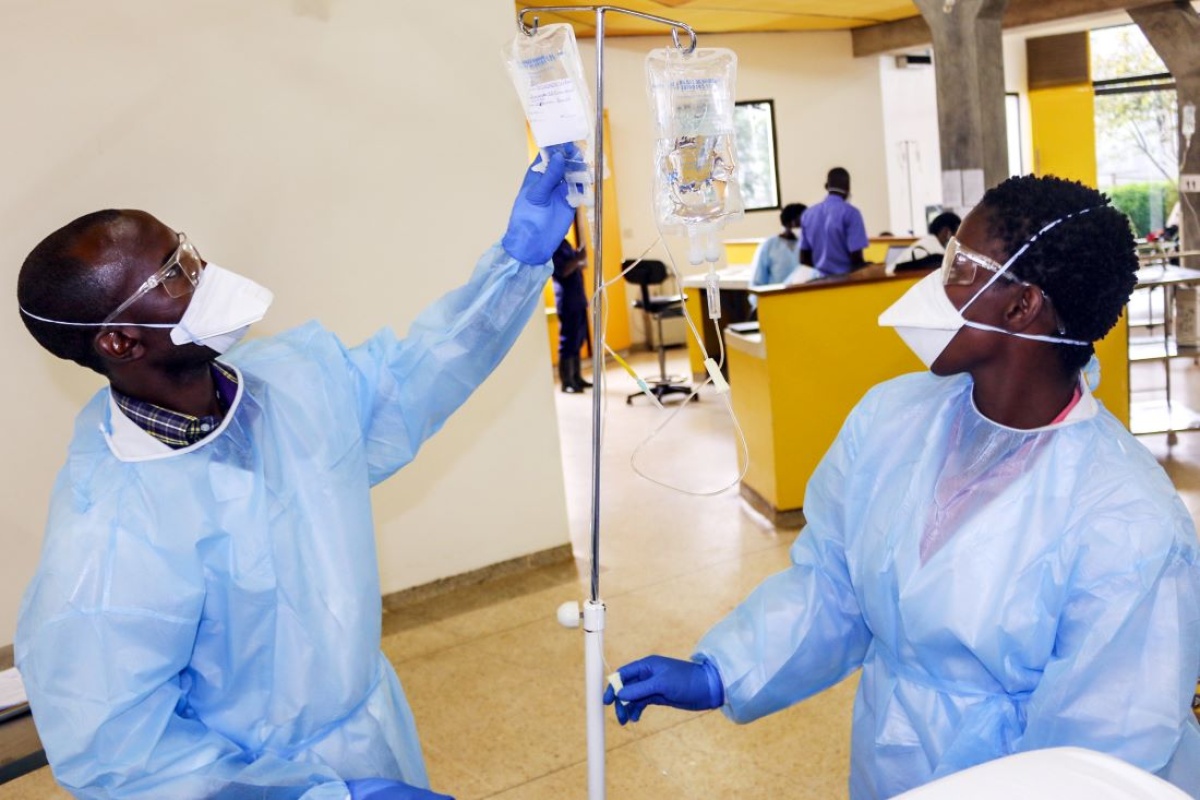 In 2014, when the Ebola outbreak was declared in Liberia and other West African countries, people were warned that the disease was devouring everything in its path.  For many, it seemed like madness to stand against such a lethal virus. But not for Julius D. N. Kpoeh, who was then working as a transport nurse with African Humanitarian Action in Nimbe, one of the 15 counties of Liberia.

Guided by the sense of duty, Kpoeh joined other frontline health workers who were determined to do everything to stop the virus’s deadly spread. For months, he helped transport patients with Ebola symptoms in ambulances from their villages to treatment centers for emergency care.

“I was just performing my duty,” he says. “I had no other choice; something had to be done.”

Kpoeh again feels compelled to respond, but this time in tending to cancer patients arriving at facilities supported by Partners In Health Liberia, where he currently works as the palliative care coordinator. He was drawn to PIH’s mission to strengthen and rebuild Liberia’s health systems, using an approach that had proven successful in countries like Haiti and Rwanda.

According to the WHO data, poor countries endure a bigger burden of cancer, with approximately 70% of deaths from cancer occurring in low- and middle-income countries.

In Liberia, 3,552 new cases of cancer and 2,603 deaths occurred in 2020. And the numbers are expected to rise because of the aging and growth of population.

In his role, Kpoeh helps cancer patients manage stress and pain, but knows more can be done.

“We have cancer patients who were diagnosed earlier and have a chance to be treated and survive,” Kpoeh says. “But in Liberia, we don’t have an advanced cancer treatment center and skilled oncology nurses to support in the treatment of patients.” The critical shortage of health care workers in sub-Saharan Africa has meant that nurses are taking on additional roles in busy hospitals, but often lack specialized training to provide quality care.

Inshuti Mu Buzima, as PIH is known in Rwanda, has made efforts to nurture medical professionals who will become major players in the next generation through training and mentorship programs, in collaboration with the Rwanda Ministry of Health and Dana-Farber Cancer Institute.

Recognizing this gap in cancer care training, Partners In Health Liberia and Inshuti Mu Buzima worked together to arrange training for Kpoeh and Dehcontee M. Hardy, another nurse working in the pediatric department and part of the palliative care team at PIH-supported J.J. Dossen Hospital in Maryland County, Liberia.

Since its opening, The Butaro District Hospital has been greatly successful in delivering robust cancer treatment and care to patients from not only Rwanda, but across Africa. From 2012 to 2019, the hospital admitted 11,107 patients diagnosed with cancer, with the number expected to exceed 13,000 in 2021.

Plans are in the works to expand the facility so that it will eventually serve as the district’s first teaching hospital.

“In order to deliver holistic cancer care, a multidisciplinary team approach that involves trained physicians, nurses, and social workers is a must,” says Jean Bosco Bigirimana, Inshuti Mu Buzima’s oncology program manager. “Since 2012, Inshuti Mu Buzima has collaborated with the Dana-Farber Cancer Institute, the Rwanda Ministry of Health, and other partners to implement training programs for the oncology staff. The knowledge we have gained in cancer care will be beneficial to Kpoeh and Dahcontee.”

In September, Kpoeh and Hardy arrived in Butaro, Rwanda, intending to learn and return home to train other nurses involved in the care of cancer patients.

“When Partners In Health approached me to come to Rwanda to learn more about oncology nursing, I was very happy. I want to learn about chemotherapy and holistic approach to cancer care,” says Hardy.

Kpoeh and Hardy’s eight-week intensive training began with an assessment of their skills in oncology.  The training was facilitated by Espérance Benemariya and Olivier Habimana, nurse educators at Butaro District Hospital, who were trained by specialized nurses at Dana-Farber.

“Kpoeh and Hardy’s training began with a general orientation and overview of Butaro Cancer Center of Excellence and oncology protocols, and they also shadowed the team at the ambulatory oncology clinic to learn about different services provided in the oncology program,” says  Habimana.

Other parts of Butaro District Hospital also play a crucial role in the treatment of cancer patients. The pathology lab delivers results that help clinicians provide accurate and timely diagnoses.  And surgeons are available to remove tumors or perform such specialized care as mastectomies for breast cancer patients.

Weeks into their training,  Kpoeh and Hardy had acquired fundamental knowledge of oncology program services and were ready to dive into complex topics.

“Before coming to Rwanda, I had limited knowledge about chemotherapy,” says Hardy. I was relying on the instructions stated on the label.”

Under the supervision of nurse educators, physicians, and their fellow nurses, Kpoeh and Hardy spent the second part of their training shadowing the everyday routine of an oncology nurse. They became better at mixing, administering, and safely handling chemotherapy drugs. They also learned more about cancer, its epidemiology and prevalence in developing countries, cancer treatment protocols, and treatment options, including palliative care.

Kpoeh and Hardy are not the first to come to Rwanda to learn about Inshuti Mu Buzima’s approach to addressing health equity. And surely, they will not be the last.

Over the years, more than 100 nurses and 20 doctors from Rwanda, Liberia, and other countries have gone through the training program to learn about Inshuti Mu Buzima’s holistic approach to care in oncology.

“Partnership in knowledge sharing is paramount and much needed in Africa,” Bigirimana says. “Each country has different expertise that others can learn from and help to promote PIH’s mission to provide a preferential option for the poor in health care.”

PIH Liberia’s Daniel Maweu discusses the Nursing Center of Excellence in a Q&A, addressing nursing shortages through education and research in Liberia.