A Safe Birth, and Welcome Relief, in Sierra Leone 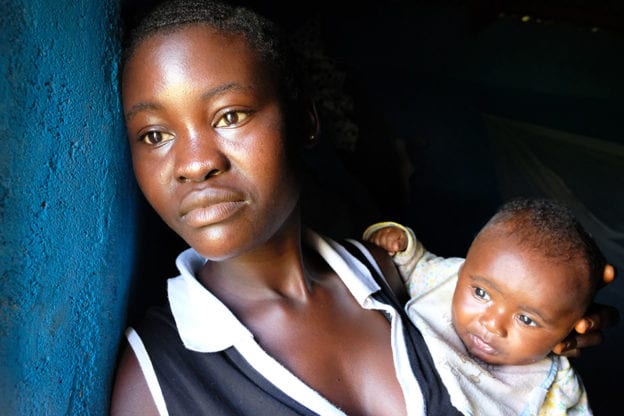 When 18-year-old Fanta Karoma found out she was pregnant, she was scared. It was her second pregnancy—her first child had been stillborn, after a complicated birth—and it was also bad timing. She was training to become a seamstress in Kono, eastern Sierra Leone, and enjoyed stitching patterns from lapa fabric, learning to design stylish outfits for customers.

Before long, Karoma’s boss noticed her growing baby bump. Annoyed, he pressured her to have an abortion. Karoma contacted a backstreet abortion provider, someone who lived in her village.

Because her neighbors, who had heard horror stories, told her it could be unsafe, Karoma decided to go through with the pregnancy. Her dad, with whom she lived, was angry. She briefly moved in with the baby’s father, but “he kicked me out shortly after, and didn’t want to take responsibility” for her and the new baby.

Like many women in Sierra Leone, Karoma thought she was out of safe options. Sierra Leone has one of the highest maternal mortality rates in the world, at 1,000 per 100,000, and about half of all women give birth at home, far from skilled clinicians should emergencies arise.

After Karoma told her story to a clinician at her local health facility, she was referred to Wellbody Clinic, a Partners In Health-managed facility in Kono. There, a midwife met with her, reviewed her files, and, she says, “invited me to stay at the birth waiting home.” Karoma realized that it wasn’t the first time she had heard the idea. “I had already been told about it by another pregnant woman in my village. She had visited me at my house to tell me about the birth waiting home when she heard I was pregnant again.”

The birth waiting home—a whitewashed house on a hill—provides a tranquil environment where at-risk expectant mothers, including those who live far from clinics, receive three meals a day and regular checkups. There are shaded porches to rest out of the hot midday sun, and everything, including food and accommodation, is free.

“The great thing about the birth waiting home is that it’s built specially for the pregnant women,” says Zainab Kalokeh, a midwife who cared for Karoma. “The rooms are convenient, with bed nets and everything, as well as a water supply. The place is comfortable and nice.”

Even better, the home is a short distance from the maternity ward at Wellbody Clinic, where despite the national statistics, there hasn’t been a maternal death in two years. That’s half the amount of time that PIH has been working in Sierra Leone, initially responding to the Ebola outbreak in 2014, then staying to focus on Kono district in the country’s far east, and partnering with the Ministry of Health and Wellbody Alliance to strengthen the health system.

Reducing Sierra Leone’s sky-high maternal mortality rate is a priority, and the birth waiting homes are a cornerstone of PIH’s approach.

Karoma moved in. “I felt gladi,” she says, in Sierra Leonean Krio. “I knew I would get the best possible medicine and care at the birth waiting home. When I was there it felt like my family. I made friends with the other women and I wouldn’t worry about being hungry.”

At the birth home, Karoma had help drawing up a birth plan. Because her first pregnancy had resulted in a frightening, prolonged labor that lasted for three days, the team recommended a planned cesarean section for this pregnancy.

Night was falling when Karoma felt the first pains of labor. Kalokeh accompanied Karoma in the ambulance to Koidu Government Hospital.

“I was scared and in a lot of pain, but everybody was helping me,” Karoma says. “I had confidence that it would be alright this time.”

“We managed to talk to her, calm her down,” Kalokeh says. “We gave her confidence that when she will go to the hospital, she will have a baby. And she was so eager to have that baby.”

Her baby, John David Karoma, was born by c-section soon after.

Kalokeh says that Karoma’s case is not uncommon, and that she sees many women with complicated and at-risk pregnancies. “While some of those admitted to the birth waiting home come because they live far from a health facility, others have conditions like pre-eclampsia. Our aim is to make sure they have safe deliveries, and to save lives.”

Karoma has now returned to her home village with John. “If I hadn’t heard of Wellbody or gone there, I think I would have died this time,” she says. “I know many women who have died trying to give birth at home this way. I’m looking around now, wherever I can, for pregnant women, to tell them to go to Wellbody Clinic.”

Best of all, she is still excited about continuing to train as a seamstress. Once John learns to crawl, she hopes to get back to work. “I want to learn to be a seamstress so I can support him,” she says. Her chosen career will have an added bonus: new clothes for the little one.

When poverty makes basic care too far and too expensive to access, motherhood for women like Fanta goes from a moment of joy, to one that’s dangerous or even fatal.

Your support will help fight dangers faced by families like Fanta’s and make room for more joy.