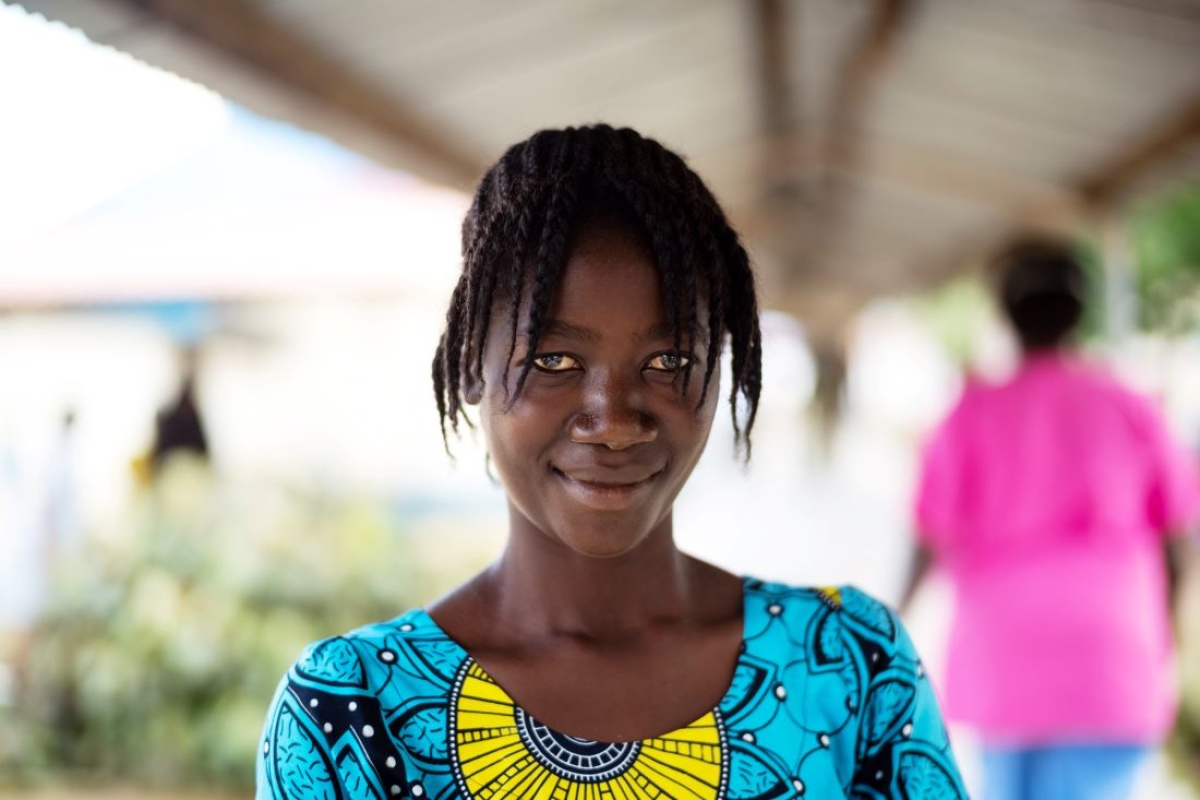 PIH connects patient with treatment, care, and accompaniment over a months-long journey

The headaches began in July 2019—but up until then, 15-year-old Emma* Gbonbor was living a healthy, happy life at home in Kono District, Sierra Leone.

She and her twin sister, Kadie*, are the second youngest of seven siblings. Entering her second year of high school, Emma chose math as her favourite subject, inspired by Kadie, who excelled at it and tutored her at home. She played soccer with her friends. In the evenings, between homework and chores, Emma danced to the pop music blasted by her next-door neighbors.

Then came the headaches—always accompanied by fever, weakness, and, as the family discovered one night around 3 a.m., seizures.

Immediately, Emma’s mother, Rebecca, took her to nearby Koidu Government Hospital (KGH)—the only hospital in the district, supported by Partners In Health (PIH)—where clinicians in the outpatient department suspected malaria. Soon Emma was home with antimalarial pills and experienced some relief. But less than a week later, she was back in the hospital, admitted to inpatient care after having experienced more seizures—sometimes three per day. She’d begun to anticipate when they were coming on.

“It was the headache that started and then the convulsion started to affect her. She was complaining about her head. She would say, ‘Mother, it is that sickness that is about to affect me,’” Rebecca said.

“Whenever she said that, I would see her fall down and lose her senses.”

Over five days at KGH, clinicians stabilized her and sent her back home. But yet again, one week later, she returned—this time in critical condition. After a particularly intense seizure, she’d fallen unconscious.

“She was on the verge of death,” Rebecca said, recalling bringing her daughter to KGH for the third time—despite those telling her not to.

“People were calling me, saying, ‘This is not a disease for the hospital,’” she said, referring to neighbors who suspected witchcraft, the only cure for which lay with one of Kono’s traditional healers.

“I said, ‘We are not going any other place. We pray. And then the medical.’”

It was Dr. Ikechukwu Nnanna’s first week of work at KGH, as a pediatric medical officer hired by PIH to bolster the hospital’s pediatric care when he met an unconscious Emma in the emergency ward. A community health officer—akin to a physician’s assistant in the U.S., far outnumbering medical doctors at KGH and across Sierra Leone—had put Emma back on antimalarial drugs, as a rapid diagnostic test for malaria returned positive. It was the height of the rainy season, and pediatric staff see upwards of 90 patients per day, 85% of whom have malaria.

Nnanna, however, had other suspicions: meningitis and, likely, a brain tumor.

“I examined Emma and found that she had neck stiffness and hemiparesis – or partial paralysis,” he said. “I thought, ‘This isn’t just ordinary malaria.’ So I asked for more tests to be done.”

KGH lab technicians ran a battery of tests, from blood tests for HIV and kidney function to a chest X-ray to search for tuberculosis (TB). All came back normal—meaning all that was left to do was examine Emma’s brain.

A computerized tomography (CT) scan—an advanced machine producing highly detailed images of inside the body—is rare in Sierra Leone, and one of the three that exist countrywide sits at a private health facility in the capital city, Freetown. So, shortly after admitting Emma, PIH staff made the five-hour journey from Kono with her and Rebecca.

There, on the scan, staff observed a huge mass on Emma’s brain, along with three smaller masses.

Extrapulmonary TB is an increasingly common form of tuberculosis, one of the world’s deadliest infectious diseases, in which the bacterium causing TB travels outside the lungs and lodges itself in another part of the body. In Emma’s case, TB was living in her brain—causing her seizures, as well as a secondary infection of meningitis. But without advanced medical equipment, it is impossible to detect the condition. KGH’s clinicians weren’t able to diagnose Emma’s using a chest X-ray or tests.

“Tuberculosis comes in many forms now,” Nnanna said. “If you are not vigilant, you think TB is only [indicated by] coughs. But TB disguises itself. If you are not precise in your diagnosis, you might miss it.”

Emma remained unconscious and was put on a feeding tube.

“I was not feeling good,” said Rebecca. “A kind of sickness that my child never had, all of a sudden it has affected her. I was just crying and praying. That was my only job. Crying and praying.”

But with a diagnosis came a treatment plan: anti-TB drugs and broad-spectrum antibiotics, including a drug used to treat meningitis that PIH procured internationally, as it is not available in Sierra Leone.

And with a treatment plan came reason for optimism—a feeling sorely needed by the Gbonbors, as Emma’s sickness wasn’t the only challenge they faced.

Only a month prior, the family lived with just enough. As their primary earner, Rebecca ran a business making and selling soap and her daily profits—15,000 Leones, the equivalent of $1.50—fed her family of nine. Her husband supplemented this income as a miner in Kono’s diamond mine—a back-breaking job for which foreign companies controlling the mine, the largest in West Africa, only paid 7,000 Leones per day, the equivalent of 70 cents.

But when Emma was admitted to the hospital, Rebecca put her business on hold to stay with her daughter, day and night—meaning that 7,000 Leones a day were all that the Gbonbors had to survive. Meanwhile, PIH provided meals to Rebecca while she remained by her daughter’s side.

As the medications began to do their work, and clinicians saw Emma’s progress, the Gbonbors felt a deep sense of relief.

Another trip to Freetown and more CT scans had revealed that the brain masses had disappeared.

“We were so glad,” Nnanna said. “We were checking her every day, monitoring the results of the medications. … So when she started gaining consciousness, everybody was happy that Emma was coming back. There was hope.”

The first thing Emma asked for was to see her twin, Kadie, in her brand-new school uniform—a request Kadie didn’t need to be told as she made her daily visit to the hospital straight from school.

“Emma was very, very happy with her sister that day,” Rebecca said. “And I had happiness within me. My child survived, and I was able to return with her home.”

That return didn’t happen for another two months, as clinicians kept Emma in the hospital to continue monitoring her condition and to provide rehabilitative support. Slowly but surely, with the help of clinicians and Rebecca, Emma regained her ability to sit up, then stand, then walk. She began eating again, and her seizures became less and less frequent.

Emma, eager to get back home, was finally allowed to do so. Aside from having to visit the hospital every two weeks for check-ups, life could return to normal.

Emma got home and began sweeping.

“That is my job, to sweep the compound,” she said.

“That is her fun job,” Rebecca added, smiling.

Old routines provided comfort, but of course, nothing was exactly the same. Most frustratingly for Emma, the transition back to school hasn’t been seamless. Having been pulled out of school midyear by her illness, she re-enrolled only to fail her exams, due to difficulty writing—a lingering result of her paralysis.

This fall, Emma is repeating her last school year, with high hopes of not only passing but succeeding academically. She also has a new dream to motivate her: becoming a nurse, inspired by the pediatric nursing staff at KGH who helped care for her.

And this time, her twin sister is following in her footsteps.

“Kadie too said she wanted the same,” Rebecca said. “They love each other.”

“Sometimes I sit down with my husband and we … say that we do not have anything, but we have something,” she continued.

“Our child has survived, we are now seeing her and all of us are sitting together and chatting. It is a great joy.”

Thanks to Emma’s case, more families will get to know that same joy: Nnanna said that this summer, he and the pediatric staff at KGH successfully diagnosed and treated more than three cases of TB meningitis in children and many cases of extrapulmonary tuberculosis.

“One was critically ill, unconscious, like Emma. And as soon as we started the anti-TB medications, she started getting well,” Nnanna said. “We often undermine TB here, but Emma’s case gave me a new approach, not to overlook or undermine anything. And it taught me a lesson in how to be committed to patients: Emma’s life matters a lot. We didn’t leave any stone unturned, and now, everything is okay. She is here.”