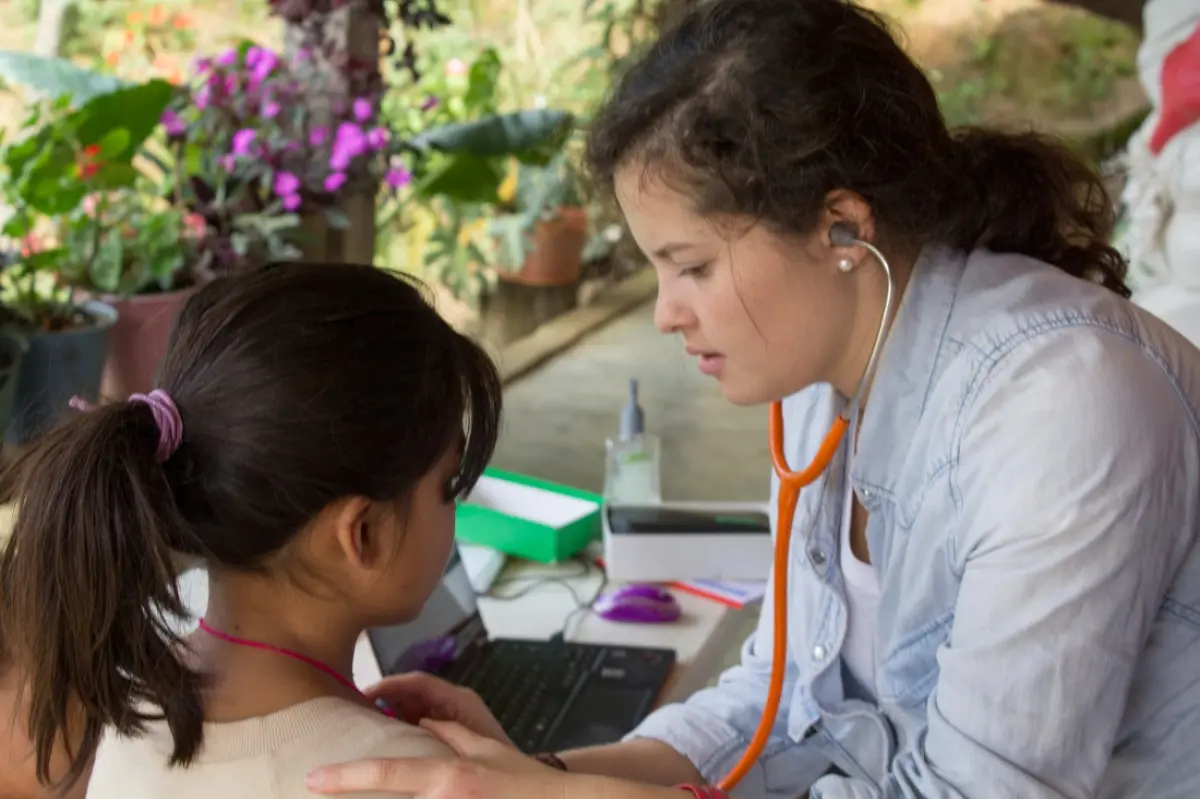 For many first-year clinicians in Mexico who complete their mandatory year of social service with Compañeros En Salud, there are two distinct phases of their career: before the internship and after the internship.

Each year, Compañeros En Salud welcomes 10 first-year doctors, nurses, and midwives to complete their year of service in the rural communities of Chiapas, Mexico. Compañeros En Salud, as Partners In Health is known locally, has worked in the mountainous Sierra Madre region of Chiapas since 2011 and training the next generation of clinicians has been a cornerstone of its work there.

For the students who serve with Compañeros En Salud, the pasante program is a time of change and discovery—shaping their perspective and approach to providing medical care and a preferential option for the poor.

Andrea Jiménez completed her year of service in 2015 in the rural, coffee-growing community of Matasano at a clinic supported by Compañeros En Salud and the Mexican Ministry of Health. She was one of more than 100 pasantes—a Spanish word for first-year clinicians—who have served with Compañeros En Salud over the years. And she’s one of dozens who have since felt called to return to the highlands of Chiapas and care for even more patients.

Ever since her childhood, Jiménez had dreamed of becoming a doctor and exploring the different specialties of medicine.

“My parents are physicians, and they were always very involved in social medicine,” she recalls. “When I was a child, my parents would take me with them to Rotarian medical days [mobile clinics].”

Social medicine is a field that seeks to understand the social and economic conditions that impact health and prevent patients from accessing care. For Jiménez, that concept was always more than a theory learned in a classroom.

From an early age, Jiménez witnessed the impact that a van full of medicine and a few doctors giving consultations could have on people’s lives in rural Chiapas. Huge lines would form in the communities where these mobile clinics came, providing free check-ups, testing, and medications.

It was through these experiences that her passion for providing dignified health care for the poor was born and that, years later, she learned about Compañeros En Salud. She began talking to pasantes in the communities where they worked and made the decision to do her year of service with Compañeros En Salud.

“My way of practicing medicine changed forever,” says Jiménez. “I will never understand 100% what it’s like to live in the shoes of people living in rural communities. But now I understand the heavy burden of a person’s life context on their health.”

For instance, she learned that patients often had complex reasons for missing appointments or skipping their medicine—and blaming them wouldn’t improve health outcomes or fix the social and structural barriers that prevented them from accessing care. These barriers often included distance, a lack of specialists, and stigma around certain conditions and diseases. And the impact on health was often devastating—patients waited years for surgeries, even as their health conditions worsened.

In the communities where Compañeros En Salud works, there were no gynecologists, meaning that women would have to travel for up to eight hours to see these specialists in Tuxtla or Tapachula.

That critical need inspired Jiménez to pursue a residency in gynecology, after completing her year of service.

“Even during the specialty [residency], I always had in mind wanting to return to be able to support with these newly acquired skills,” she says.

A Call to Return

A few years after finishing her residency, Andrea returned to Compañeros En Salud—this time, as a specialist.

In collaboration with Dr. Jimena Maza, director of clinical quality and teaching, and Dr. Karla Saldivar, a gynecologist formerly with Compañeros En Salud, Jiménez began to plan “surgical campaigns”—an initiative where obstetric, urological, and gynecological surgeries would be provided to patients at the hospital in Jaltenango, allowing them to access care close to home and avoid traveling to advanced hospitals in faraway cities, incurring food, lodging, and transportation costs.

The campaigns were difficult to plan. Jiménez and the team faced many challenges, such as limited hospital capacity, surgical materials, and specialists—from patient admission to post-operative care—who would be willing to travel to Chiapas to perform these surgeries.

But the initiative was much needed. In the first week alone, Jiménez provided consultations, surgeries, and post-operative care for more than 90 patients in need of various gynecological surgeries.

To date, Compañeros En Salud, in collaboration with the hospital in Jaltenango, has carried out four surgical campaigns and 140 surgeries, ranging from c-sections to salpingoclasies (tubes tied) to endometrial biopsies.

For Jiménez, each surgery deepens her commitment to social medicine and reminds her of why she chose a career in health care.

“All the work is worth it to see the positive results in the patients, knowing that you took part in improving their quality of life,” she says.

In Mexico, new clinicians are ready for a year of constant growth as a medical training program continues vital work amidst COVID-19 pandemic.