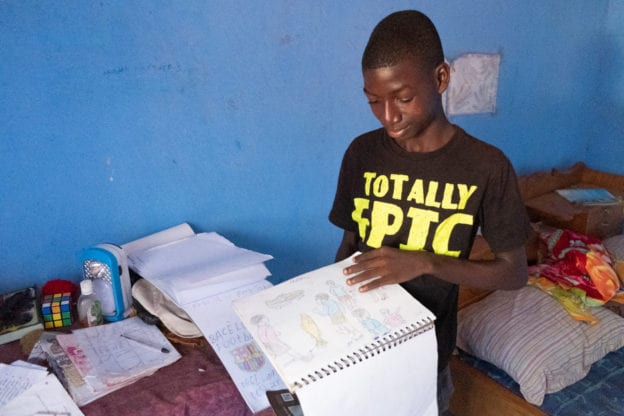 Mondeh Mansaray sketches the form of his favourite football player with swift, diligent movements of his pencil. Nothing can break his focus as he sits curled-up on a wooden stool and pores over the white page in front of him.

For Mondeh, 14, Saturday morning means one thing: no school. He can sketch in his bedroom, play football—soccer, to Canadians—outside with his friends, and help his family with household chores. The relaxed day is a welcome respite from the busy school schedule he follows during the week.

Mondeh’s weekend activities are not unlike those of other youth in his village in Kono District, Sierra Leone. But they are very unlike the gruelling routines he knew over the past several years, during extended medical treatment. The scar etched into his neck serves as a reminder of the malignant tumour that used to grow there, and that once left him fighting for his life.

“The swelling would feel painful,” Mondeh recalled. “It was very serious. I was thinking I would not survive the sickness.”

In January 2015, Mondeh was diagnosed with Hodgkin lymphoma, a cancer that targets the immune system; can cause swelling in the neck, armpit, or groin; and is a leading cause of cancer diagnoses for teenagers and young adults globally. While roughly 17 million new cancer cases were reported worldwide in 2018, including more than 1 million in Africa, Mondeh’s was the first known case of Hodgkin lymphoma in Sierra Leone.

While cancer care is very limited in Sierra Leone, on West Africa’s coast, Partners In Health is working to change that dynamic. The years that Mondeh spent fighting the disease, and the vital treatment and support he received through collaborations between government health officials, PIH teams, and consulting clinicians around the world, became a model for health care in Sierra Leone that has extended far beyond Mondeh’s own case.

Like so many, his case started with a lump. For Mondeh, it was on the side of his neck, about eight years ago.

Growing up, Mondeh was always one of the liveliest of the family’s six children, so his parents were confused when he started acting withdrawn and lethargic. Their concern grew when the swollen lump appeared, when Mondeh was about 6. Multiple visits to nearby health centers, however—over the next several years—failed to identify the cause of the growth, or reduce it. It was only when a clinician visiting his village noticed Mondeh, and examined him, that he was referred to the PIH-supported Koidu Government Hospital in eastern Sierra Leone. There, Dr. Yusuf Dibba diagnosed him with Hodgkin lymphoma.

“When I first met Mondeh, he was struggling to swallow and eat (because of the tumour’s size), so he was losing a lot of weight,” Dibba recalled. “The mass had been growing for around six years at that point, and he had previously been diagnosed incorrectly with TB.”

With cancer care scarce across the country, for even the most common cases, Dibba worked with Jon Lascher, then chief operating officer for PIH Sierra Leone; Dani Kloepper, a nurse working with PIH during the Ebola response, which began in 2014; Dr. Kerry Dierberg, then executive director of PIH Sierra Leone; and Dr. Joia Mukherjee, chief medical officer for all of PIH, to create a treatment plan and connect with colleagues around the world. The plan involved oral and intravenous medicine, and radiotherapy. The first step was a biopsy of the tumour on Mondeh’s neck, completed at Connaught Hospital in Freetown, Sierra Leone’s capital.

Mondeh said that while he feared for his future, his family did not waver.

“My father was always sure I was going to survive,” Mondeh said. “He would say, ‘Let me believe,’ so I trusted him. When he was around me, he would never be sad or annoyed.”

Mondeh stayed near the hospital for nearly a year, either as an inpatient or at a nearby hotel, with PIH paying for lodging. His father, Abubakar Mansaray, accompanied him everywhere. PIH clinicians in Freetown kept a close eye on Mondeh, working in partnership with Sierra Leone’s Ministry of Health. After just a few months of treatment, the growth on Mondeh’s neck started to shrink.

“My body was tired and weak for a few weeks after each time at the hospital, and then I would feel stronger again,” Mondeh said. “I made a friend in the hospital who also had cancer. His bed was near to mine and his stomach was so big. We would walk around the hospital together to stay strong.”

By August 2016, Mondeh had responded so well to oral medicines that he was ready for the next phases of treatment: medicines via IV, and radiotherapy. Mondeh and his father flew to Rwanda, where they stayed in a PIH guesthouse while Mondeh received treatment at PIH-supported Butaro District Hospital. The hospital, which has a Cancer Center of Excellence with a pediatric ward, is supported by PIH Canada in partnership with the Dianne and Irving Kipnes Foundation.

PIH is known in Rwanda as Inshuti Mu Buzima. Clinicians at Butaro’s Cancer Center provide treatment for more than 3,100 patients, of all ages, from across Rwanda and from nearby countries such as Burundi and the Democratic Republic of Congo—and, further away, Sierra Leone—where quality cancer care is scarce or nonexistent. The distance means that in addition to facing cancer and enduring treatment, patients also are far from home, families, and school or jobs.

The clinical team at Butaro noted that despite the challenges, Mondeh and his father were adjusting well to life there soon after their arrival in August 2016.

“Mondeh enjoys having his father here to support him. They have a very close relationship, and they call home frequently during the week,” states a clinician’s report from that time. “Mondeh enjoys talking to his mother, as he misses her, and his father uses these phone calls to check in on the family.”

“I was happy in Rwanda, but I was also scared because it was my first time going to another land,” Mondeh said. “The swell had gone down but they said the disease was inside my body, so I had to go there to continue my treatment.

“I made friends while I was there,” he continued. “We would play football in the field and go to my house and sit and talk.”

Mondeh’s health rapidly improved. After a year of treatment at Butaro, he and his father were able to return to Sierra Leone, where Dibba said family members and clinicians welcomed Mondeh “almost like a king.”

Dibba saw Mondeh for regular check-ups in the months following his return.

“He pulled through,” Dibba said. “Every day, Mondeh’s father would call me to say, ’Thank you,’ but I would tell him I was just doing my job.”

“Mondeh’s father was imam (spiritual leader) of their village, and he had a farming business, but he stuck by Mondeh over the whole recovery,” Dibba recalled.

As his recovery progressed, Mondeh finally was able to resume his childhood and adolescence. But while his case was the first of its kind in Sierra Leone, it won’t be the last.

The World Health Organization projects that the number of new cancer cases in Africa per year—just over 1 million in 2018—will rise to about 2.1 million by 2040. The WHO also expects the continent’s cancer-related deaths per year to skyrocket, from about 693,000 last year to more than 1.4 million by 2040.

That means there has never been a more pressing need for established cancer care in Sierra Leone, to ensure successful outcomes like Mondeh’s are the norm, rather than a rarity.

Mondeh’s recovery was made possible by PIH and Ministry of Health colleagues in two countries working together closely. But Dibba stressed that Mondeh’s recovery does not just represent one life saved—it represents the possibility for cancer care that could save many more patients, who would be cured through access to the right treatment.

“If you don’t do anything, help will not come,” Dibba said. “Mondeh’s treatment was a big lesson for health care providers: You shouldn’t give up because of the limitations. We can’t condemn patients to die because we’ve never done it before. In PIH, we can reach out to people. We find a way.”

Mondeh now is enrolled at a new school, and regularly earns the top spot for performance in his class. Through hard work and support from a personal tutor, provided by PIH to aid Mondeh as he catches up on the school years he missed during his illness, he is well on the way to achieving a newfound dream.

“I plan to be a doctor one day,” Mondeh shared. “When I had that cancer illness, I promised myself I wanted to be a doctor so that I could help other people like me in the future.”

For now, though, Mondeh takes pleasure in quiet Saturday mornings spent sketching in his bedroom, where his most pressing concern is the best coloured pencil to use.

Although roughly 70 percent of cancer deaths occur in low- and middle-income countries, they receive only five percent of global cancer resources. See how PIH Canada is working to change this and help patients with cancer and other non-communicable diseases receive the care they need.