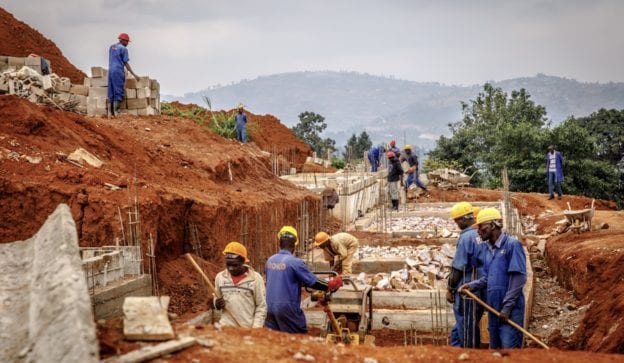 Jean Claude Niyonzima laughed when asked about his average workday in recent weeks, as he helps prepare the University of Global Health Equity in northern Rwanda for the Jan. 25 inauguration of its new, permanent campus.

His days start at 5 a.m. and quickly become a blur of contractor meetings, equipment and furniture orders, mechanical plans, and check-ups on everything from final coats of paint to ceiling fans. By the time he responds to the day’s last emails, it’s usually 10 p.m.

Construction of the UGHE campus has transformed the surrounding community of Butaro over the past two years, in ways large and small. There now are streetlights. Vastly improved public infrastructure for electricity, potable water, and internet access. The first elevator in Burera District. A future paved road to the capital, Kigali, that will drastically reduce travel time for the 80-mile trip. Construction-related jobs for more than 1,500 people, with more than 90 percent of the workforce local, and more than 30 percent women. Many workers are learning new skills—such as masonry, welding, plumbing and landscaping—that could help with future employment.

Like Anne Marie Nyiranshimiyimana. A mason on the campus project, Nyiranshimiyimana initially faced criticism—“They told me, ‘No woman builds, no woman climbs,’” she said—but she has since risen to the rank of master mason. She’s also become a source of inspiration for women and girls in her community. She’s known around Butaro by her nickname, Kankwanzi, which loosely translates to “rising star who refuses to conform to society’s expectations.”

Nyiranshimiyimana is one of many people on the construction crew who also worked on Butaro District Hospital, which opened in 2011 about two miles away. Nyiranshimiyimana began her masonry training on that project. Both the university and the hospital are initiatives of Partners In Health, a global health nonprofit that works in Rwanda through sister organization Inshuti Mu Buzima. The hospital and the UGHE campus sit atop scenic hillsides, visible to each other across a lush valley. The hospital is one of several teaching facilities that will collaborate with the university and provide hands-on training for students.

The new campus will eventually span almost 250 acres and is home to six academic buildings, housing for 200 students and staff, a dining hall, administrative spaces, and more. Though UGHE is a private, nonprofit institution, the Government of Rwanda has played an important role in its development. In addition to providing financial resources and donating the land for UGHE, the Government of Rwanda is paving roads that link Butaro with Musanze and Kigali, and has increased access to water, electricity, and internet connectivity throughout the region.

These changes have had many impacts locally, but the greatest has been on the 115 households moved to make way for construction of the campus. Many families sold their land as part of the relocation process. All of them were compensated by the government. More than 40 households have moved to a new, government-constructed model village about a mile away, called Mulindi.

Niyonzima, the facilities manager, said the relocation process began with community meetings and explanations of the campus project, which has been universally welcomed by the community. That sounds somewhat unbelievable, but Niyonzima—who grew up in Rwinkwavu, in southeastern Rwanda, and has lived and worked in Butaro for more than six years—said residents quickly saw the benefits of the new university.

Additionally, he said, many Butaro residents are farmers, who now will have a new, growing market and customer base for their produce.

Construction of the hospital, and IMB’s resulting strong reputation in the region, also paved the way for the community to welcome UGHE.

“After hearing the university project was connected to IMB, they didn’t even really ask much more,” Niyonzima said.

UGHE and the government collaborated to make the relocation process transparent and accessible.
Guided by Rwandan land laws, UGHE worked with government officials to take a full inventory of land and property. Compensation was distributed before families moved. Families were given advance notice to move, and local leadership helped several families identify and buy land elsewhere in Burera District.

When asked if any families opposed the relocation, Niyonzima answered unequivocally: “None of them. None.”

The model village of Mulindi, completed in August 2017, is not unique in Rwanda. Every district in the country has at least one model village, funded and built by the government to connect rural communities to roads, schools, electricity, water, health posts, and markets. Mulindi eventually will house more than 200 families.

Emmanuel Kamanzi, UGHE’s director of campus development, oversaw planning and construction of the campus, managing the more than a dozen contractors on site. The project actually brought him back to Rwanda, and Butaro–Kamanzi has worked for PIH and IMB in several capacities over the years, including as director of development for Butaro District Hospital during its construction almost a decade ago. Following that project, Kamanzi moved to the U.S. and worked in PIH’s Boston office, as program officer for Rwanda. But his familiarity with large-scale projects in Butaro made him a natural fit for development of the UGHE campus, so he moved back early in 2016–with a clear vision in mind, and work that won’t end with construction.

“We wanted to design and build a campus that is inspirational, durable and easily accessible, while fostering a strong sense of community and high quality of life,” Kamanzi said. “We made sure that everyone involved understood these principles, and was aligned with them. Now that construction is complete, our major focus will be to make sure that the function follows the form we’ve achieved.”

“The campus is going to be dependent on the community in Butaro—for food supplies, for services, for advice and safety, and most of all, to help us teach our students—so we will be creating an opportunity for the community to work with us,” Bekele said. “We are working on different programs that can engage Butaro residents. One is community-based education, where our students will directly learn from the community, and in turn help them while doing so.”

Bekele sees UGHE as a point of pride not just for the community, but for the region as a whole.

“This is owned by Partners In Health,” Bekele said of the university. “But, truly speaking, the people who own this are the people of Rwanda and the people of Africa.”