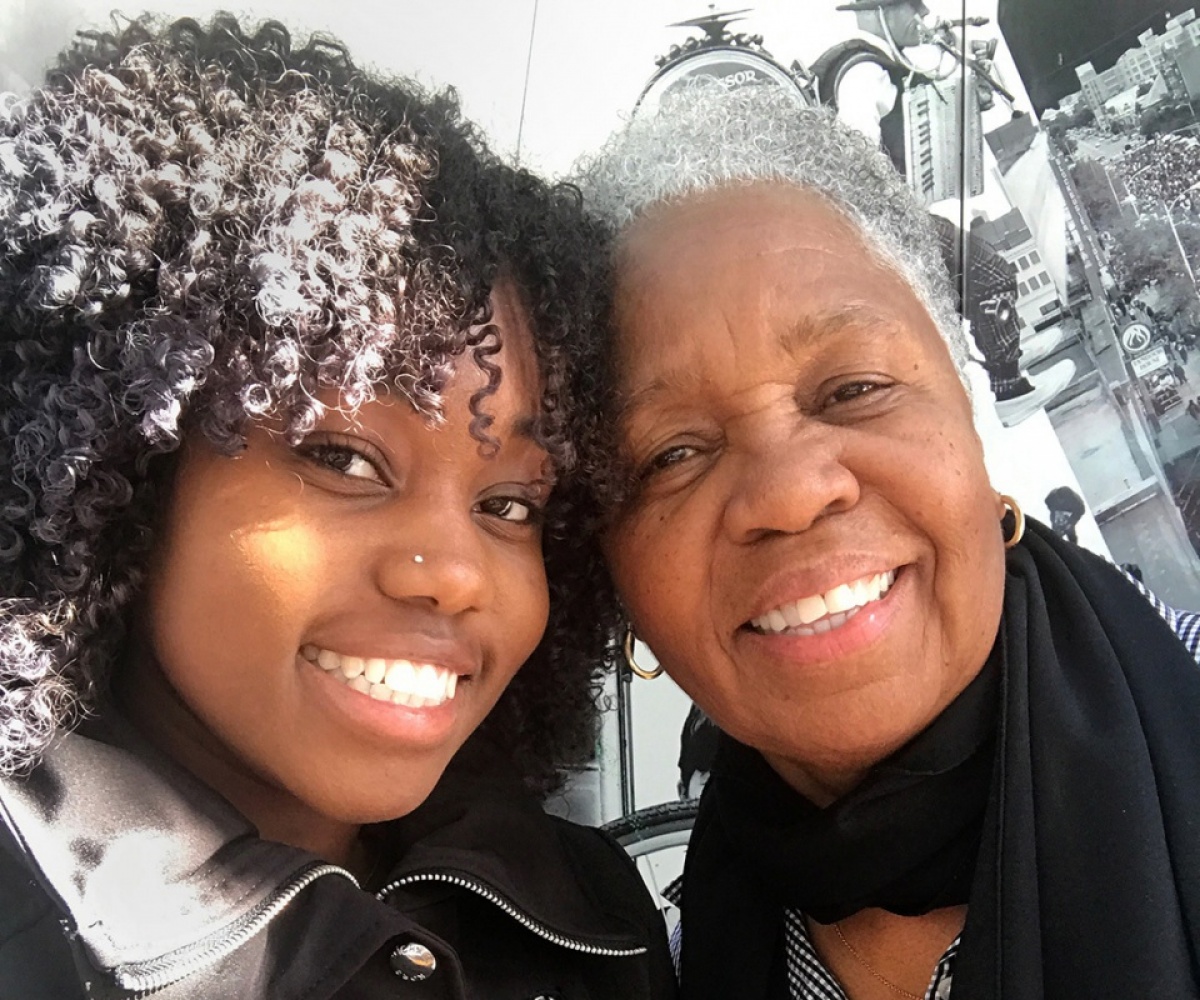 Mary Cooper wears a Partners In Health cap and a red winter jacket as she walks into her home on a snowy morning in February, after checking the car and outdoor conditions.

Over the back of the chair at her computer is a blue T-shirt that says “UConn Grandma.” It’s a gift from her elder grandson, Darius, a sophomore who’s taking classes online at home in Georgia. Cooper is immensely proud of him, and of her granddaughter Antasia, her younger grandson Jared, and her daughter, Angela.

“I love them dearly,” she says. “’Tasia, my oldest, is kind with such a wit about her. Darius is ever the intellectual, always reading and exploring, and Jared, last but not least, is wise beyond his years.”

Family always has been central to Cooper. She has lived in the Boston area for more than 50 years but grew up in Troup County, Ga., southwest of Atlanta, as the fifth of eight children. Her aunt lived with the family, as did her grandmother’s sister and brother.

When Cooper was about 5, her mother heard that schools in Alabama were better than the schools in Georgia, so she moved the family just over the state line into Alabama. It was a good change for Cooper, who said that as she got older, she gained appreciation for attending a school with all Black students and teachers.

Cooper’s mother worked as a cook in a hospital kitchen. Her grandmother, who was a sharecropper earlier in life, became the kids’ secondary caregiver, making hot meals for their lunch breaks at home.

“I was surprised and quite confused once I found out my mother didn’t make any money in that hospital—my mother worked from sunup to sundown,” Cooper says. “She did influence me in terms of work ethic.”

Her grandmother influenced her, too—in recent years, as Cooper’s own grandchildren were growing up, she became their secondary caregiver, living with them in Canton, Ga., taking them to and from school every day, and helping with homework and around the house.

“Circle of life!” Cooper says. “It was a good time for me in many ways, to spend time with my grandchildren, to teach, to prepare meals, to laugh and joke with them.”

Mary Cooper has brought that work ethic and family feel to PIH since 2014. As an accounts payable accountant in the Finance Department at the Boston office, she says, “we are the ones who keep the ball rolling,” making sure people and vendors get paid, and contracts are in order.

She also makes sure her co-workers feel at home, with regular walks around the office to stop in each department, say hello, and chat. Her visits are so well-received that, back when people could be in the office pre-pandemic, they became known as a relaxing, friendly highlight of the day.

That is, as long as you weren’t late to file your expenses.

As part of our occasional Working in Global Health series, and at the end of Black History Month, Cooper talks about working in finance at a global health nonprofit, why her daughter is named after a cultural icon, and the importance of knowing your mission.

What about working for PIH appealed to you when you applied?

I wanted to stay in the nonprofit sector. I’ve noticed that when you work at a nonprofit, people are a little more human. I’ve worked for big insurance companies and banks, but they were too large, too impersonal.

Before coming to PIH, I worked for about 10 years at Combined Jewish Philanthropies, which also is a nonprofit in downtown Boston. Seeing and working with the Jewish community was very important to me, especially after reading The Diary of Anne Frank as a 13-year-old. I wanted to continue that feeling and to find a place with part-time hours, which PIH was offering at the time.

I can’t express how privileged and honored I am to work for PIH—the work that we do here is so important.

How do you feel your experience in finance and accounting ties into PIH’s larger mission?

One of my main responsibilities in accounting is to ensure not only that our many consultants and vendors are paid in a timely manner, but also, and most importantly, to make sure that all wires and payments are sent to the sites that PIH services. That is our larger mission at PIH, to serve the people who are less fortunate than we are, who have less than we have—to give back.

What do you enjoy most about the work, and what keeps you at PIH?

I enjoy the many people from all over the world who I have had the pleasure of getting to know. The warmth and sincerity of the women and men who are dedicating their lives for the good of all whom we serve. I enjoyed the first time I met (PIH Co-founders) Ophelia Dahl and Dr. Paul Farmer, who have shown kindness, love, respect, and consideration for me.

Tell us more about your friendship with Ophelia Dahl.

It has been my honor and privilege to have met Ophelia. I did not research PIH or its co-founders until after I was hired here—I think that helped me keep an open mind about PIH and its mission.

I will never forget our first meeting. Ophelia was just so down-to-earth, and kind, and thoughtful—and she has been to this day.

She made sure I got to meet (lawyer, activist, Equal Justice Initiative founder, and PIH board member) Bryan Stevenson. That has been one of the highlights for me while being at PIH.

What have you learned at PIH, and how have you grown by working here?

I have gained wisdom and knowledge of how much I have, when there are so many people who have so little. I have learned to share my time and wisdom with those who need it most, and to better myself in every way I possibly can.

Why is it important to have a variety of voices, perspectives, and personal backgrounds working here?

I believe that all voices need to be counted and heard, especially those voices with positive perspectives. My personal journey is much like some of the sites that we service. I come from a poor sharecropping family that had so very little. I understand what it is to have no health care and limited resources. However, it is this experience that is shared by so many at the sites that PIH serves.

We’ve talked a little about your childhood in the South. What originally brought you to Boston?

My sister was here, and I was still down in Alabama, not doing the things I was hoping to be doing, like goals I had with college and the Air Force.

To this day, I’m not proud of the fact that I left the South to come here—I’m part of the migration. “Land of opportunity,” so I thought—but it’s not any better here than it is in the South.

In some ways it might be worse, because here, racism is not as open as it is in some of the southern states. Here, people just seem to have a sneakier way, to hide behind racism and inequality. More like smiling in your face, but knowing all the time, it is not meant. Now, this is not with all people, but we have a political system that I believe can work against people, especially people of color!

Can you tell us about your daughter’s namesake?

(Black feminism and racism activist, academic, author, and icon) Angela Davis was my hero, my shero, at the time my daughter was born.

I met her here in Boston – actually, after my daughter was born. My daughter was at her daycare, and one of the instructors there asked me if I’d like to meet Angela Davis and hear her speak. I said, “Would I?!” That was in the late ‘70s or early ‘80s. I saw her speak, and she was so inspiring.

During the busing crisis, Angela Davis said, “Unfortunately the people in South Boston don’t realize that they’re in the same boat as the people in Roxbury.” She meant poor Black people and poor white people need to come together and fight the cancer of racism. It’s kind of echoing now, today, what I heard Angela Davis say then.

What advice would you give to other people who might want to work in global health?

Dedication with an open mind is a good start.  Make sure that you are committed to assist in any way to help those who are less fortunate than you.

When I met Ophelia and learned her father was the author of Matilda, and as I learned more about PIH’s mission, it seemed to me that working here also could be a “circle of life” moment for me. I believe that Ophelia had a mission that was set for her, and she has followed that mission.

Seek your mission, become familiar with your mission, and dedicate yourself to the good of those who are less fortunate than you, who have so very little, with each day a struggle. Know your purpose!

As part of the Working in Global Health series, hear from PIHer Kirby Page as she reflects on merging her career with her passion for advocacy.