An X-Ray Machine that Inspires Devotion 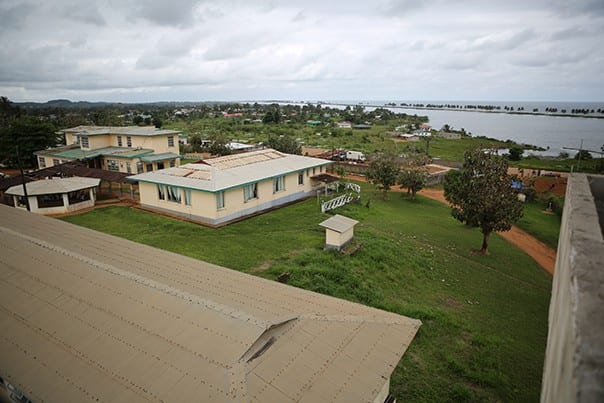 A view of the PIH-supported J.J. Dossen Hospital campus in Maryland County, Liberia.

Last month a 6-year-old girl in remote Maryland County, Liberia, was climbing a tree, as many do during mango season, and fell from a high branch. Her forearm fractured and bent. Left to heal on its own, the two halves of her radius probably wouldn’t have aligned correctly and would have grown increasingly disfigured as she aged. Her concerned mother considered taking her to a good hospital in Monrovia, but travel outside of the county was impossible except by plane. Torrential rains had turned the one road north into a mud bog.

Thankfully, there was another option. Just weeks before, in mid-September, a brand new x-ray machine had arrived at PIH-supported J.J. Dossen Hospital. The family brought the girl there, and Dr. Rebecca Cook, a PIH clinical collaborator, ordered an x-ray and then, working with a Liberian medical director and an anesthetist, was able to get the bone properly set and splinted. Then she took another x-ray to make sure the bone alignment was correct and sent the girl on her merry, tree-climbing way. “Having an x-ray machine has been a huge thing,” says Cook.

The digital x-ray machine, the first x-ray machine at J.J. Dossen in 35 years, is just part of a massive revival of the 1950s-era hospital. Highlights from the last year?

New equipment—autoclave for sterilizing surgical instruments, otoscopes for diagnosing ear and nose infections, ultrasound for evaluating high-risk pregnancy and diagnosing abdominal masses, and GeneXpert to quickly and accurately diagnose tuberculosis.
Emergency room—doubled the size.
Operating room—built a changing area, a pre-op room, a scrub station.
Blood bank—created a room for it.
Maternity ward—replaced an asbestos roof and installed solar-powered lights.
Electrical system—purchased a massive generator and connected it to the hospital via wires buried in a 200-yard-long, hand-dug trench.

Residents certainly appreciate the renovation, and visits have increased. “‘If you build it, they will come.’ We’ve already seen that a lot,” says PIH Child Health Lead Dr. Sara Beste. “But what’s so unique is the excitement of the staff. Everyone is so enthusiastic and passionate.”

If there’s one upgrade that inspires the most devotion, it’s probably the x-ray machine. About the size of a small cabinet, the computer images it produces can be zoomed in or out, made darker or lighter.

Students at the county’s nursing school used to travel eight hours to see the nearest x-ray machine, but now they can just pop down the street. The staff at J.J. Dossen was so enthusiastic they began using it even before the emergency department was fully remodeled.

Though the machine can aid in diagnosing pneumonia, the enlarged heart associated with cardiac failure, bowel obstructions, and of course broken bones, it is especially helpful with diagnosing tuberculosis, which is frighteningly common in the area. Those with HIV and TB don’t always have positive sputum samples, says Cook. And young children can’t cough up sputum at will. But an x-ray can often see the disease regardless. “Having an x-ray helps us screen those with the highest risk of death from TB,” says Cook.

The machine also helps with less fatal forms of TB. Cook recalls a young girl who was recently admitted, having been treated for a leg wound at another facility months earlier. “She just wasn’t improving in the way one would expect,” Cook says. An x-ray revealed an infection of the skin and bone, most likely from TB.

Symbolically, too, it’s hard to match the power of the x-ray. J.J. Dossen Physician’s Assistant Paul Geah, 50, grew up in a small town in Maryland County and lost multiple siblings to malaria, which was so common and poorly understood back then that they just called it “fever.” When he was a teen, he pledged to change things. “If I go into medical school, I will be able to help my people,” he remembers thinking.

He made it to high school in distant Monrovia and was accepted into, and graduated from, medical school. But unfortunately when he returned home to work in J.J. Dossen in 1981, the x-ray machine had broken a year earlier. “It was a big regret that we could not give x-rays,” he remembers.

Now, some 35 years later, he’s still helping his people at J.J. Dossen. But with an x-ray machine. “When you enter the ER,” he says, “it is almost like you are in Europe.”