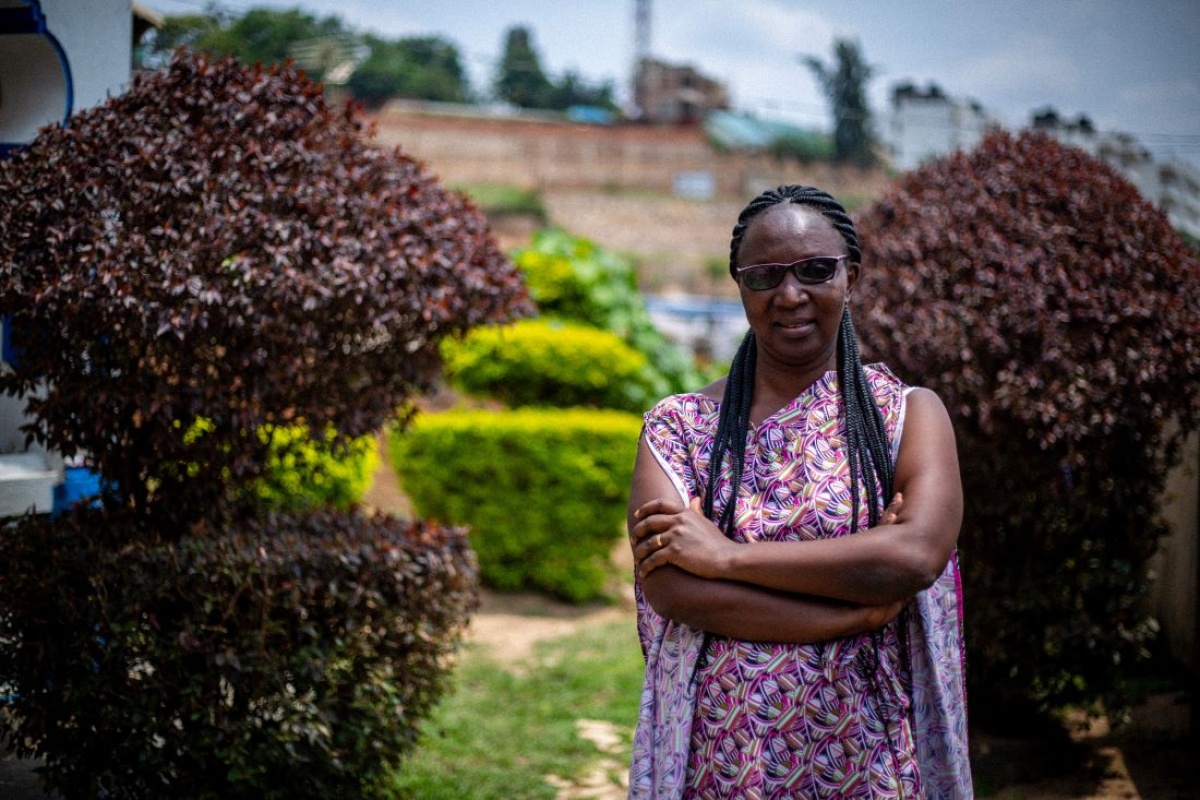 She was among the first oncology patients admitted at Partners In Health-supported Butaro District Hospital, which opened its doors in 2012 and is reimagining equitable cancer care not only in Rwanda—but across Africa. From 2012 to 2019, the hospital admitted 11,107 patients diagnosed with cancer, the most common type among adults being breast cancer.

While not all of these services were available at the time Mukawera arrived in 2013, she fondly remembers the quality care she received at the hands of staff at Inshuti Mu Buzima, as PIH is known in Rwanda. This is her story, which she chose to tell to convey a lifesaving message: Breast cancer is not a death sentence; early diagnosis saves lives.

In Her Own Words

“In 2013, I went to visit a friend who had breast cancer surgery. I was informed about cancer because I was a nurse, and at the nursing school we learned about cancer and steps for self-examination of breast cancer.  When I got home, I felt motivated to self-examine my breasts to know my status. After breastfeeding my second child, she was 4 months then, I performed a breast cancer self-exam and felt a small lump in my breast. I neglected it because it was small and felt completely normal.

There was one risk factor. In my family, my older sister was diagnosed with cancer, so I was a bit worried. One day after my rounds at University Teaching Hospital of Kigali, I decided to go for screening at a private hospital. The doctors ordered many tests, but I was only interested in breast cancer screening.

I remembered a friend who was working at Butaro District Hospital. I called her and asked if I could go to Butaro for breast cancer screening.

I went for my screening at Butaro with no symptoms whatsoever. One month later, I got a call to go pick up my results.

My husband and the rest of the family thought I was going to die.

The news was welcomed with shock, fear, and disbelief in the family. My husband and the rest of the family thought I was going to die. I was the head of my department; all my coworkers were sad.

Despite the fear of a disease that, by then, was believed to have no cure and was extremely fatal, I started my treatment journey. I used to travel many hours to Butaro, drive through impassable roads, and leave my breastfeeding 5-month-old daughter at home crying. It was depressing.

In late May, I had surgery and then chemotherapy for the next six months. After those months of full spectrum of treatment, I started to feel normal again; my hair grew back and I started meeting my doctor once in a while.

Those first months of treatment were difficult times, giving up seemed like an easier option, but I didn’t.

During my course of treatment, I kept going to work, and I never missed a single doctor appointment.

My husband gave me hope, my family members were there to offer their support, and my friend I mentioned before who had cancer was my companion throughout the whole journey—together we gave each other hope. Above all, I had faith in God that made me go for screening very early, despite not having any warning signs. It was a miracle.

I can’t forget the doctors and nurses who supported me at Butaro District Hospital. Their names live forever in my mind. I still remember Nurse Rachel, who is still my friend. I remember a nurse we called Mama Mugisha, Gilbert, a doctor who spoke Kirundi, Nurse Claude, Dr. Cyprien, and everyone who did what seemed impossible to save my life.

During my treatment, Partners In Health covered all related costs, medication, and provided other support like food, transportation money, and supplementary foods for my daughter. I didn’t even pay for my first screening test.

I believe that breast cancer is not a death sentence.

After 13 months of treatment, I tested negative for breast cancer.

Up to now, Partners In Health continues to provide free medication and consultation until I finish my 10-years regimen. It’s been eight years since I was diagnosed with breast cancer, and I can say I am living proof that breast cancer is not a death sentence.

I can’t sugarcoat it; some patients I shared a bed with died. But I have seen many people who went on to lead a healthy life after their breast cancer treatment, including my friend Rachel, my older sister, and patients I met at Butaro District Hospital.

I believe that breast cancer is not a death sentence. When you seek help early, you can beat cancer. This is the message I share with other women and girls at my church, workplace, and whoever comes to me for advice about breast cancer.”

Diane Mukawera, now 50, is drawing close to the milestone 10-year mark for breast cancer care. She still receives medication to reduce the risk of cancer recurrence. Like other women living near the capital who have been treated for early-stage breast cancer, the pills are provided by Partners In Health and sent to Rwanda Military Hospital, which is less than five miles from her home in Kigali.

After her first negative result for breast cancer in 2014, she has been going for screening regularly and all the results have shown that she doesn’t have breast cancer.

In 2017, she retired from her 16-year nursing career to become an entrepreneur. Today, she runs a successful event decoration company. Her daughter, who was breastfeeding when she was diagnosed with breast cancer, is now a beautiful and smart 13-year-old girl completing her primary education. Her friend, who also received breast cancer treatment at PIH-supported Butaro District Hospital, is cancer free.

In Rwanda, the ongoing ‘All Babies Count’ initiative has reduced neonatal deaths by 35% in rural districts. Among high-risk preterm and low-birth-weight newborns, the reduction rate was even greater – 49%. Learn more here.