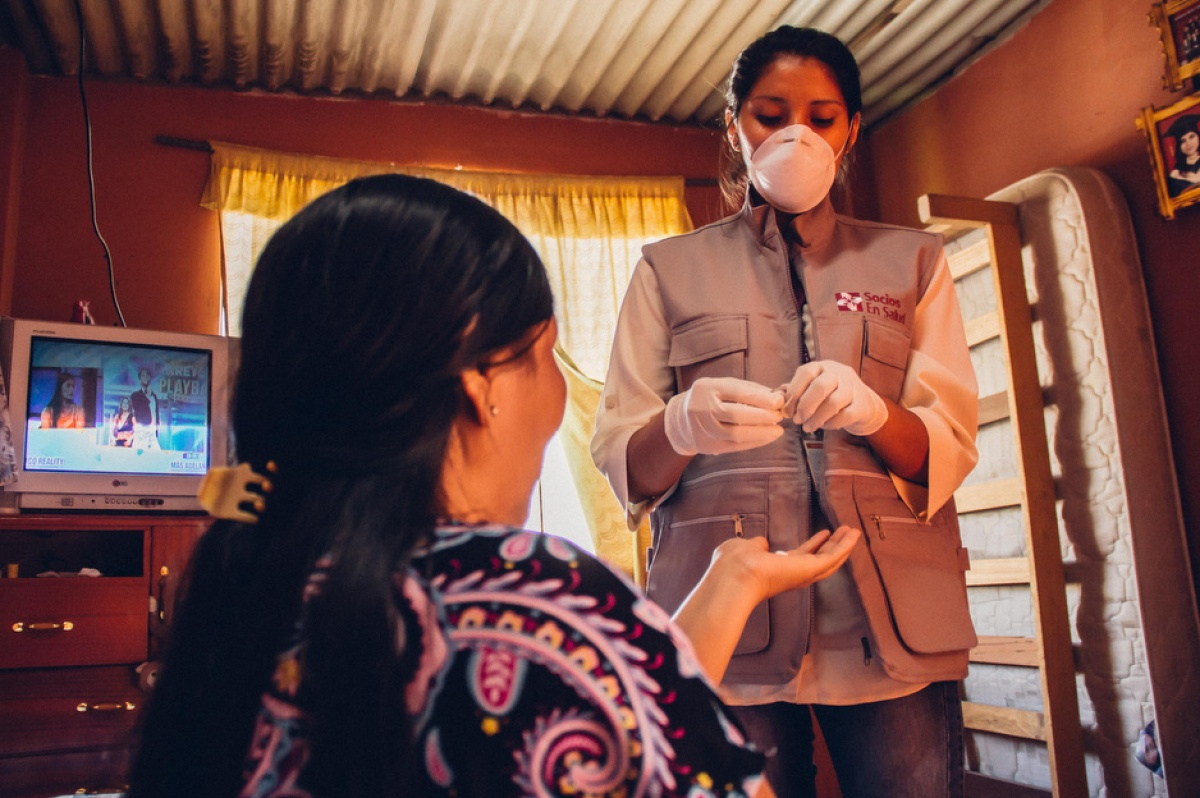 In Lima, Peru, Gaby Merlin Contreras, a field technician with Socios En Salud, administers treatment to a patient living with XDR-TB as part of the endTB project in March 2016. (Photo by William Castro Rodríguez / PIH)

The race to find a safer, shorter treatment for one of the world’s deadliest infectious diseases just advanced to the next level.

The endTB project has enrolled 750 patients across four continents in a clinical trial aiming to find safer, shorter, and effective treatments for multidrug-resistant tuberculosis (MDR-TB).

Partners In Health is among the organizations leading the clinical trial, along with Médecins Sans Frontières, Interactive Research and Development, and financial partner Unitaid.

The clinical trial comes as part of the endTB project, which was launched in 2016 to revolutionize treatment for MDR-TB patients. Enrollment was completed earlier this month, even as COVID-19 paused hundreds of clinical trials and caused a reduction in TB diagnosis and treatment worldwide—making the milestone even more notable.

MDR-TB is an airborne, infectious disease that has become resistant to standard antibiotics. Each year, 500,000 people fall sick with MDR-TB, and nearly 200,000 die, according to the World Health Organization.

Existing treatment regimens for MDR-TB are long and painful, requiring daily injections and taking as long as 2 years to complete.

These new regimens could shorten the treatment timeline to as little as six months and wouldn’t require daily injections—an outcome that would be revolutionary for patients living with MDR-TB.

“Shortened regimens, which don’t require daily injections, represent a major advantage to patients and health systems,” says Dr. Carole Mitnick, senior TB researcher with PIH and co-principal investigator of the trial. “We launched the endTB trial to ensure that we have the strongest possible evidence for safe, effective, shortened, injectable-sparing regimens that can be made available worldwide.”

Patients were recruited for the Phase III randomized controlled trial from seven countries, including Kazakhstan, Lesotho, and Peru—countries where PIH works and where MDR-TB is an ongoing threat.

“In Peru, we are very proud to be part of the endTB clinical trial and to actively contribute, so Peruvian patients have access to oral and shortened treatments for multidrug-resistant TB,” says Dr Leonid Lecca, executive director of Socios En Salud, as PIH is known in Peru. “Every day we see a growing interest from health care professionals and among the community to access these treatments.”

The clinical trial aimed to enroll a diverse group of patients to ensure that clinicians would have the data they need to best care for vulnerable populations.

The trial also aimed to shorten the research and development process, where scientifically prudent, getting potentially life-saving drugs to patients faster. Instead of testing the different regimens sequentially—a process that could take 10 years or longer—PIH and partners used adaptive randomization, a method that allows for a relatively small sample size, requires fewer resources and may enable dramatic improvements in treatment over shorter periods of time.

The results of the clinical trial will be available in 2023 and will be relevant for a wide range of patients living with MDR-TB.

In Sierra Leone, a 13-year-old girl recovers from TB Meningitis; Partners In Health connected her with treatment, care, and accompaniment over a months-long journey.