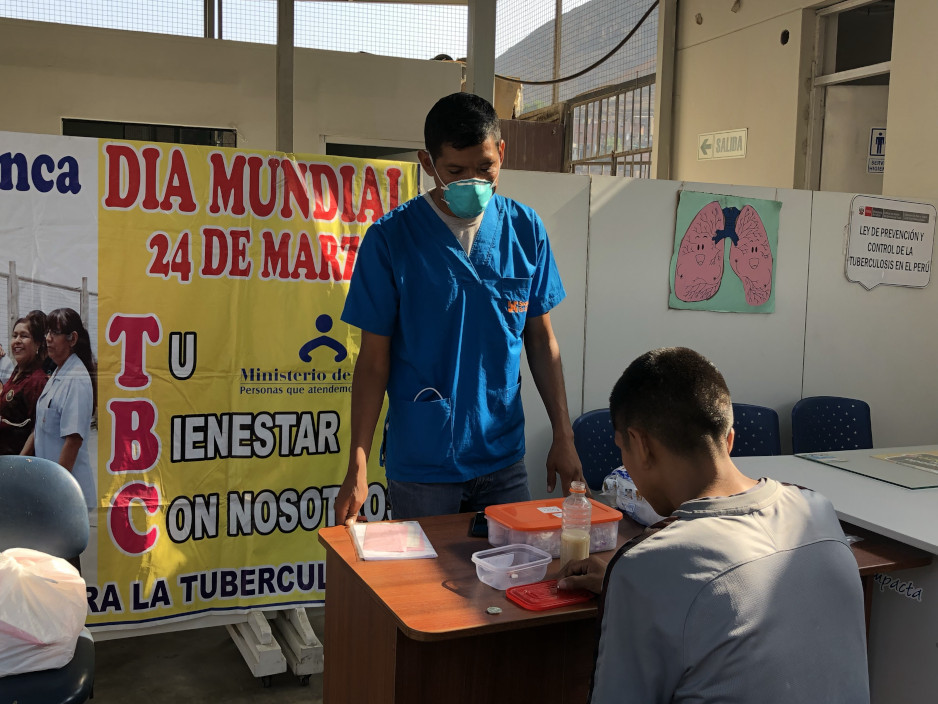 The endTB partnership conducted the research, which includes observational data from a diverse cohort of patients in 17 countries, including patients in PIH programs in Lesotho, Peru, and Kazakhstan. The results underscore the need for expanded access to the recently developed TB medicines bedaquiline and delamanid.

The study found that new treatment regimens for multi-drug resistant tuberculosis (MDR-TB), a severe strain of TB, showed early effectiveness in 85 percent of patients. The cohort included many people with serious additional illnesses, or comorbidities, that would exclude them from clinical trials.

By contrast, the historical standard of care, still in use in much of the world, has about 60 percent treatment efficacy globally, along with more grueling treatment regimens that can have harsher side effects and a longer duration than regimens with the new drugs.

The study was published July 24 in the American Journal of Respiratory and Critical Care Medicine.

“This is important evidence that these new regimens will work well for the true population suffering from this disease,” said lead study author Molly Franke, a Harvard Medical School epidemiologist and longtime collaborator with Socios En Salud, as PIH is known in Peru.

“In global health we see many vicious cycles, where poverty and lack of access to care combine to make diseases worse,” Franke added. “On the other hand, bringing care delivery, training and research together the way we are in the endTB project can be a kind of virtuous cycle, where each turn of the wheel brings better care, improved health and greater well-being.”

EndTB is an international partnership with leaders from PIH, Harvard Medical School, Médecins Sans Frontières, Interactive Research & Development, the Institute of Tropical Medicine in Antwerp, and Epicentre, along with financial partner Unitaid.

While recent announcements of a price reduction for bedaquiline and expected reduction for delamanid are welcome news, researchers on the study said, more must be done to improve treatment guidelines worldwide and scale up treatment with these new regimens.

“Our findings underscore the need for urgent expanded access to these drugs,” said Carole Mitnick, a senior researcher at PIH, co-principal investigator for endTB’s clinical trials, and a co-author of the study.

Dr. KJ Seung, who has been fighting tuberculosis with PIH since 2001, urged the World Health Organization and national governments in April 2019 to quickly implement new treatment plans for severe TB, in an op-ed published in The Lancet Global Health and co-authored by Dr. Cathy Hewison of Médecins Sans Frontières.

“This (new study) absolutely validates (Seung and Hewison’s) call for faster rollout of regimens containing bedaquiline and/or delamanid,” Mitnick said. “These results support the continued evaluation in global and national policy recommendations to support these drugs in regimens.”

Mitnick said data used in the new study has contributed to a recent update to WHO guidelines for TB, “which certainly strengthened the recommendations for bedaquiline.”

The need for better treatments for multi-drug resistant tuberculosis is dire.

The WHO estimates that there are nearly 500,000 new cases of MDR-TB per year and that nearly 200,000 people die each year from MDR-TB. In 2018, only one out of three patients were put under an effective treatment, and among those who were, only half were cured.

With the historical standard of care and even with some newer regimens, certain subgroups of patients, including those with HIV or Hepatitis C, or diabetes, experience worse treatment outcomes than patients without these conditions.

In addition, these conditions can preclude patients from participating in some clinical trials for the new TB drugs.

It’s important to examine if these subgroups experience any of the benefit from the new regimens that might be observed in healthier subjects, the researchers said.

The endTB study showed that for the new regimens, early treatment response was similar for patients without serious comorbidities or other complicating factors and for those with diabetes, hepatitis C, and severe drug resistance.

The results are based on an analysis of early treatment results from more than 1,000 MDR-TB patients who had been enrolled in the study between April 2015 and March 2018. The study examines outcome from 6 months into a treatment that lasts 15 months or longer. Long-term effectiveness will be measured at end of treatment and during follow-up.

“The early results from these studies offer convincing evidence that these new regimens offer a very promising alternative to the historical regimens that achieve approximately 60 percent success at end of treatment, and to other new treatments that are becoming available,” said Mitnick, who is also an associate professor of global health and social medicine at Harvard Medical School.

“We’re eager to follow these patients as they progress through treatment in order to verify the effectiveness of these new regimens,” she added.

Observational research makes many important contributions to improving treatment outcomes for complex illnesses in complicated populations that it is critical to continue research efforts past the stage of clinical trials in illnesses like tuberculosis, the researchers said.

While tuberculosis has nearly disappeared in wealthier populations, it remains a critical threat to communities with fewer resources. A big part of the challenge of treating MDR-TB is finding regimens that will work in low-resource settings with complex populations that often include great diversity, including many people who might be undernourished and sick with other illnesses.

The partnership is also studying the safety of the new regimens. Preliminary results suggest that side effects from the new regimen may be much less severe than the historical treatment, which has been known to cause deafness and psychosis.

“TB is well-controlled where control is easy,” Mitnick said. “We need to find better ways to treat it where it’s difficult.”

The global reach of endTB has now provided clinicians with invaluable hands-on experience with bedaquiline and delamanid and helped change country guidelines, getting the new drugs registered for use in more than half of endTB’s 17 countries, the researchers said.

The endTB partnership is using the same model for promoting innovation to prepare for what they hope will be the next change on the horizon in care for DR-TB: all-oral, shortened regimens, which are being studied in the current phase of endTB’s clinical trial.

While the implementation program continues to roll out and hopes to reach new patients, the endTB trial has enrolled 465 patients with MDR-TB in new, all-oral regimens that could transform care for drug-resistant TB.

The all-oral regimens used in the endTB observational study and the shortened all-oral regimens studied in the trials would be particularly helpful during international health crises like the coronavirus pandemic, the researchers noted. These all-oral regimens are much easier to deliver in routine times and especially so in times of extreme crises that affect health systems (pandemic, war, disasters).

“The majority of these regimens were without an injectable, so people didn’t have to go to health facilities daily to get injected as part of their treatment,” Mitnick said. ”That certainly is helpful at a time when there is enormous pressure on health systems and TB services have been pretty much decimated by the COVID-19 outbreak.”

This story was originally published by Harvard Medical School.

See how in Sierra Leone, PIH helped 12-year-old Cylian B. Kargbo beat multi-drug resistant tuberculosis and get back to planning for her future.