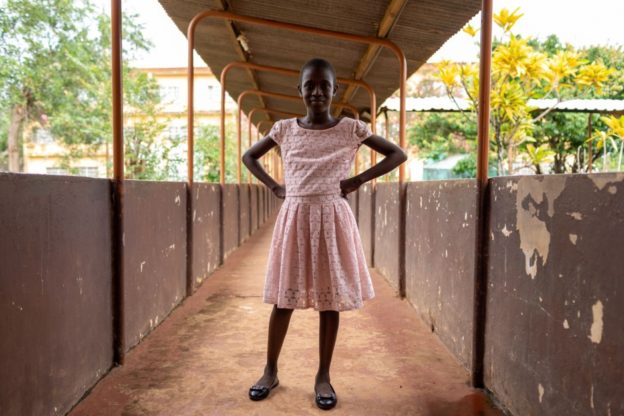 Cylian B. Kargbo is planning for her future. “My birthday is coming up!” the 12-going-on-13-year-old from Calaba Town, Sierra Leone, proudly announced, looking ahead a few weeks when she would celebrate with, first and foremost, “pizza!” Further down the line, Cylian has even bigger dreams: “I want to be a lawyer—study abroad, then come back to Sierra Leone to help the people in my country.”

Warm, thoughtful, and fiercely intelligent, Cylian has a bright future ahead, from her next month to her next 10 years. But it wasn’t always guaranteed. Plans for law school or even a birthday party began slipping away when, last July, she experienced her first symptom of multidrug-resistant tuberculosis (MDR-TB).

“Side pain,” Cylian remembered simply, citing the reason her family first took her to Ola During Children’s Hospital the capital city of Freetown. There, she was diagnosed with and treated for malaria, but her pain persisted. By October, said her father, Manso Kargbo, it got so severe that Cylian was unable to sleep.

Another trip to the hospital resulted in a diagnosis of tuberculosis (TB). But even TB drugs did nothing to improve Cylian’s health, which was deteriorating faster and faster. By the third week spent in her local emergency room, Cylian was in and out of consciousness, on oxygen, and unable to digest food. The Kargbo family’s friends and neighbours suspected witchcraft, and suggested that Cylian be seen by a traditional healer.

Doctors and nurses had another theory: MDR-TB, the drug-resistant strain of the world’s leading infectious disease killer.

An Escalating Illness, and a Lifesaving Partnership

Though TB was eradicated long ago in most wealthy parts of the world, poverty and a lack of strong health systems have allowed it to plague Sierra Leone, where, according to the World Health Organization, roughly 300 cases of TB are found per 100,000 people. For comparison, high-income countries find less than 10 new cases of TB per 100,000 people—around the rate at which MDR-TB cases present in Sierra Leone. The specialized drug regimens and care required to cure patients with MDR-TB were never available in the country, leaving countless people to die and the deadly airborne disease to proliferate.

This unjust reality faced a turning point in April 2017, when Sierra Leone’s National Leprosy and Tuberculosis Program, led by Dr. Lynda Foray, and Partners In Health (PIH) jointly established the country’s first and only MDR-TB treatment program, located at Lakka Hospital in Freetown. The National Tuberculosis Program brought in the critical equipment to diagnose MDR-TB, the lifesaving drugs to treat it, and the hundreds of team members to deliver the care. Despite this commitment, a gap remained—which PIH swiftly filled.

PIH infused Lakka with the other resources necessary to cure MDR-TB: a robust supply chain to ensure the availability of critical equipment and drugs for managing TB complications; the addition of clinical mentors with expertise in the disease; and continual building renovations to make receiving and delivering care more comfortable and dignified.

Together, Sierra Leone’s Ministry of Health and Sanitation (MOHS) and PIH also ensure 24-hour electricity and running water at the facility, in addition to providing support packages to outpatients who couldn’t otherwise afford food or transportation to the hospital for check-ups.

So far, clinicians at Lakka have treated more than 322 MDR-TB patients, and have seen a cure rate of 74 percent—among the best success rates globally, even with only a handful of doctors working specifically on TB within the country.

Support from the government and PIH arrived at Lakka not a moment too soon, and neither did Cylian. “When they referred me to Lakka, I was unable to walk, I was unable to eat for myself,” she said. Nor was she able to stand or sit on her own. “Her condition was so critical,” Kargbo said. “There was no flesh; only bones. You could count her ribs.”

Dr. Rashidatu Fouad Kamara, MOHS lead clinician at Lakka; Dr. Mariama Mahmoud, the facility’s now medical superintendent; and TB doctor Dr. Michael Mazzi reassured Kargbo that his daughter would get better, and immediately began her on treatment. This consisted not only of medication, but also food, which her body desperately needed to tolerate harsh MDR-TB drugs and grow stronger. PIH and the National TB Program began a special meal program, with foods rich in protein and fat, and asked Cylian what she liked to eat. Fried rice, her favorite, became a regular menu item, and was arguably as essential as drugs.

“With that special food, it was like magic,” Kargbo said. “Cylian’s health was changed within two months. She started to walk. Dr. Kamara and Dr. Mazzi exercised with her every day.” This success inspired hospital staff to introduce enriched meals to other TB patients in similar situations; today, they equally benefit from an enhanced diet.

Kargbo stayed with his daughter for more than one month as she recovered, then sent one of Cylian’s cousins to stay and keep her company. But even in the family’s absence, he knew Cylian was in good hands. “I’m so grateful,” he said. “It was not only the nutrition and feeding they provided to Cylian, but they also provided psychosocial counselling. I think of that—to have people get close to Cylian, to embrace her.”

With this comprehensive health care, Cylian’s health only continued to improve. After five months at Lakka, she was healthy enough to be discharged and continue treatment at home. And soon later, she was declared free of MDR-TB.

“Imagine—when Cylian was first taken to the hospital, she cannot walk, she cannot breathe properly without oxygen. Now, she can breathe for herself. She can walk. She can eat. She’s gained weight,” Kargbo said. “With timely intervention, Cylian recovered within a short time. I can embrace my child in her healthy condition.”

A TB Advocate is Born

Cylian isn’t the only one looking forward to the days ahead; her father is, too. “I hope for Cylian to achieve all her dreams,” he said. “Whatever she wants to be, that will be determined by Cylian. And I will give her the support to reach those heights. If you have a dream, you must have somebody to help you reach it.”

Last March, hinting at what type of attorney she might someday become, Cylian urged her government and PIH to continue fighting to eradicate TB and MDR-TB in Sierra Leone and around the world. Paying a visit on World TB Day to the facility that helped save her life, she shared her story in front of patients, staff, and Dr. Alpha Wurie, Sierra Leone’s Honourable Minister of Health and Sanitation. Her speech ended in an appeal for more support for Lakka, and for others to seek treatment there.

“We beg other patients who have TB, do not sit in your house,” she said. “Let them come and see the doctor and they will give them the right medicine.”

See how PIH’s MDR-TB program helped Bobby Togar say farewell to the grave and become an advocate for other TB patients in Liberia.