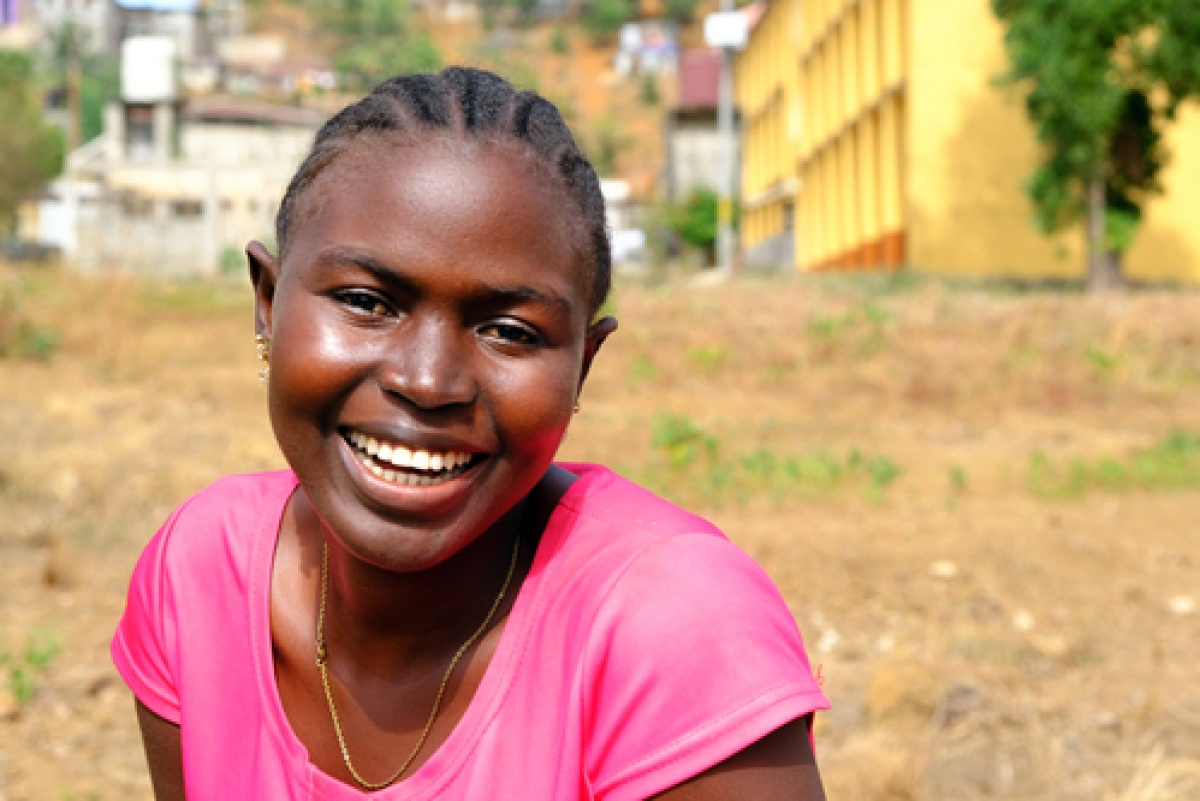 At the center of the campus of Lakka Government Hospital, a mango tree stands, its wide branches offering a shaded gathering spot for patients looking for conversation and camaraderie. Many of them have lived at the hospital for months, with even more challenging treatment still ahead.

“They call each other outside, gather under the tree, chat, talk about personal issues,” said Dr. Girum Tefera, Partners In Health’s clinical consultant at Lakka: the only dedicated tuberculosis hospital in Sierra Leone, located on the outskirts of capital city Freetown.

For one patient at the hospital, however, the tree was a symbol of anguish and adversity, rather than a source of comfort or connection. In June 2019, Saffiatu Sesay was brought to Lakka paralyzed from the waist down and unable to breathe easily. After two battles with tuberculosis the year prior, a lab test indicated that the disease had reemerged in its deadlier, harder to treat form: multidrug-resistant tuberculosis (MDR-TB). And based on her paralysis, it had worked its way into her spine.

Forced to abandon school in order to undergo inpatient treatment—and with zero mobility and exhausted by her illness—the 26-year-old, when she wasn’t sleeping, spent her time staring outside, watching groups of patients underneath the mango trees.

“Each time I looked outside my window, I felt bad—remembering how I was before, realizing I was unable to do anything for myself,” Sesay said. “I could not go out and see the world.”

When Sesay arrived at Lakka, clinicians were optimistic about her prognosis.

Tefera, who joined PIH Sierra Leone shortly before Sesay’s admission, brought years of experience from working in one of Ethiopia’s MDR-TB Centres of Excellence and with PIH’s endTB project. He had successfully treated cases of spinal TB before and had not only the necessary knowledge and experience, but also the tools to do so at Lakka.

Just three years earlier, this wasn’t the case: It wasn’t until 2017 that such treatment existed in Sierra Leone, when PIH and the government’s National Leprosy and Tuberculosis Control Program established the country’s first MDR-TB treatment program at Lakka, and partnered to improve and expand care there. The National TB program introduced never-before-available MDR-TB drugs, as well as diagnostic equipment and additional clinical staff to deliver this new kind of care.

Such investments have ushered in further growth: Whereas the partnership’s sights were once set on establishing infrastructure as basic as 24-hour electricity and running water, last year PIH and the National TB Program opened a high-dependency unit, providing clinicians the necessary space and equipment to care for critically ill patients. And whereas any MDR-TB medications used to be completely novel, together PIH and the government recently revised national treatment protocols to prioritize bedaquiline, the most newly developed oral tuberculosis drug, proven in part by endTB to be less toxic, more humane, and therefore more easily adhered to and effective.

All told, in a country where for decades MDR-TB was a death sentence, the National TB Program and PIH have built up Lakka as a tuberculosis hospital that cures 75 percent of its MDR-TB patients—a rate significantly higher than the global average of 57 percent, and one that would include Sesay.

Even with the most modern of health care, however, tuberculosis is a brutal disease whose treatment remains notoriously punishing. This is all the more true of its drug-resistant form, whose second-line treatment requires patients to increase their medication intake from the standard three or four daily TB pills to up to 20 daily pills, with a litany of uncomfortable and complicating side effects for up to two years.

Drugs and medical infrastructure are crucial to the success of treatment. But equally important, says Tefera, is care and support for patients’ mental health.

“In MDR-TB care, whenever we receive a new patient, the first thing we need to do is address their headspace,” Tefera explained. “What I usually do is pick one or two exemplary patients who came bedridden and now are mobile after getting the treatment, and call them to share their experiences and give the new patient advice in their same language.”

That support is vital for patients, especially those who are nervous or skeptical about the treatment.

“Because they come very sick, and having been through two or three phases of tuberculosis treatment that didn’t work out, they believe this time also not will not work out,” said Tefera.

It’s also difficult for patients to overcome the stigma that persists in Sierra Leone and around the world against tuberculosis—even with the cure rates seen at Lakka.

“During previous eras, people knew that a patient who contacted tuberculosis was going to die, because of absence of treatment and limited access to health care,” Tefera said. “And because of the infectiousness of the disease, when people realize a patient has tuberculosis, they no longer want to live with them. Most patients coming to Lakka don’t have adequate family support. They are typically poor and abandoned.”

In this way, Sesay was an exception: As she moved into the MDR-TB ward to begin inpatient treatment, she had the support of her older sister, Isatu, whom PIH helped move into a free room on hospital grounds. But as Isatu cooked, did laundry, and helped her sister bathe, the rest of the Sesay family agonized over the future.

Confined to her bed and swallowing 15 pills a day, she too had little hope.

“The doctors, especially Dr. Girum, constantly encouraged me and told me I would stand again and be okay. The nurses would talk with us, laugh with us, make us their best friends. And my sister was with me all the while,” said Sesay. “But I never thought I would walk again.”

“When TB involved with the bone, the progress you see is very slow. You don’t take the medicine today see the response tomorrow,” Tefera added. “Saffiatu was waiting, waiting, waiting, with nothing happening. There were times she was asking us to just go back home.”

To the Mango Tree

“She then started fighting,” Tefera said. “She was optimistic. We started giving her instructions on how to move, physiotherapy; we encouraged her to go outside with wheelchair. I promised her, ‘The first day I see your feet on the ground with no assistance, I will buy you a dress for you to wear out to dinner.’ At seven months, that was what happened.”

After seven months of treatment—sooner than Tefera predicted, or considers standard in a case of spinal MDR-TB—Isatu rushed to tell him and other Lakka clinicians the news: Sesay was standing on her own and, with support, could walk.

“It was not easy; I felt serious pain in my knees and legs, and I would fall down,” Sesay said. “But I was so excited.”

The rest of the hospital shared in her happiness.

“No one will forget that moment,” Tefera said. “It was a different day. We ran over and saw Saffiatu’s smile, and every patient was gathered, shouting and clapping, encouraging her, ‘Now you can join us outside.’ Starting then, nothing could prevent her from going out. She’s always outside, mixing with other patients, chatting with friends.”

The next month, Sesay was discharged to continue treatment at home, with monthly visits to Lakka for check-ups and medication refills. As part of standard care for Lakka patients, she received a stipend to pay for a taxi or motorbike ride to these appointments—an essential resource for patients facing poverty and distance as barriers to care. For Sesay, who returned home to her family, a four-hour drive away from the hospital, that social support was a lifeline.

“Even without the money from PIH, I would have looked for other ways,” Sesay said. “I would have sold my belongings just to come for my medicine—because I know what I went through at the hand of MDR-TB. I take it every day, since the doctor told me if I skip a day, the illness will reoccur.”

Her dedication paid off: After 14 months of outpatient care, on February 25, Sesay was declared cured of MDR-TB.

“Something to Look Forward To”

Sesay, now 28, is looking ahead to the future.

PIH, including PIH Program Officer Armah Quist, is there to support her as she takes her next steps. Quist, who manages social support programming at Lakka, is an advocate and confidant for many patients at Lakka. Her bond with Sesay endures, and she frequently thinks back to a conversation they had:

“There was a time she sent for me, and when I arrived at her room, she said, ‘After here, I don’t know what my life will look like. I’ve lost almost everything.’ I told her, ‘Coming out of this hospital, you will be a better person. You will be healed again, you will be whole again, and you will have something to look forward to.’ And I asked her, ‘What do you want to do?’”

Sesay responded that she wanted to return to school—and in a later phone call, got more specific.

“She said, ‘I want to be a nurse.’ So we’re pushing that forward,” Quist said. “When Saffiatu thinks all hope is lost, that’s why we are here as PIH. We come to support these kinds of patients to give them hope again. I’m here for her. We are all here for her.”

Quist is currently working with Sesay on plans to restart her education—with funding from PIH and an eye towards eventually entering a nursing course. One day, Sesay hopes to deliver the same lifesaving care and support—material and moral—she received at Lakka.

“If it hadn’t been for the help of the good health care workers at Lakka, it would have been a different situation for me. I want to give back to other sick patients,” she said. “One thing about this health condition is: If you have people who encourage you a lot, you will survive.”

When Abelino Hernandez was diagnosed with TB, PIH in Mexico supported him by providing housing and social support. Read more about his story here.