Into the Light: Treating Schizophrenia in Chiapas 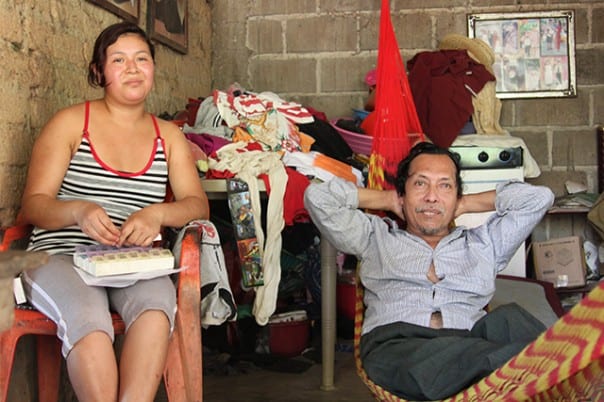 Dr. Enrique Valdespino had no idea a man lived locked inside a shack three blocks from the clinic in rural Reforma, Chiapas, where he practiced medicine. Nor that the man, 52-year-old Rosemberg Lopez, had been living there for years.

The news floored him. Especially since Lopez’s parents came in for monthly checkups and his sister visited his clinic regularly.

“They were not talking about him, asking for help, considering we could do something for him, or trying to incorporate Rosemberg into society again,” says Valdespino, who was just out of medical school at the time and working with Compaňeros En Salud, as Partners In Health is called in Mexico. “For everyone in Reforma, Rosemberg was dead.”

Unfortunately, Lopez’s story is not unique. Few patients living with schizophrenia in the highlands of the Sierra Madre have ever received a proper diagnosis or consistent treatment. Their families, mostly poor coffee farmers, know something is wrong and do what they can.

Sometimes that means traveling hours by public transportation to the closest psychiatric hospital, where their loved one receives a diagnosis and a prescription for psychotropic medication. Other times they go to a traditional healer who provides them with a “cure” against witchcraft. But when families can’t afford the medicine or traditional remedies fail, they are left with few viable options. And so they chain or lock up their family member to protect themselves and others from harm. It’s meant as a temporary measure, but can become a life sentence.

Doctors like Valdespino have seen this story play out time and again in the 10 clinics PIH supports in rural Chiapas. They discuss schizophrenia with patients’ families and connect them with specialized care in psychiatric hospitals, where patients are formally diagnosed. They and a cadre of community health workers monitor patients’ progress once they return home. The team’s work is supervised by PIH’s mental health coordinator in Mexico, who is in turn supported by a Boston-based mental health team.

Schizophrenia afflicts four of every 1,000 people in Mexico, according to the World Health Organization. Symptoms typically start in patients’ 20s and can include delusions, hallucinations, disorganized speech or thinking, and social isolation. Medication and psychosocial therapy help patients manage the condition, but they are rarely available in poor, rural regions of the world. In 2012, only four psychiatrists were working in public facilities in Chiapas, a southern state with 4 million people. 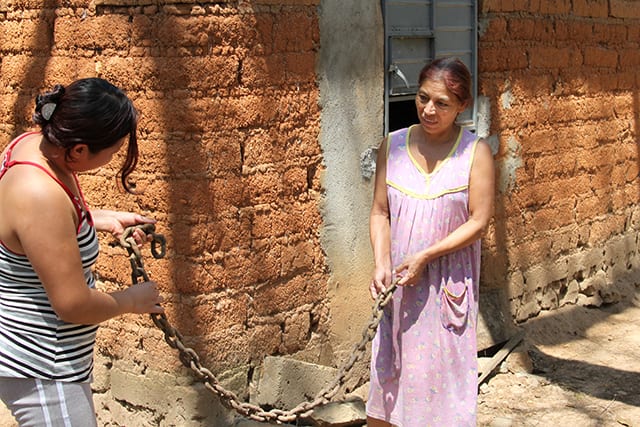 Velasquez (left) and Mirian Lopez stand in front of the shack where Rosemberg
lived for six years and hold up the chain that used to restrain him.

Lopez was 25 when his symptoms emerged. He had hallucinations and grew increasingly paranoid. He ran along the streets, sometimes naked, cursing and throwing rocks at people. He carried a machete and menaced children and teachers at the elementary school. Sometimes he ran away for days at a time to live in the grassy hills encircling the small community.

“He mistreated us, threw food, and ran after children,” says his sister, Mirian Lopez. He got so angry once that he punched their mother, Jiménia Borias, in the face.

“Everyone in the community was afraid of him,” Borias says.

His family thought Lopez was possessed by an evil spirit, so they took him to a witch doctor and tried to treat him with herbs and other natural remedies. When that didn’t work, they traveled to doctors in neighboring communities. Some wanted to operate on him. Some claimed there was nothing wrong. Others said what he needed was good, hard work.

Nothing helped. Finally, they sedated Lopez with help from neighbors and traveled five hours via public transportation to the state capital of Tuxtla-Gutiérrez, home of the nearest psychiatric hospital. He was diagnosed with schizophrenia, put on psychotropic medication, and experienced a dramatic recovery during his two-month stay.

Once back home, though, Lopez lost the gains he’d made. Paranoia made him think his pills were poisonous, and that his family was trying to harm him. His medication was also expensive, more than the family could afford on their limited coffee income. And the local clinic wasn’t functioning at a level to provide consistent care. Whenever the situation got out of control, his family returned to Tuxtla-Gutiérrez to have him admitted for treatment. But this, too, was hardly a sustainable solution.

Feeling ashamed and helpless, Lopez’s family decided there was only one thing they could do to keep him close and safe; they built a mud-brick shack behind their home and locked him inside. There he stayed for six years, a small window his sole source of light and contact with the outside world.

‘A sickness that has a name’

Eudeli Velasquez was a schoolgirl in the early days of Lopez’s illness and remembers him wandering around Reforma with a machete. She says she used to walk by the locked shack years later and think: “When I’m big, I want to earn a lot of money to get him out of there.”

Velasquez, now 23, was among the crowd of onlookers the day PIH staff came and coaxed the man out of his shack one bright day in September 2014.

Lopez walked unsteadily into the sunlight. His unkempt hair stretched down his back. His beard reached his waist. Every rib jutted out from his emaciated chest. He cringed at the attention, his sister remembers, and begged to go back into the dark and stagnant space where he had eaten, slept, and relieved himself for so many years.

PIH staff beckoned Lopez forward and walked with him to a nearby PIH truck, which they drove directly to the same Tuxtla hospital he’d visited years earlier. This time, he stayed 16 weeks and returned home a changed man—his hair trimmed, his beard gone, and his weight back to normal.

The community had changed too. Valdespino had finished his service year, so another PIH-supported doctor staffed the local clinic. And a group of 10 women, including Velasquez, was training to become Reforma’s first community health workers. Their primary task was to monitor the health of patients diagnosed with chronic diseases like diabetes, hypertension, or mental illness.

Velasquez knew right away she wanted Lopez among her patients. Early on, she made multiple daily home visits to ensure he took his medication. And she regularly swings by now, a year and a half later, to check on him.

“People said that he was crazy, but it’s a sickness that has a name,” she says.

On a scorching morning in March, Velasquez popped into the Lopez family home to check on her patient. Lopez was stretched out in a hammock, gently swinging in the shade of the back porch. He broke into a guileless smile when his community health worker took a seat beside him.

His mother and sister hovered in the doorway, while Velasquez opened each lid on Lopez’s pillbox to review his medication. Their voices dropped when they talked about the dark days of his illness. About their shame and sadness. And about the violent episodes that hardly seemed to have come from the quiet man relaxing nearby.

Velasquez walked with mother and daughter back to the shack, still standing though vacant, in their backyard. A thick, rusty chain snaked across the red dirt nearby. Mirian and Velasquez picked it up and demonstrated how it used to link Lopez to a nearby tree. His mother looked sadly at the chain, but didn’t touch it.

“Thanks be to God for the doctors,” Borias says. “He now lives together with us; he eats with us. He’s not returned to how he used to be.”