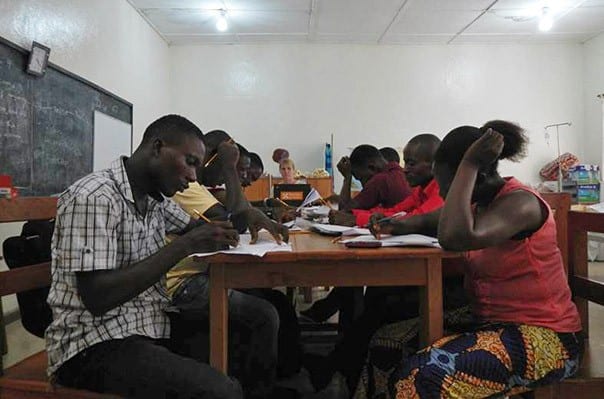 Photo by Christina Congdon for Partners In Health

At the Liberian national nursing exam, a stressful two-day affair at a dilapidated hospital in the capital of Monrovia last month, 10 students stood out even before the first pencil was raised. They were in their early 30s, unmarried, and sharply dressed. They looked just like their dozens of contemporaries from private universities in the north, but word quickly spread that these ten were from a public school, called Tubman University, 20 hours’ drive south. “The other students could not believe that people from a rural part of Liberia were going to sit the exam,” recalls Malcom Smith, a Tubman student in the exam.

Smith and his schoolmates didn’t just sit it, they aced it. A couple weeks later, the Tubman students found out they had all passed, becoming the first graduates from a public university to earn a nursing license in Liberia in decades. “I am so happy,” says nurse and Tubman graduate Joe Davies.

So are others, including friends at Partners In Health, who had a chance to help the class along. The nurses triumphed over huge challenges. And if Liberia is going to rebuild its civil-war-battered, Ebola-splintered health system, then it needs pioneers like Tubman’s new nurses to prove that great things can be achieved in the face of long odds.

“We are so proud of these nurses and so incredibly happy for Tubman University,” says Heather Bedlion, PIH’s director of nursing in Liberia.

The nurses entered primary school during the beginning of the Liberian civil war, a bloody struggle that lasted, with brief respites, from 1989 to 2003 and killed some 250,000. They studied through the crossfire, the drugs, the rival warlords’ ritual killings.

Peace didn’t make things easy. After graduating from high school, they had the choice of attending roughly a dozen expensive private schools, mostly far away in the cosmopolitan north, or nearby Tubman University, which offered a nursing program starting only in 2009. They all enrolled in that inaugural class, became friends, and studied hard, some using textbooks for the first time. “People can’t even imagine the work these students had to do to get where they are,” says Iona Thomas-Connor, chair of Tubman’s department of nursing.

Ellen Johnson Sirleaf, the president of Liberia, spoke at their graduation in June 2014; sadly, she was also the one to share a fresh batch of bad news just weeks later. With the Ebola epidemic looking like it might spiral out of control in Liberia, Sirleaf clamped down on non-essential travel and the annual nursing exams were postponed indefinitely.

The students did not sit idle. They worked as aides at a nearby hospital, sanitized the Harper Ebola treatment unit that PIH helped operate, checked temperatures at road blocks, and more. According to The Lancet, nearly 10 percent of the doctors, nurses, and midwives in Liberia, some 83 health care professional in total, died from Ebola, many during that fall. The students survived in part thanks to their vigilance, in part thanks to arguably their first bit of good luck. Compared to the rest of the country, their corner of Liberia got off easy with just a few dozen cases.

After the Ebola epidemic began to come under control in Liberia in December 2014, the make-up exam was scheduled for June 4 and 5, and the students started the hard task of refreshing their memories. PIH clinicians, assisting the Ministry of Health in rebuilding the health system, jumped at the opportunity to work with professors at Tubman University to organize formal review classes. Nurse and short-term clinician Cristina Congdon led all-day tutorings each Saturday for three weeks and then a three-day cram, complete with practice tests.

The group finally arrived in Monrovia in June. Day one of the exams covered general medicine, surgery, obstetrics and gynecology, and communicable diseases. Day two, pediatrics and psychiatry.

They breezed through each test in less than the two hours allotted. “We were the first to finish every time,” recalls nurse Davies. “The test was like a study session, like a mirror before us.”

Perhaps even better, fully nine of the 10 have returned home to apply for jobs in the slowly growing number of clinics in the rural south. Rather than seek bigger salaries at hospitals in northern cities, they will consult with thousands of patients who have never had the chance to talk with an expert in scrubs.

“We call ourselves the Agents of Change,” says nurse Davies.