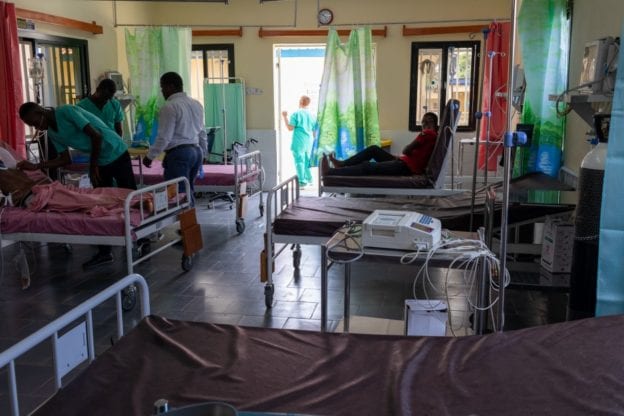 There was a gentle hum of conversation as Doris Miatta Komba moved swiftly between the beds in Koidu Government Hospital’s emergency ward. The 32-year-old Ministry of Health nurse is in charge of the new emergency department, a critical area of care that didn’t exist until this May. Her attention was caught by a monitor at the far end of the room. She signaled to a second nurse, who moved to her side and placed two fingers over the wrist of a patient lying attached to the monitor by a clear tube.

The patient—who is male, in his mid-thirties—was admitted to the emergency ward the day before with hypertension, and if it hadn’t been for the timely care he received from these nurses, he would have likely died. He lay in one of six beds in the ward, all of which were occupied by patients with serious and urgent medical conditions, while Komba and her team delivered the specialist care they have been trained to provide.

Koidu Government Hospital, or KGH, is the only hospital in Sierra Leone outside the capital of Freetown to have an emergency ward. It serves a population of more than 500,000 people in and around Kono District. Staff are proud to be pioneering an approach to the care of critically ill patients that could, in the future, be replicated at other hospitals across the country. Since opening in May, more than 430 patients have been admitted and treated at the emergency ward.

Before the hospital’s emergency ward opened, patients admitted with acute, serious medical conditions needed to wait for a bed to become available in one of the main wards before they received the care they desperately needed.

“We can now identify the sickest patients and provide timely care,” said Dr. Chiyembekezo Kachimanga (or Dr. Chembe, as he is known across PIH), clinical educator for PIH in Sierra Leone. “The moment a patient arrives, they are attended by a nurse who is consistently there. Two nurses are on shift at all times. And the emergency medicines are all there too; a pharmacist comes every morning to top them up. Quick access to the right medication and care is a crucial time-saver when treating someone who is critically ill.

“With this department,” he added, “we hope to reduce mortality at KGH. If we manage symptoms quickly, patients are less likely to die.”

The emergency ward operates alongside a triage system introduced earlier this year. At triage, a patient’s symptoms are categorized by a clinician into one of four colors: red and orange flag a need for immediate medical attention, and green and yellow signify regular clinical care. Since May, 75 percent of all patients admitted at KGH have required acute medical care, and 11 percent of these patients were flagged as orange or red and so referred straight to the emergency ward.

The patient that Komba has successfully stabilized was marked as red at triage the day before. “Hypertension symptoms usually cause the patient to become unconscious or have severe breathing problems,” she shared. “All of the vital signs are usually off, so they need a lot of support.

“When patients initially come to the emergency ward, they are afraid,” she said. “It is our job not just to assess them, but also to assure them.”

Komba and her staff do this medical and emotional work, all while carrying out an “ABCD” assessment—checking for airway obstructions, breathing issues, circulation irregularities, and disability or dehydration.

After completing the ABCD assessment and successfully stabilizing her patient that day, Komba called the attending doctor to complete a follow-up examination and prescribe the required medication for hypertension.

The emergency ward has slotted into KGH’s other operations seamlessly. Having a well-equipped, separate space for treating critically ill patients has relieved a huge amount of pressure from hospital staff. Previously, they were required to treat these patients, who were dispersed throughout the hospital’s wards, making it difficult to provide the necessary focused, specialist care.

Clinicians now ensure that all patients are triaged upon arrival at KGH. When patients are discharged from the emergency ward, usually after three to four days, they are able to provide appropriate recovery care in one of the hospital’s regular wards.

Chembe was initially surprised to learn that the most common patient cases admitted to the emergency ward are related to non-communicable diseases, such as hypertension, diabetes, and hepatitis. “When we opened the ward, we didn’t anticipate this would be the case at all,” he shared. “Once patients have been stabilized, we link them directly with the NCD clinic. Our aim is always to make sure that once we discharge patients, they have enough medicine to tide them over to their next NCD appointment.”

The emergency ward’s clinical team, made up of Ministry of Health and PIH staff, has received in-depth training on both the new triage process and emergency medicine to ensure that patients receive the best possible treatment. Chembe, Komba, and Moses Bangura, a PIH clinician working at KGH, travelled to Liberia in May to receive a two-week training in advanced emergency clinical care from PIH Haiti leaders. And in January, 30 PIH and Ministry of Health staff in Freetown and Kono will receive additional training on the management of critically ill patients, especially those suffering from respiratory distress, shock, trauma, and an altered mental status–all common reasons for emergency care in Sierra Leone.

“I am still organizing training topics for emergency care,” Chembe shared. “I want it to become a continuous training schedule. Our clinicians have provided feedback that they want more training—they want to keep refining their skills and to gain a deeper understanding of the science behind why certain procedures need to happen.”

The emergency ward at KGH marks a bold step in strengthening the health care system in Sierra Leone. As word spreads about its quality services, critically ill patients are travelling hours to get treatment, from the capital of Freetown and as far away as neighbouring countries, such as Guinea.

“When patients see after three days that they are feeling better, they are so appreciative and happy,” said Komba proudly. After stabilizing her hypertensive patient, and with his medication stored safely in her cabinet, she could rest assured that she had done everything she could to save his life, something that might not have been possible just five months ago.

See how PIH leaders in Haiti are sharing the results of their innovative emergency medicine model as a means to inspire other countires to scale up emergency care.